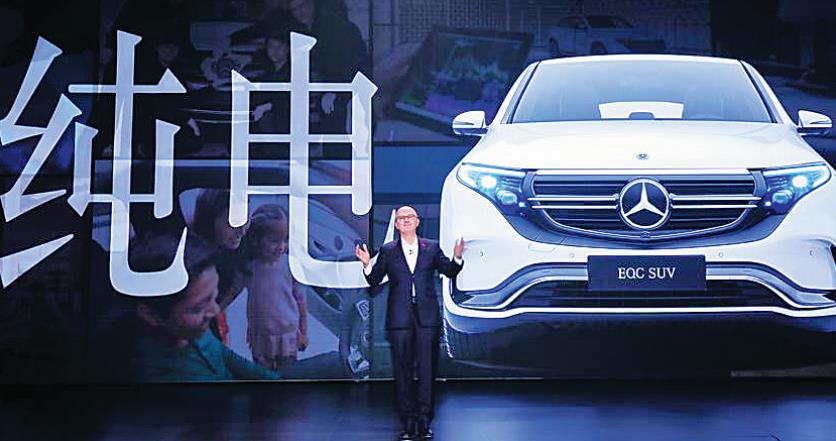 Mercedes-Benz launched its China-made and first electric model, the EQC SUV, in Beijing on Friday, underscoring its efforts to blaze a trail in the competitive new energy vehicle segment of the world's largest car market.

"For electric mobility, we can say without any doubt: if you make your mark in China, you make it anywhere," said Jan Madeja, president and CEO of Beijing Mercedes-Benz Sales Service Co.

China overtook the United States as the biggest market for new energy vehicles in 2015. From January to November, such vehicles' sales in China totaled 872,000, up 20.8 percent year-on-year, according to the China Association of Automobile Manufacturers.

The model sports the Mercedes-Benz User Experience system, which has a voice-controlled smart assistant that can be activated by saying "Hey Mercedes".

"The future of automotive mobility is electric, and China has the power and the spirit to shape this future. Mercedes-Benz is determined to play an active and important role in that exciting endeavor," Madeja said.

The EQC, which is made at its joint venture with State-owned BAIC Group, is the first example of Mercedes-Benz's electrified offensive in China.

"China is our second home. That's why we not only decided to bring the EQC to the Chinese market, we decided to produce it here," said Hubertus Troska, a Daimler board member. "When it comes to electric mobility, China is the place to be."

Madeja said the launch of the new EQC model is just the beginning of Mercedes-Benz's journey into electric mobility and 10 other models will hit the market by 2022.

China has been the world's largest market for the brand. It sold 57,142 Mercedes-Benz cars in October, up 13.8 percent year-on-year. Sales from January to October hit 583,032, up 5.8 percent from the same period last year.