Microsoft plans to tie up with local firms for AI edge 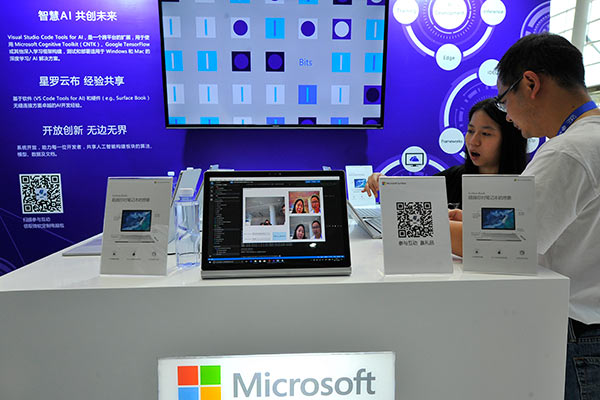 The US tech giant Microsoft Corp is ramping up efforts to bring its artificial intelligence prowess to China by teaming up with a string of local partners such as China Mobile, DJI and Peking University.

Harry Shum, executive vice-president at Microsoft, said on Monday the company will leverage all of its resources and technological edges in AI to cooperate with Chinese universities, research and development agencies as well as enterprises, in the hope of empowering businesses' digital transformation and luring more local developers.

"China is a most dynamic market where more than 400,000 software developers are using Microsoft's platforms and technologies to create applications. More importantly, 100,000 of them work with our AI-enabled tools. By having extended cooperation with China, we hope to find new opportunities in the country," Shum said at a Microsoft AI conference in Beijing.

At the conference, the company demonstrated how its Chinese digital assistant "XiaoIce," converses with humans over the phone by emulating people's voices and how it composes poetry.

On Monday, the Redmond, Washington-based company also announced plans to set up an open platform with four of China's most prestigious universities to share its AI data and tools, marking an accelerated push to compete with local players.

It will partner with Peking University, the University of Science and Technology of China, Xi'an Jiaotong University and Zhejiang University to create an open-AI platform, where students and professors can learn how to access Microsoft's AI resources to develop their work.

The move is in line with the Chinese government's national AI development plan which called for more efforts to cultivate AI talents so that the country can lead the world in its R&D and application.

Charlie Dai, head analyst at Forrester Research Inc, said Microsoft is injecting AI into all of its businesses, including its Azure cloud services, which are gaining stream in China. But the company also faces mounting competition from local players such as Alibaba Group Holding Ltd and Huawei Technologies Co Ltd.