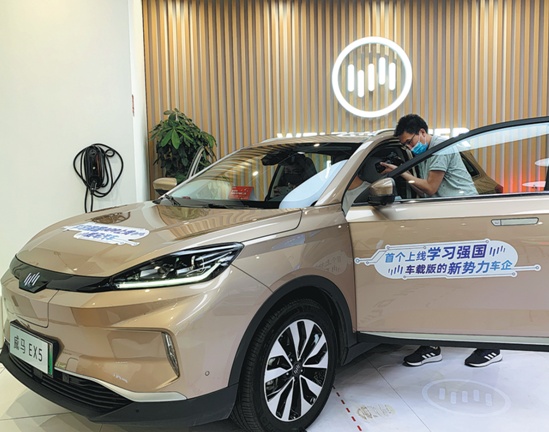 Visitors try out a WM EX5 SUV at a dealership in Beijing in July 2021. (Photo by Zhang Dandan/chinadaily.com.cn)

China's electric car market is growing fast, but a closer look reveals that it is mainly powered by cheap mini-sized cars of domestic brands and nice but pricey ones from Tesla and the like.

Over 940,000 electric cars were sold in first half of the year, up 244 percent year-on-year, according to statistics from the China Association of Automobile Manufacturers.

A breakdown shows that cars priced below 50,000 yuan ($7,720) accounted for one third, whose sales soared 500 percent, while those sold at above 250,000 yuan, seizing a 20 percent market share, grew faster than average as well.

The pattern is going to change in the coming decade, with the middle part expected to rise substantially like in the gasoline car market, said senior executives at local and international carmakers.

Shen, former executive at Geely and Volvo, said the boom resulting from low-price vehicles will not be sustainable as proven in the age of gasoline cars.

"There was a time when many carmakers thrived on minicars but they soon died out. History has shown us such vehicles cannot work for long," said Shen.

He said user experiences matter more today when cars are getting smart, and it would be financially impossible to manufacture smart cars with autonomous driving and other functions at prices lower than 150,000 yuan.

Unlike most startups in China, WM is targeting the volume car market. Its cumulative sales have exceeded 60,000 units.

"We have a firm strategy, which is to focus on the mainstream smart electric cars within the reach of most customers," said Shen.

It has launched three models, with one co-developed with Baidu. A fourth one, which is a sedan, will be unveiled later this year.

"We have a super strong low end and a super strong high end, but in the middle we have relatively moderate growth, which is the place Volkswagen and Toyota as well as Geely and BYD are playing."

He said the pattern is unsustainable and if it continues it will be difficult for China to realize the goal that new energy vehicles account for 40 percent of total car sales by 2030.

He also called for carmakers to launch more vehicles that can compete with mainstream gasoline models, which are usually priced between 150,000 yuan to 200,000 yuan.

Volkswagen is introducing five of its ID series electric cars into China this year. Woellenstein expects their combined sales to reach 80,000 to 100,000 units by the end of 2021.