Migrant workers return to work via chartered transport amid epidemic

A growing number of migrant workers are returning to work as companies across China gradually resume operations after a prolonged Lunar New Year holiday due to the COVID-19 outbreak. But unlike before, many of the return trips this year have been made through chartered transport.

On Friday morning, a total of 108 farmers from Renshou County in southwestern China's Sichuan Province set out for coastal Guangdong Province by taking chartered buses free of charge. The government-initiated campaign aims to provide the migrant workers a safe and smooth trip amid the epidemic.

"I was planning to take bullet trains back, but my three attempts to buy a ticket all failed, which made me very anxious. This activity organized by the government is very helpful. I'm really grateful," Wang Chunsheng, one of the migrant workers, told CGTN. 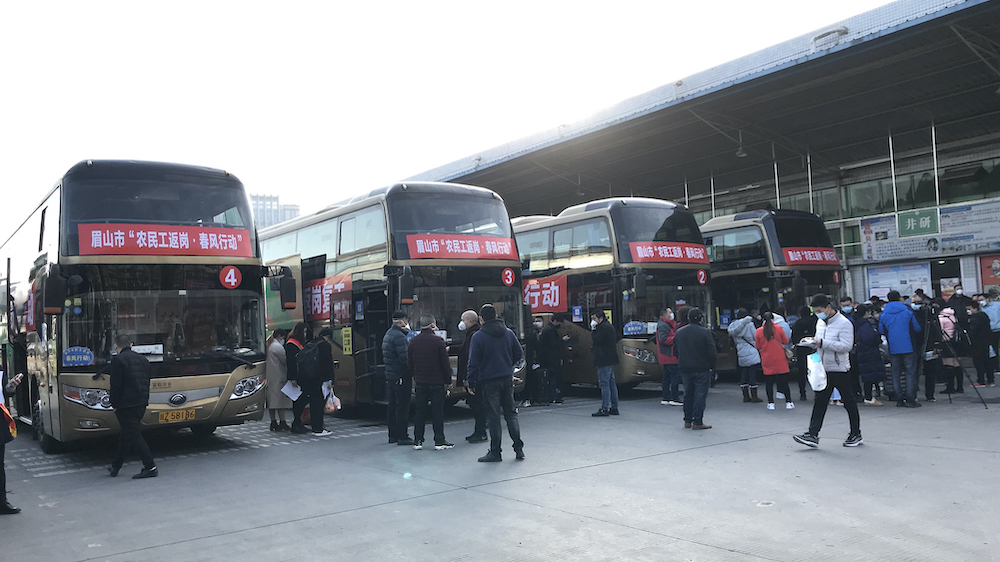 Four buses are chartered by the government of Renshou County in Sichuan Province to send migrant workers to Guangdong Province. (Photo: Li Yang/CGTN)

The destination of this trip is Shanwei city, some 1,800 kilometers away. The trip is expected to take about 30 hours.

Stringent precautions were taken before the buses hit the road. Each of the workers gets a certificate following a thorough health check. They are also provided with a manual on epidemic prevention, some masks and special insurance coverage. And the buses are carefully disinfected.

To reduce cross-infection risk, the number of passengers on each bus is only half of the approved passenger capacity. During the long trip, special measures are required to be taken, including strict temperature monitoring and adequate ventilation. 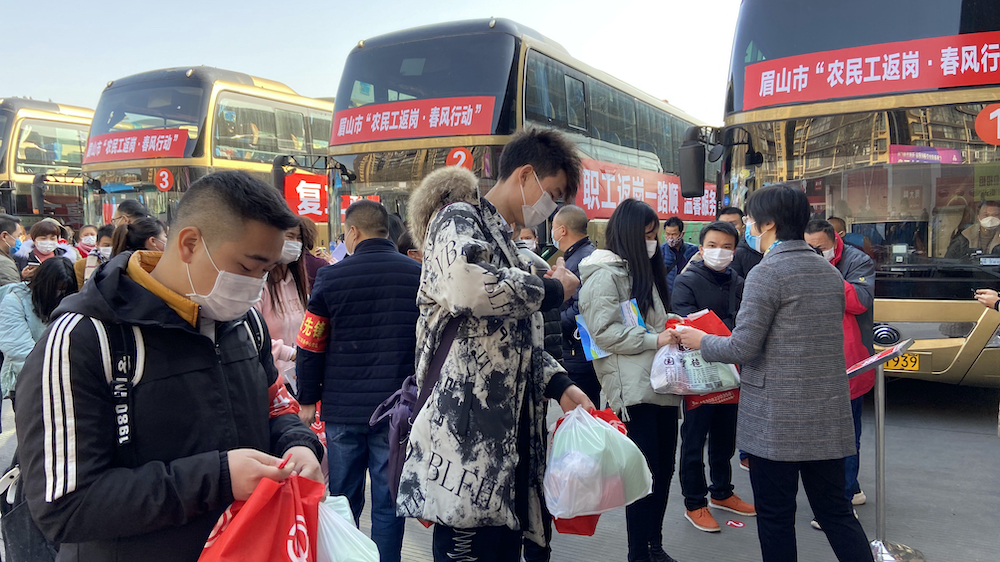 The migrant workers from Renshou County, Sichuan Province are provided with some special gifts before heading to Guangdong by taking chartered buses. (Photo: Yang Jinghao/CGTN)

Looking ahead to the upcoming tasks, many workers have mixed feelings.

Yang Li is a mother of two. She is among a few of those who leave her hometown to seek better employment opportunities for the first time. She said she is inevitably somewhat worried about the coronavirus, but she believes everything would be fine as long as they follow strict hygiene measures.

"As life goes on, I just hope I can restart work as soon as possible, so I can earn more money to help my children and other family members live better lives. Besides, I hope I can learn more skills by working outside my hometown," said Yang. Her thoughts are echoed by most of her fellow villagers.

Sichuan is a major labor outsourcing province, with an estimated 25 million laborers working across the country, mainly in provinces like Guangdong and Zhejiang where numerous manufacturing companies gather. To facilitate the migrant workers' return trips, multiple "point-to-point" transportation services are provided after different provincial governments established a good coordination and communication mechanism. Apart from buses, chartered trains and flights are also available.

Such practices can also be seen in some other provinces. In Fuzhou, the capital city of Fujian Province, the local government sent 98 chartered buses to bring 2,450 workers back to work from southwest China's provinces of Yunnan, Sichuan and Guizhou by Monday, Xinhua reported. 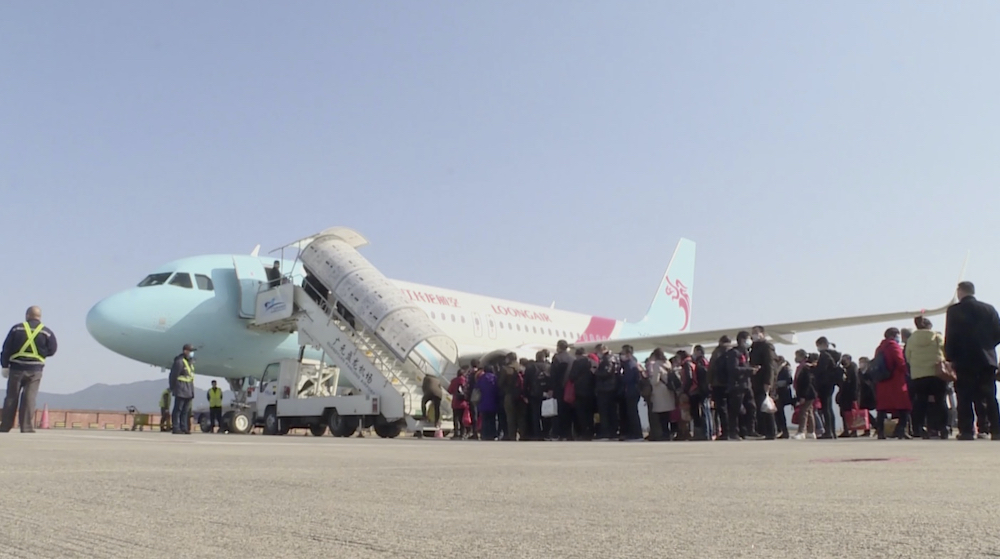 Liu Gang is the director of migrant workers' service center in Renshou. He has coordinated this bus trip over the past few weeks. He said such services are beneficial for both employers and migrant workers.

"An important purpose of this initiative is to help companies that are trying to resume production get enough labor forces. This will also help our workers get income in time to support their families," Liu said.

The nationwide virus containment has brought big challenges to enterprises of almost all sectors. After a mandatory delay of business resumption for almost half a month, they now face the problem of labor shortage, as restrictions on traffic are still imposed in many parts of the country.

According to the Ministry of Transport, some 120 million migrant workers are expected to return to their jobs by the end of February, bringing the workforce to about two-thirds of its full capacity. The remaining 100 million will return in March if the virus is brought under control. By then, most businesses nationwide are expected to be back to normal.