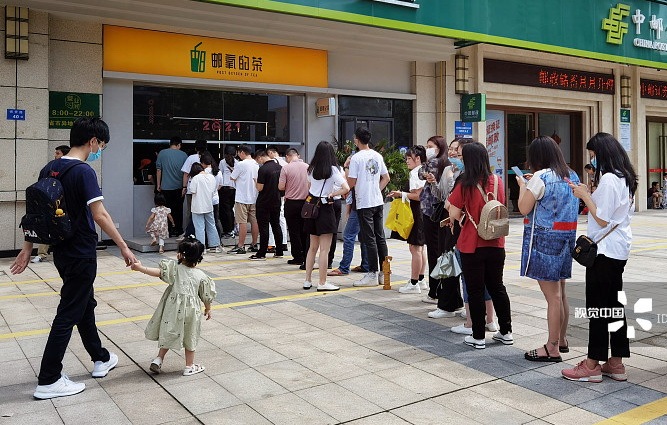 Customers line up to buy milk tea at Post Oxygen of Tea in Fuzhou, Fujian province, in June. (Photo: VCG)

Besides selling different drinks, the store also offers pastries, chocolates and some derivative products such as umbrellas and shirts.

Beibingyang hopes to attract more attention and help market its main business by opening a milk tea store. However, the company is unlikely to expand further into the milk tea business. The supply chain and store management of freshly made drinks would be a brand-new challenge compared to its original business, said Xiao Yao, partner at Ries, a global consulting group.

In addition, Swisse, an Australian vitamin and supplement brand, has opened three milk tea stores in Shanghai. The stores, named Swisseland, focus on maintaining beauty and staying young. They also sell supplements such as drinks with collagen proteins and sesame mixed in.

Swisse has been taking advantage of the reputation of its main business and taking a path of differentiated competition. Most consumers of milk tea in China are females born after 1990. The age group is willing to purchase new types of foods and drinks that focus on healthy living, low sugar and products that improve physical appearance.

"Swisse has a clear advantage in differentiating its products from others by selling drinks combined with supplements. Its brand reputation and discussions of milk tea stores can help generate customer flow. If it can offer drinks with good quality and taste, it would be easy for the company to draw more consumers," Zhang said.

Still, for companies whose main business is not beverage retail, their operations of milk tea stores will be limited to their original brand positioning. Consumers are unlikely to have a deep impression of their milk tea business, Zhang added.

Compared with China's leading milk tea chains Heytea, Coco and Nayuki, the milk tea business of other companies will have difficulty achieving market scale and having a noticeable impact on experienced brands. The operational efficiency of nonprofessional milk tea brands is likely to be affected by their main business, and resource allocation skills may not be in place perfectly, Zhang said.

As of September last year, China had 340,000 milk tea stores, including about 3,200 high-end shops, according to a research report by Zhongtai Securities.

Among total milk tea plays, more than 50 brands received funding from investors, and investment has often been made since 2016, according to Qichacha, a company that tracks business registrations. 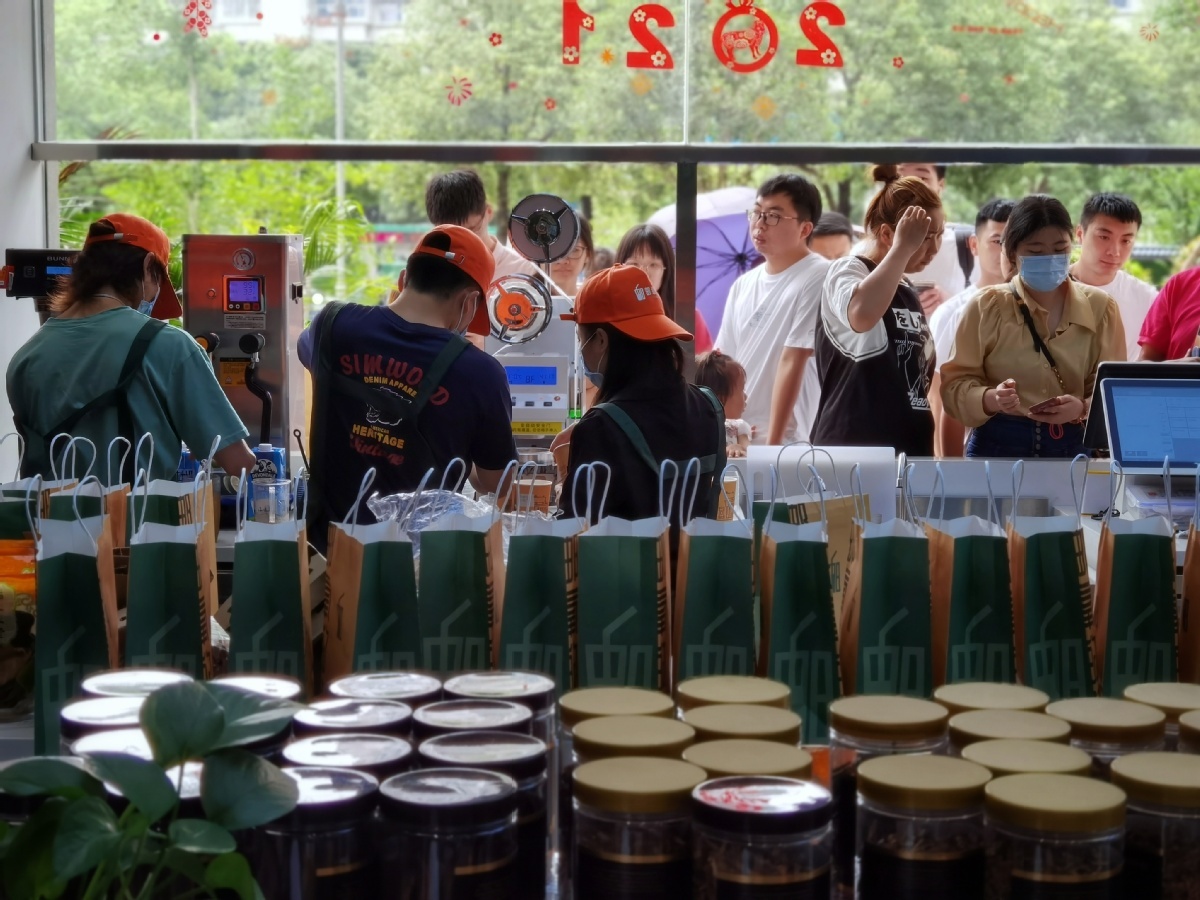 Employees of Post Oxygen of Tea prepare milk tea for customers at its store in Fuzhou, Fujian province, on June 6. (Photo: China Daily)

Milk tea has become somewhat of a national obsession and a booming business in China. Its popularity has fueled many retailers whose main activities lie elsewhere to open milk tea stores to generate extra revenue and attract more customers.

Named Post Oxygen of Tea, the store has recently gone viral online. Many people got to know the brand through social media sites like Weibo and short video app Douyin, as well as stamp collecting groups, as they are naturally curious about all things postal.

Opened late last year, Post Oxygen of Tea provides various drinks including traditional teas, or teas flavored with milk, fruits and other varieties. The beverages range from 7 yuan ($1.08) to more than 20 yuan each.

"China Post Drugstore is bullish on the growth potential of the milk tea sector and thus has opened a store to expand its business operations. It is expected to see growing business opportunities fueled by strong demand," said Zhang Weilin, an analyst at the LeadLeo Research Institute.

"The milk tea sector has been extremely popular in recent years, and it doesn't lack any attention from capital markets and social media platforms. A non-beverage retailer opening a milk tea business is in itself an eye-catching event,"Zhang said.

The store is located on the first floor and inside a China Post Drugstore in the Gulou district of Fuzhou. On the second floor, shelves are stacked with books and healthcare, and psychological counseling services by pharmacologists are also available.

It is common to see long queues outside the store for its popular drinks. Customers said it usually takes at least a half-hour wait to get a drink, and tea fans tend to linger on premises after ordering. The store doesn't have plans to open stores nationwide for now.

Lin Qingjing, store director of Post Oxygen of Tea, said: "Our original intention was to make the pharmacy more innovative and distinctive, and we didn't intend to open a commercial milk tea store that would become popular online. We didn't expect such popularity. Most pharmacies nationwide are ordinary and look a bit staid, and buyers won't stay long when they purchase medicines. We wanted to do something different to let people relax.

"Physical and mental health and happiness are equally important, and opening a milk tea store can help provide a lighthearted environment for consumers as they take their time to select medicines."

Last year, the number of consumers who bought bubble teas and related potables exceeded 340 million, and sales exceeded 100 billion yuan. With a constant consumption upgrade trend in China, annual sales are expected to hit 160 billion yuan within the next five years, according to LeadLeo.

Over the next two to three years, a large number of retailers are expected to open new milk tea stores, as the number of such stores currently in existence is far from reaching a saturation point in the country.

Over the long term, the business growth potential of a milk tea store depends on its core competence rather than some eye-catching short-term gimmicks. Core competence relies on stable and standardized product quality, the capability to research and develop new products, and the strength of comprehensive supply chains, LeadLeo added.

"Opening a milk tea store requires relatively low upfront costs and it can generate high gross profits. It can quite readily help companies create extra revenue, given the strong demand for milk tea among young consumers in China. That's a key reason why many non-beverage enterprises have expanded their business to the beverage sector,"Zhang of LeadLeo said.