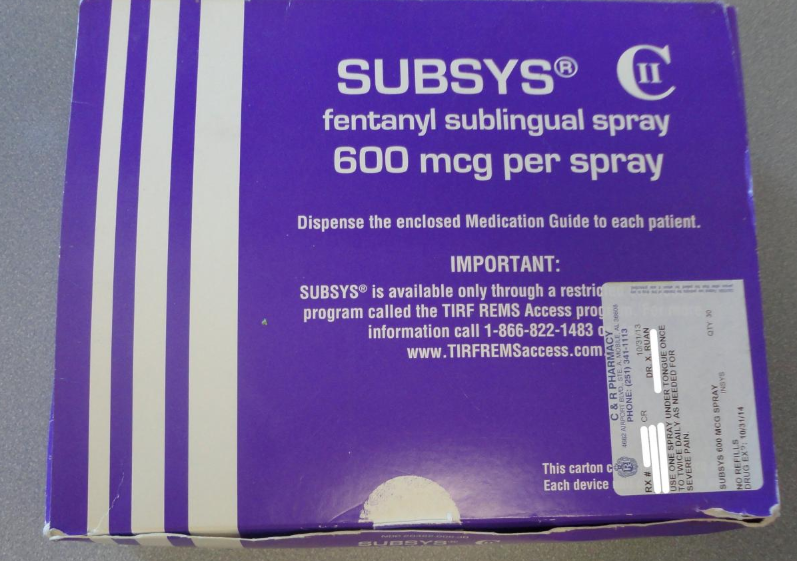 A box of the Fentanyl-based drug Subsys, made by Insys Therapeutics Inc, is seen in an undated photograph provided by the US Attorney's Office for the Southern District of Alabama. (Photo: Reuters)

Minnesota on Wednesday became the latest state to sue Insys Therapeutics Inc, accusing the drugmaker of illegally marketing a powerful fentanyl-based pain medicine intended for cancer patients for other uses and improperly paying doctors to prescribe it.

The lawsuit, filed by Minnesota Attorney General Lori Swanson amidst a nationwide epidemic of deaths caused by opioid painkillers like fentanyl, added to the legal woes of Insys, whose former top executives have been caught up in a federal criminal investigation involving its opioid product Subsys.

The US Food and Drug Administration in 2012 approved Subsys for use only in managing pain in cancer patients. Minnesota’s lawsuit, filed in Hennepin County District Court, accused Insys of encouraging doctors to prescribe Subsys to people with other medical conditions and at unapproved doses.

The suit also alleged that Insys improperly paid two doctors who became the top Subsys prescribers in Minnesota more than $43,000 in “speaker fees.” Subsys is an under-the-tongue spray that contains fentanyl, an opioid 100 times stronger than morphine.

The Minnesota Board of Pharmacy also brought an administrative case seeking civil penalties.

Insys did not respond to a request for comment.

A wave of lawsuits by state attorneys general have sought to hold drugmakers responsible for the opioid epidemic. Opioids were involved in more than 42,000 overdose deaths nationwide in 2016, according to the US Centers for Disease Control and Prevention.

Earlier this month, the Justice Department announced it had joined five whistleblower lawsuits accusing Insys of paying kickbacks to doctors to prescribe Subsys.

In October, federal prosecutors in Boston announced the arrest of billionaire founder John Kapoor on charges he participated in a scheme to bribe doctors to prescribe Subsys and to defraud insurers into paying for it.

Kapoor, Babich and five other former executives and managers in the case have pleaded not guilty. Insys has said it is in settlement talks with the Justice Department and may need to pay at least $150 million to resolve the probe.