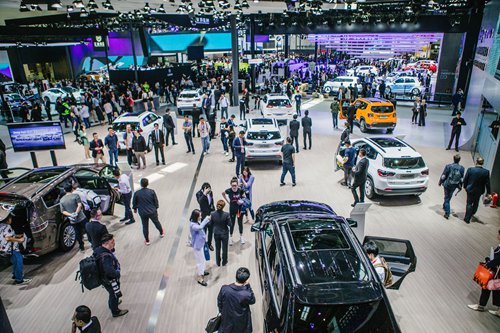 A view of Auto China 2018 in Beijing (Photos: GLobal Times)

To take the pulse of the trends in the Chinese auto industry and that of the wider world, Auto China 2018, offers many hints. 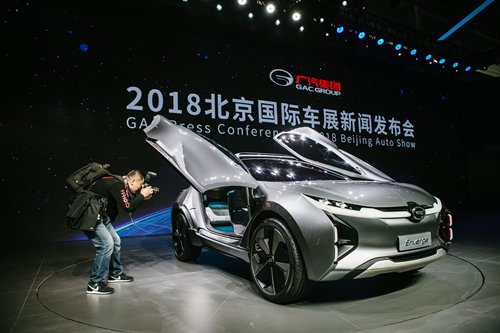 At the biennial event, one of the largest vehicle shows in the nation, which officially kicked off in Beijing on Friday, new technology trends, market transitions and development for domestic and foreign carmakers are on display, along with hundreds of vehicles.

In the massive Chinese auto market with a young consumer base that is keen to adopt the newest technologies, foreign and domestic carmakers are rushing in with their latest advances in areas such as electrification, connectivity and autonomous driving.

But the biggest challenge for these futuristic technologies is that reality, at least for the moment, has failed keep pace, according to some experts.

Also, while Chinese carmakers are stepping up their globalization efforts, foreign car companies are looking to further expand their localization strategies.

As expected, technologies in electrification, connectivity and autonomous driving took center stage at Auto China 2018, with executives of most of the producers talking up these terms at every opportunity. The booths were filled with flashy car models that companies claimed boast all these features.

While Chinese brands accounted for the vast majority of the NEVs at 124, foreign carmakers also increased their presence.

British carmaker Jaguar Land Rover brought its first electric car model - the I-Pace - to the show, saying the company would further continue its electrification process, aiming to have a fully electric entire fleet by 2020.

"When you look at the Chinese market at the moment, a lot of trends are actually happening here faster. Like electrification, it's fastest here in China," Frank Wittemann, president of Jaguar Land Rover China, said in an interview on Wednesday.

Aiming to attract young Chinese drivers who want their cars to be both stylish and smart, German carmaker Mercedes-Benz revealed a new A-class sedan that will have the company's newest in-car assistant system named MBUX, which can take voice commands.

Autonomous driving was another hot topic at the event.

"We have built a full layout for our autonomous driving car development with a 500-person research team," said Wang Qiujing, president of GAC Automotive Engineering Institute, under the GAC Group.

He noted that GAC will roll out its Level 3 autonomous driving technology by the first half of 2020.

Level 3 cars are capable of taking full control when certain conditions are met.

However, there are many challenges for the carmakers to put electrification and autonomous driving into practice, according to Doug Betts, senior vice president of global automotive operations at JD Power.

Betts told the Global Times in an interview on Tuesday that carmakers must figure out ways to cut the cost of autonomous driving cars and make electric vehicles easier to charge and able to run further.

"Ultimately a customer buys a vehicle based on economic valuation… Price is important and also how this car would fit in their lives," Betts said.

While traditional carmakers still dominated Auto China 2018, newcomers also put on a great show on Wednesday, taking up a lot of space with futuristic car models.

Dozens of start-ups such as Nio and Yudo Auto made their first appearances at Auto China 2018.

Yudo Auto introduced its π7 model, a full electric sport utility vehicle that features Level 3 autonomous driving and can run as far as 550 kilometers per charge, according to a press release the company shared with the Global Times on Wednesday.

Nio also brought nine models to the show, including "the fastest electric car, the EP 9" and a special version of the concept car EVE, the company said in a statement. Nio's six-seat model ES 8 also made its global debut at the event.

"It's time [for new car start-ups] to turn in their paper, or they would have a hard time raising fund and couldn't continue," Gong Min, China auto analyst at UBS Investment Research, said in an interview Thursday, noting that at the auto show, some start-ups attracted more eyes than some traditional ones.

Traditional carmakers have long argued that the newcomers won't pose too much competition for their businesses, but Chen Xuefeng, executive vice president at Chery Jaguar Land Rover, said there is much to learn from the technology companies.

"The Chinese market is constantly changing… in adopting to these changes, [traditional car companies] can certainly learn from these technology companies," Chen said.

Domestic brands such as Chery Automobile Co and GAC are trying not only to sell more cars in overseas markets but also to build R&D centers overseas.

Yu Jun, general manager for GAC Motor, said in an interview on Wednesday that the company is trying to make its GAC Trumpchi "a world-class brand and global company." GAC is in talks with US dealers to offer the company's Trumpchi car in that market, and it has set up a design center and R&D center in the US.

Chery, which has been the largest exporter of cars in China for the past 15 years, is in talks with European dealers to enter that market, Pan Yanlong, vice president of Chery, told reporters on Wednesday.

At the same time, many foreign companies announced plans to expand their presence in China, including Germany's Volkswagen Group and Jaguar Land Rover.

Volkswagen CEO Herbert Diess said on Tuesday that the group would invest 15 billion euros ($18.26 billion) in the Chinese market by 2022.

Wittemann said on Wednesday that given the Chinese market's leading position in trends such as electrification and connectivity, "we are creating cooperation here in China in order to develop and to learn also for the rest of our business globally."