Mnuchin says direct deposits out next week for virus aid 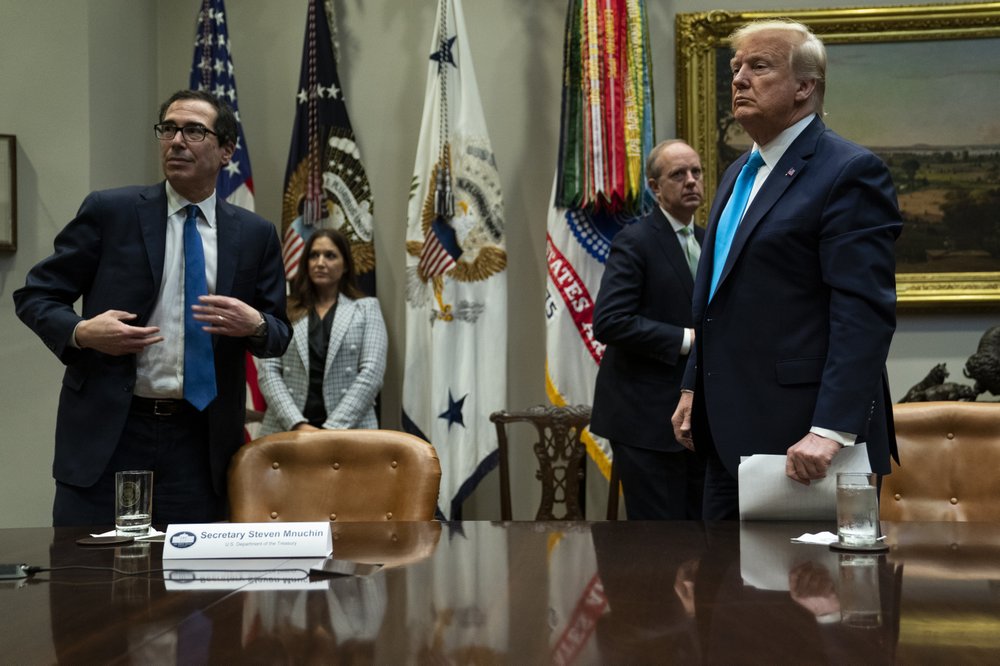 US Treasury Secretary Steven Mnuchin and President Donald Trump listen to a question during a conference call with banks on efforts to help small businesses during the coronavirus pandemic, at the White House, Tuesday, April 7, 2020, in Washington. (Photo: AP)

US Treasury Secretary Steven Mnuchin is telling House Democrats that direct deposits to Americans will begin next week under the coronavirus aid package.

Mnuchin is also telling the lawmakers that $98 billion has been approved for small business retention under a program the Trump administration wants Congress to bolster with another $250 billion in a vote expected Thursday.

The comments were made during a conference call with lawmakers briefed by Mnuchin, Vice President Mike Pence and the administration’s coronavirus task force, according to a person unauthorized to discuss the private call and granted anonymity.

The question now is whether and how quickly Congress and the White House can agree to it.

Pence was convening private conference calls Wednesday with House Republicans and Democrats, in separate sessions with Mnuchin administration’s coronavirus task force, as all sides appear to agree that more aid is needed.

Mnuchin’s assessment to the Democrats appears to address head-on concerns that the small business aid was riddled with problems and not getting into the hands of those who need it most.

He told them that the loans have been approved so far by 3,600 lenders. It was not clear, however, how much of that money was now actually out the door.

Lawmakers have raised concerns that the $1,200 direct payments to Americans could be delayed for months for those who do not have direct deposit through Treasury.

In the morning call with Republicans, Pence and the GOP leaders made a push for the small business Paycheck Protection Program and ensuring it receives all necessary additional funds, according to a Republican aide unauthorized to discuss the call and granted anonymity.

The GOP leaders were in agreement about quickly approving more funding for the program, the aide said.

“We hope our Republican colleagues will support this ‘Small Business Plus’ proposal tomorrow in the Senate,” he said.

The pandemic crisis is ransacking communities large and small, and Washington is poised to go beyond the $2.2 trillion package approved just two weeks ago. Similar calls with senators are expected to follow.

Despite the urgency of action, Congress appears headed for a showdown ahead of a vote Thursday.

Senate Majority Leader Mitch McConnell’s decision to rush Trump’s request for small business aid to a vote, with just 48 hours notice and without input from Democrats, threatened a fragile alliance for bipartisan action.

House Speaker Nancy Pelosi and Schumer swiftly outlined their own priorities in a Wednesday statement.

“The heartbreaking acceleration of the coronavirus crisis demands bold, urgent and ongoing action from Congress to protect Americans’ lives and livelihoods,” the leaders said in a joint statement. “The American people need to know that their government is there for them in their time of great need.”

The Democrats say they support the $250 billion in assistance to small businesses, but want $125 billion of that channeled through community-based financial institutions that serve farmers, families, women, minorities and veterans.

They’re also calling for an additional $100 billion for hospitals and community health centers to provide testing supplies and protective equipment like masks and gowns. They are seeking another $150 billion for state and local governments to manage the coronavirus crisis

They also want a 15 percent increase to the maximum Supplemental Nutrition Assistance Program food stamp benefits. The joint request reflected input from committee chairs and a broader swath of Democrats, with lawmakers representing districts with large minority populations being particularly concerned about whether the benefits of the small business subsidies are reaching their communities.

Republicans swiftly countered that Democrats were blocking fast action on the small business aid. Many of the Democratic requests revisited behind-the-scenes battles from the round of talks that produce the CARES Act two weeks ago.

On the call with Pence, Republicans also expressed concerns the small business assistance would be held up by the Democrats’ push for additional aid, said another Republican unauthorized to discuss the call and granted anonymity.

Mnuchin requested an additional $250 billion for a just-launched small businesses payroll program, which has been swamped with applications.

Part of the sweeping $2.2 trillion package that became law just two weeks ago, the $350 billion Paycheck Protection Program has been flooded as businesses rush to apply for up to $10 million in forgivable loans to keep paychecks flowing amid the stay-home shutdown.

With Congress all but shuttered amid the virus outbreak, passage of any measure will require bipartisan cooperation.

The House and Senate could deploy procedures that would allow a simple voice vote, without a roll call, or leaders could try to approve the package with unanimous consent.

Consent, though, seems unlikely, as Democrats push for add-ons and fiscal hawks criticize the cost. Rep. Thomas Massie, R-Ky., objected to the earlier package, forcing lawmakers to return to Washington for a vote.

One leading Democrat, Sen. Elizabeth Warren of Massachusetts, has also raised alarms about equity reforms that she said need to be made swiftly amid the rocky rollout of the small business program.

Millions of small business owners “have been put through hell over the past two weeks as they scrambled to try to get access to the money they desperately need,” Warren tweeted.

Minority-owned businesses and others are facing setbacks in applying for the aid, Democrats said.

“Congress also needs to dramatically simplify PPP so it actually works,” Warren tweeted. “Ensure that banks provide equal access to all borrowers — and do it NOW.”