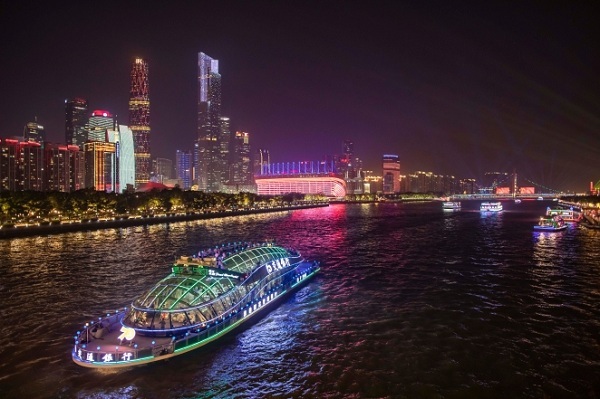 In South China's Guangdong province, one of the country's major economic powerhouses, high-tech and new-industry sectors are powering economic growth, along with the upgrade of traditional manufacturing.

Zhou Zhen, founder of Guangzhou Hexin Instrument Co Ltd ushered in the new year with a hectic schedule. The entrepreneur attended one meeting after another to lay out the 2020 development plan for his company, which is emerging as a leader in the Chinese industry of mass spectrometry, used in microbial detection, rapid detection of pesticide residues and pharmacy.

Guangdong's strategic new industries increased by 7.5 percent year on year in added value in the first 11 months of 2019, according to official estimates. In breakdown, the computer, communication and electronic equipment manufacturing grew by 7 percent, and the electrical machinery and equipment manufacturing reported an 8.5-percent growth.

Innovation is instrumental as China strives for modernization, and people are already implementing the innovative spirit.

In Chengdu, capital of southwestern Sichuan province that is famous for hotpot dishes, restaurant owners are trying new ways to bring their special cuisine culture to the next level.

In Tianfu Hot-pot Town, hotpot tables stand in gardens, float in the lake and even sit on trees. Each day, crowds of local foodies boil hotpot ingredients in a spicy soup as music blasts and lights shine. This unique way of consuming hotpot is so different that it has made the town a big hit on Chinese short-video sharing app Douyin, or TikTok.

"In the past, the area was deserted: It was dirty and messy," said Fu Wei, general manager of a local hot-pot restaurant. "We later transformed the water and planted a lot of trees here."

Fu invited many farmers and young people to work in the innovative town, which now guarantees an annual income of up to 50,000 yuan for each of them. The restaurant receives up to 3,000 diners a day, with sales revenue reaching 300,000 yuan on a daily basis.

"They truly innovate the industry," said local official Yang Yang. "This interesting way of dining also helps impoverished farmers, who either work there or provide agricultural products to the town."

While development is important, China has abandoned the growth-at-all-costs model and switched to green, sustainable and high-quality growth.

In the January-September period last year, the NEV sales in China rose 20.8 percent year on year to 872,000 units, according to the China Association of Automobile Manufacturers.

The boom resulted in a strong demand for lithium-ion batteries. Contemporary Amperex Technology Co Ltd (CATL) posted a 45.7 percent net profit growth during the same period. The company is China's largest automotive lithium-ion battery maker, and its headquarters is in the city of Ningde, Eastern China's Fujian province.

Over the past year, the company declared a series of key technological breakthroughs. For example, the self-heating technology enables batteries to warm up from 20 degrees Celcius below zero to 10 C in 15 minutes.

While China's domestic enterprises are on the fast track, the nation has also been welcoming foreign-invested companies to contribute to its modernization drive.

More than 600 km away from Ningde, authorities have released a new plan outlining a blueprint for high-quality growth in the city of Suzhou, eastern Jiangsu province.

According to the plan, Suzhou will be home to 14,000 high-tech firms by the end of 2022, including 3,000 foreign-invested ones. The dynamic city has 17,000 foreign-funded companies, with its actual use of foreign investment totalling 132 billion dollars.

Last week, US electric carmaker Tesla officially delivered the first batch of 10 made-in-China Model 3 sedans to the public in Shanghai, one year after the company broke ground on its first overseas plant.