China's ongoing trend of agricultural upgrades is creating diversified jobs in rural areas including drone operators and livestream broadcasters, and their participation is not only drastically improving production efficiency but also boosting agricultural product sales. 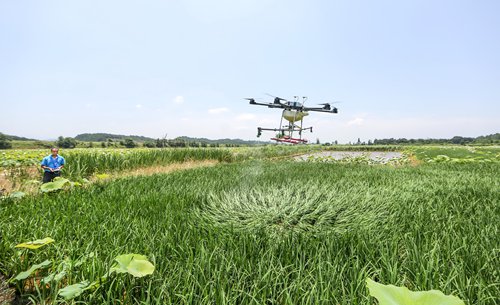 Wu, after substantial training and practice, now operates three farming drones to spray pesticides over a total of 1,300 mu (86.7 hectares) of farmland that is owned by the cooperative.

"A drone is able to cover 200 mu to 300 mu of land every day, which means [the workload of the cooperative's 1,300 mu of farmland] can be completed by three drones within just two days," Wu explained.

That compares with the past situation, when five rural workers collectively could only spray pesticides on 100 mu of farmland a day, according to the cooperative's president Li Xiaojun.

"Sometimes workers are also exposed to risk of sunstroke and intoxication, and we also have a hard time recruiting farmers in busy seasons," Li was quoted as saying in a report by the Xinhua News Agency, noting that the new jobs of drone operators, therefore, could help save time and labor costs.

Meanwhile, drones have gradually been gaining market recognition. And Wu noted that they are now "in great demand." 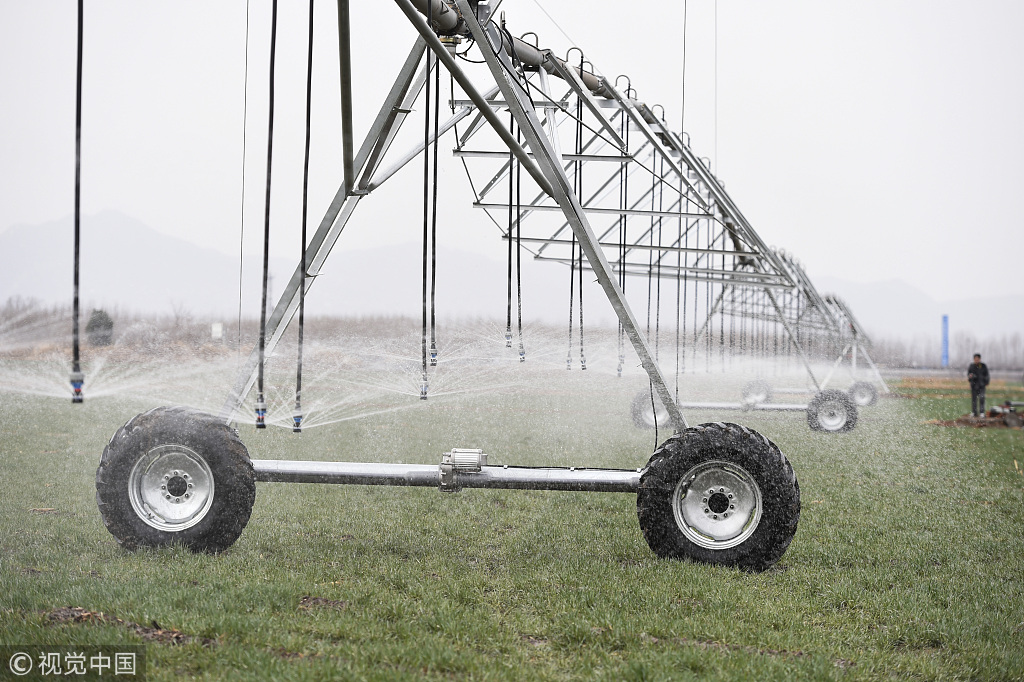 In addition to drones, the application of smart technologies is also reshaping the way agricultural products are being cultivated across China.

In a planting base in Gao'ao, Jiangxi, cameras and wireless sensor systems have been installed above and underneath every five to 10 mu of farmland, which can collect and monitor in-time crop data.

The data then serves as a basis for big data analysts to help them achieve precision fertilization and irrigation so as to improve farming efficiency.

Xiao Wen, president of Jiangxi Bafulo Eco-agricultural Science and Technology Co and manager of the planting base, said that the sensors boast the advantage of ultra-low power consumption, with a battery life as long as 20 years.

"In traditional agriculture, farmers live at the mercy of [natural disasters and erratic weather], but in modern agriculture, it's all about using technologies to maintain precision management in farming," said the 51-year-old manager.

Experts also noted that after agricultural products go into the market, further big data is collected to guarantee the establishment of a sound product safety traceability system.

Such data is collected when customers actually purchase the products in supermarkets. For example, consumers can scan the QR code attached to vegetable and fruit packaging to learn about the growing process of the plants as monitored by the cameras. This is also an efficient way to lift sales.

In the high-end market, consumers can also view information about the climate conditions and surrounding environments of products when scanning the QR code, for example the average duration of sun exposure of a vegetable, Lei Yingguo, a rice farmer in Jiangxi's Leifang, was quoted as saying in the Xinhua report.

And because of such detailed information, Lei is able to sell his rice at 37.6 yuan ($5.8) per kilogram, higher than the market average of 10 yuan per kilogram, according to Lei. 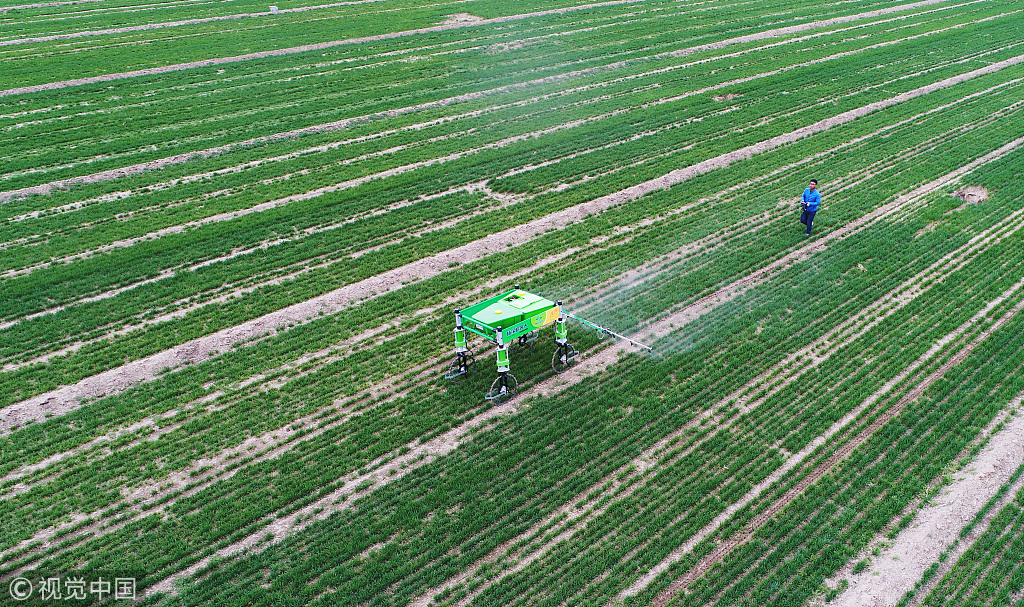 With regard to market sales, poor rural workers have also come up with creative marketing strategies to attract consumers and promote product sales.

"Dear friends, please check out and learn how our farmers are making delicious local dried bamboo shoots here - I'm drooling," Jiang Jinlin said as he began livestreaming via a mobile application in Jiangxi's Hengfeng county over the weekend.

Thanks to his accent skits and humorous impersonations, his livestreaming attracts thousands of fans in just the first few minutes of every broadcast.

The 39-year-old farmer is seen as an "internet celebrity" in the agricultural sector and promoting local crops to his fans has become a daily routine.

And through his livestreaming, the agricultural products of 200 households in 500 nearby villages have been sold elsewhere in China.

More and more agricultural internet celebrities like Jiang are now budding across China, opening more sales channels for agricultural products while reflecting a shift in the mindsets of farmers toward the rising internet economy, the Xinhua report said. 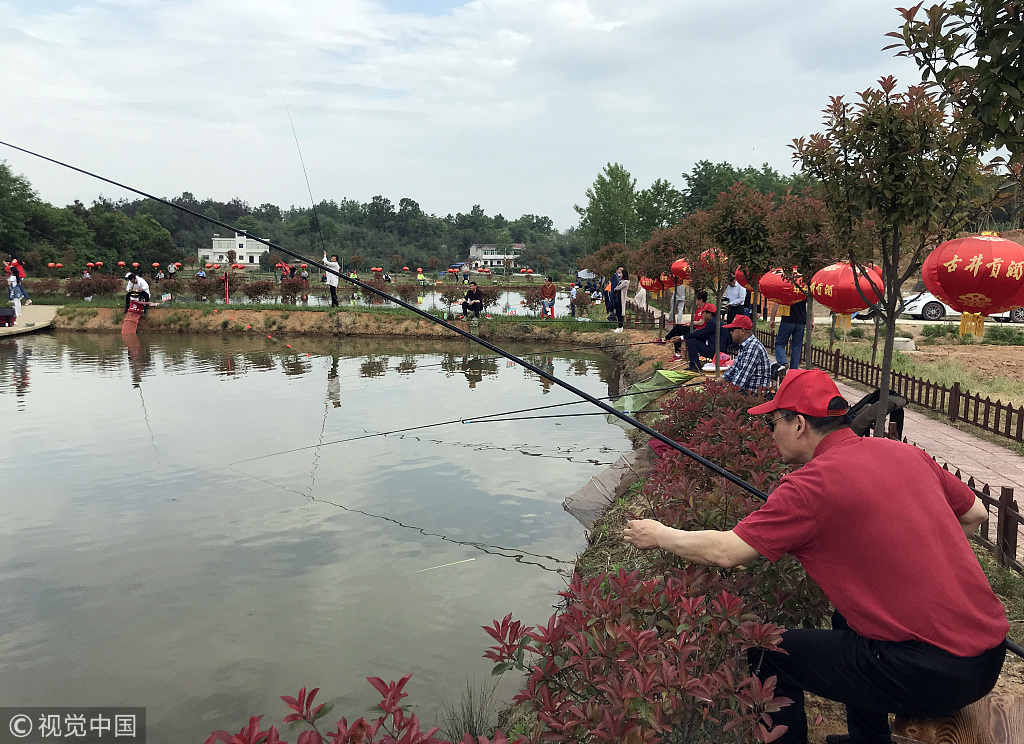 At the same time, village tourism in rural Jiangxi is also becoming a new source of revenue, as more residents in villages change their professions.

Wan'an county in Jiangxi is home to dozens of farmer painters, with more expected to join the industry in the coming years. In 2013, local authorities invested more than 70 million yuan so art teachers could go to villages and train local residents. That money also went toward the building of relevant facilities.

Xiao Qun, a local farmer painter whose paintings feature local landscapes and capture the scenes of harvesting, made 100,000 yuan by selling paintings in 2017, according to the Xinhua report.

Similar to Wan'an, the talents of farmers in Jiangxi's Genling village are attracting tourists from major cities and helping to generate bigger incomes, thanks to the village's 500-year-old traditional paintings that depict autumn harvesting. Those paintings are created when farmers use rice as the underpainting and colorful agricultural products as the pigment.

"We now can make 2,000 yuan a month, much more than our incomes from farming, and it's also easier," said a local villager named Cao Xiuyun.