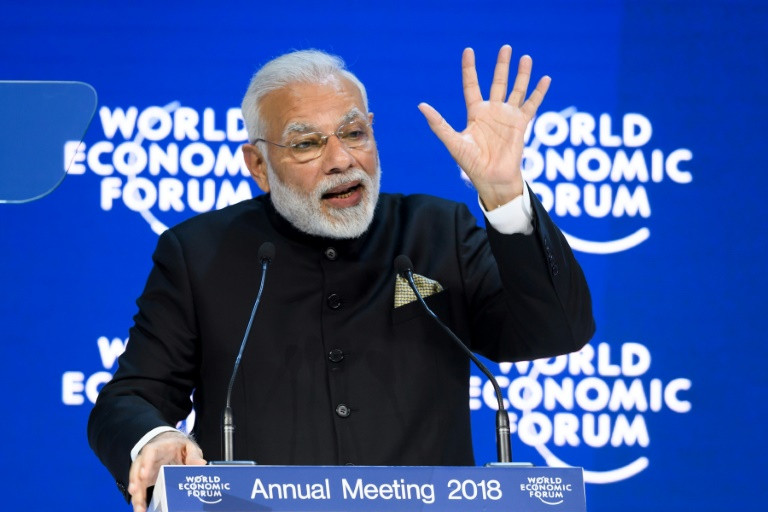 Indian Prime Minister Narendra Modi acknowledged Tuesday that globalisation is "losing its lustre" but warned that new trade walls are not the answer, opening a week of Davos meetings that will climax with a speech by the loudly protectionist US President Donald Trump.

After spectacular snowfall that stranded some high-flying delegates on their way to the Swiss ski resort, the World Economic Forum started in earnest basking in robust global growth but facing warnings that the world's have-nots are missing out more than ever.

Modi told the forum that India should serve as an example as it opens up to foreign investment, in a speech that delved into Hindu scripture and echoed an anti-protectionist clarion call issued in Davos a year ago by Chinese President Xi Jinping, as Trump prepared to take office.

"It feels like the opposite of globalisation is happening. The negative impact of this kind of mindset and the wrong priorities cannot be considered less dangerous than climate change or terrorism," Modi said, in the first appearance at Davos by an Indian prime minister since 1997.

"In fact everyone is talking about an interconnected world but we will have to accept the fact that globalisation is slowly losing its lustre," he said.

"The solution to this worrisome situation is not isolationism. Its solution is understanding and accepting change and formulating agile and flexible policies for these changing times."

Trump won the 2016 election on a populist platform that demonised the globalist Davos elite.

While some delegates are relieved that full-blown trade wars with the likes of China have not erupted so far, the president served a fresh reminder that his rhetoric has teeth.

In advance of his Davos speech on Friday, Trump approved steep tariffs on imports of solar panels and washing machines to protect US producers, triggering an outcry in China and South Korea.

However in Davos, Modi channelled the founding father of independent India, Mohandas Gandhi, who he said had argued that "I don't want the walls and windows of my house to be closed from all directions.

"I want that the winds of cultures of all countries enter my house with aplomb and go out also. However, I will not accept my feet to be uprooted by these winds."

That was redolent of Xi last year, who wowed the Davos crowd by warning that pursuing protectionism "is like locking oneself in a dark room".

"Wind and rain may be kept outside, but so is light and air," Xi said.

"With complete self-confidence and fearlessness, India is welcoming this wave from all over the world," he said.

Despite its impressive growth under the Modi government, India displays some of the world's worst extremes of the rich-poor divide, an issue exercising the 70-odd leaders and thousands of delegates engaging in the week of debate high in the Swiss Alps.

Undermining rosy data on the world economy are warnings that elite fora such as Davos must start finding solutions for everyone else down the income ladder, as the "one percent" amass untold riches a decade since a major financial crisis erupted.

- Inequality 'out of control' -

International Monetary Fund chief Christine Lagarde said despite the world economy starting to fire on all cylinders, "there are still too many people left out from the recovery and acceleration of growth".

In a report unveiled in Davos, British aid group Oxfam said the world's richest one percent raked in 82 percent of the wealth created last year while the poorest half of the population received none.

"Our report shows that inequality is out of control globally. It shows that our broken economies are rewarding wealth and not hard work, and those are the decisions of our political and business leaders," Oxfam executive director Winnie Byanyima told AFP.

"And I'm here to make them uncomfortable," she said, invoking the Davos forum's official theme this year: "Creating a shared future in a fractured world."

"Oxfam is here to tell them that that wealth, that kind of world where people at the bottom are trapped there, and the few at the top are rewarded, is a dangerous world, it's a fractured world," Byanyima said.