BUSINESS MOFCOM: China-US trade issues can only be resolved through 'equal' talks

MOFCOM: China-US trade issues can only be resolved through 'equal' talks

The trade issues between China and the US can only be resolved through "equal" negotiations, Chinese commerce ministry spokesman Gao Feng said. 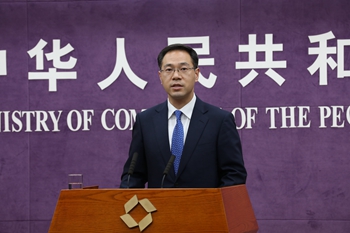 He also told a regular briefing on Thursday that the two sides will keep in contact regarding future arrangements for talks.

He reiterated that China will firmly conduct the reform and opening up of its economy at its own pace regardless of the pressures exerted by the US, as well as uphold the multilateral trading system and free trade.

During six days of hearings held in Washington last week, more than 90 percent of over 300 representatives from the US and China voiced opposition to the Trump Administration's tariff plan on China, Gao said.

And China hopes the US will face up to the voices of the Chinese and American industries and consumers, the long-term industrial chain cooperation between the two countries, as well as the fundamental interests of the people of both countries, he added.