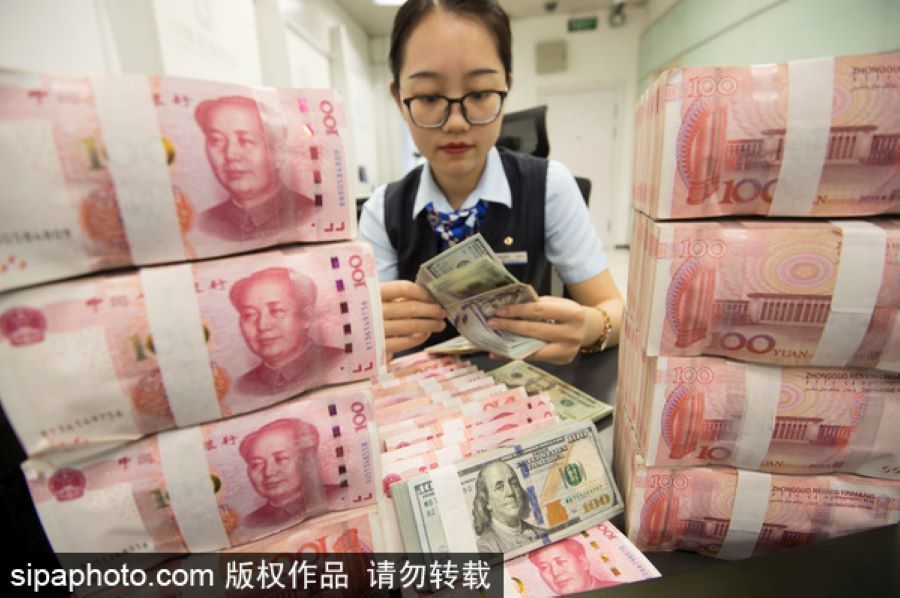 A cashier counts RMB and US dollar notes in a bank in Nantong, Jiangsu province, on Aug 6, 2019. (Photo: Sipa)

China's monetary authorities are planning a more significant role for the renminbi, encouraging the free cross-border flow of capital under the nation's financial opening plan, supported by favorable domestic monetary conditions, according to analysts.

Policymakers may add a target of increasing the yuan's share in global trade and reserves in the development plan for the next five years, to reduce the financial sector's reliance on the US dollar, they said after a speech by a senior central bank official on Sunday.

Chen Yulu, vice-governor of the People's Bank of China, said "the renminbi will take greater international responsibility in the future".

He said that China is taking action in the international financial governance system to promote the renminbi as a widely accepted international reserve currency.

China may accelerate renminbi reform and capital-account liberalization from 2021 onward, after discussion of the 14th Five-Year Plan (2021-25) in October, said Stephen Chiu, a foreign exchange and rates strategist at Bloomberg Intelligence.

"China may want to utilize this time window, as the US dollar's weakness may persist and as the next Special Drawing Rights review draws near."

The US Federal Reserve revised its monetary policy framework recently, tolerating inflation at above 2 percent, which sparked speculation among economists that the US will maintain a low interest rate and monetary easing in the longer term. That projection weakened the greenback last week and pushed the renminbi to its strongest level against the dollar in more than a year.

The central bank's vice-governor warned that China's monetary policy should prevent excessive money issuance that may lead to several "bad results". In the meantime, it should remain flexible, taking "countercyclical" measures to support economic development.

Chen reiterated that the "fundamental mission" of a modern central bank is to sustain currency and financial stability, providing a long-term stable monetary environment to the real economy and the financial service industry.

China's central bank has maintained a relatively higher interest rate level compared with its Western peers. As a result, the yuan's interest-rate premium over the yield on the dollar expanded, which also helped to boost foreign investors' demand for renminbi-denominated financial assets to seek higher returns, said analysts.

By the end of July, foreign institutions and individuals held renminbi-denominated assets of about 7.74 trillion yuan ($1.13 trillion), up 37 percent year-on-year, according to data from China's central bank.

A stronger currency will improve the attractiveness of renminbi-denominated assets and reduce investors' holdings in overseas markets. All these factors will stabilize and boost China's capital market, said Gao Shanwen, chief economist at Essence Securities.

"The flexibility of the RMB exchange rate has also improved and remained resilient, which has been an automatic stabilizer in adjusting the international balance of payments," said Zheng Wei, deputy head of the State Administration of Foreign Exchange.

The country's financial regulators introduced more measures on Sunday to accelerate the opening of the financial sector.

Chen, the central bank's vice-governor, said that items on the "negative list" for managing the market access of cross-border financial services have been all removed, which means more foreign institutions will enter China's financial market.