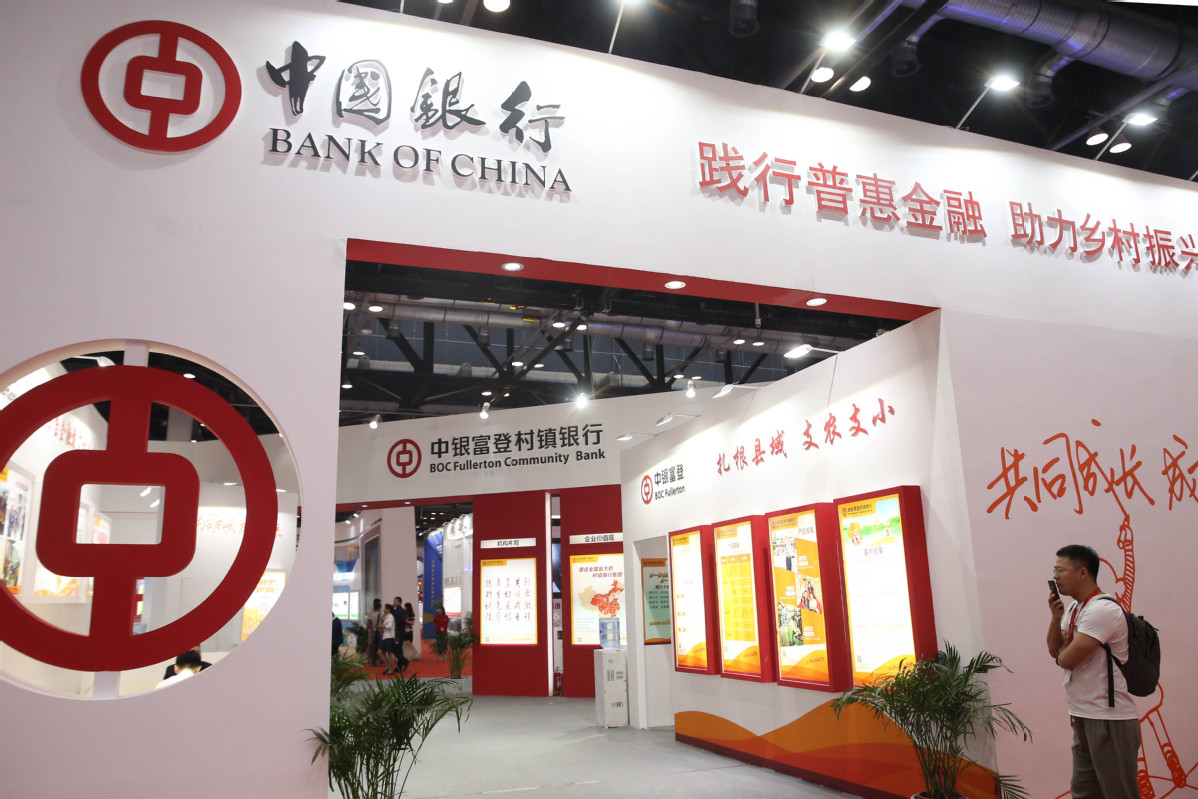 The booth of Bank of China during a financial expo in Beijing. (Photo: China Daily)

A declining loan-to-deposit ratio for Chinese banks in the first quarter of 2019 indicated that the liquidity of the banking sector is generally adequate, said an expert of Moody's Investors Service.

"After rising for two years, the loan-to-deposit ratio dropped in the first quarter of this year mainly because banks' deposits grew at a faster pace than loans during the same period," said Nicholas Zhu, vice-president and senior credit officer at Moody's, one of the "Big Three" global credit ratings agencies.

"Generally speaking, the liquidity of the Chinese banking system is fairly adequate," said Zhu during an interview with China Daily at the Moody's and CCXI 2019 Summit in Beijing on Tuesday.

Commercial banks and nonbanks are now paying much greater attention to the risks in the interbank business due to concerns over liquidity risk at small and medium-sized banks.

Starting on May 24, China's banking and insurance regulator took over Baoshang Bank Co Ltd for one year, as the Inner Mongolia-based, joint-stock commercial lender was exposed to serious credit risk.

"Previously, banks and nonbanks did not fully implement counterparty risk management in detail. With a sudden awareness of its importance, various financial institutions are all reviewing their risk appetite and the internal process of managing counterparty risks," said Zhu.

He noted that although it is good to raise awareness of counterparty risk management in the long run, the market is still concerned about whether or not it will cause a rapid shrinkage of interbank financing, investment and lending in the short term for the reason that a rapid and forced shrinking of banks' balance sheets may trigger systemic risk or have an unexpected economic impact.

"Attaching great importance to this issue, the People's Bank of China, the central bank, and regulatory authorities have put the maintenance of financial stability at the top of their list of priorities, which also include reducing moral hazards, cracking down on shadow banking activities, and abstaining from providing implicit guarantees and making rigid repayments. The central bank and regulators have a strong willingness and the capability to realize the goal of maintaining financial stability," he said.

Recently, the State Council's Financial Stability and Development Committee held a meeting during which large State-owned banks and smaller joint-stock commercial banks said they would maintain a stable volume of interbank business with other small and medium-sized banks, in an effort to maintain market order.

According to a news release issued by the People's Bank of China on June 9, the central bank will use various monetary policy instruments to maintain a reasonable and adequate level of financial market liquidity, in addition to providing targeted liquidity support for small and medium-sized banks.

The growth of banks relies heavily on the real economy, which refers to the part of the economy that produces goods and services. As regulators have made their intentions clear that small banks should operate at the local level, banks are facing challenges in managing sector concentration risk that is closely related to the local economy, said Zhu.

"Mergers and acquisitions of banks within a few provinces have already taken place and may occur later. The intra-provincial integration of banks will help them reduce sector concentration risk and realize cross-regional reallocation of financial resources," he said.

But it is unlikely there will be trans-provincial integration of banks, as local governments want to have a certain level of local affiliation of financial service providers and therefore cherish the opportunity of having a licensed bank that is headquartered within their jurisdiction, he added.