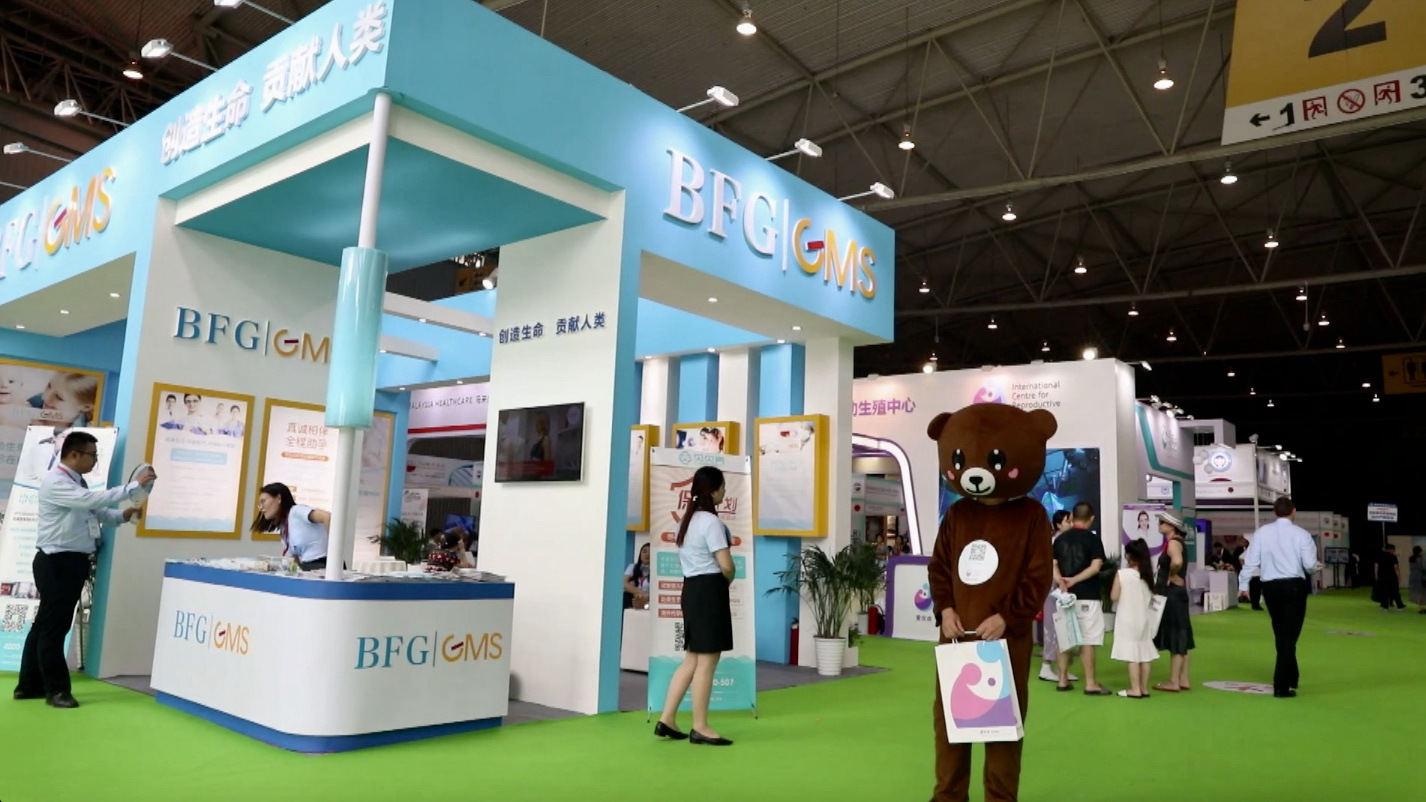 IVF clinics from different countries and regions set up booths to promote themselves during an expo held in southwestern Chinese city of Chengdu.  (Photo: CGTN)

Like most parents, Huang Jiang's happiest moment is when he stays with his daughter. One and a half years ago, the 34-year-old man from Beijing took in-vitro fertilization, or IVF treatment in Thailand.

“My wife was suffering from a kind of disease back then and the doctor suggested that resorting to IVF would be a lot better,” Huang told CGTN.

The couple first tried the widely-used technology in a Beijing hospital but failed.

“We were kind of surprised, as we thought the odds of success are big considering my wife's situation,” Huang said. “But the hospital was so crowded and I think the environment was not that good for women. Then we went to Thailand, where the technology is more mature, for another try.”

The couple is not alone in their experiences of going overseas for IVF treatment. Some southeastern Asian countries like Thailand and the US are now some of the most popular destinations for Chinese women attempting to conceive.

“The IVF market in Thailand has seen rapid growth. We predict the number of Chinese clients to increase by about 40 percent this year. As for our company, the business volume doubles every year,” Mai Liang with the Bangkok-based Thaiyue Healthcare told CGTN. He is responsible for the Chinese market.

Some other countries, such as Russia, are also trying to lure more clients with their own advantages.

“We're seeing more and more Chinese clients. I think they will outnumber those from other countries soon.  At the moment, we only have two interpreters for them, but we will have three more in a few months,” said Margarita Meshcheriyakova from the ALTRAVITA IVF Clinic in Moscow. She added that one of their advantages is that they can also provide surrogacy service.

Today, agencies for foreign IVF centers are springing up in Chinese cities to hunt for customers.

According to a report released by Qianzhan Industry Research Institute, Chinese people spent about 7.4 billion yuan (1.1 billion US dollars) in IVF treatment outside the country. It estimated the number could exceed nine billion yuan in 2017.

The rising infertility rate is considered a major reason behind the booming business. Data from the China Population Association put the number at 12.5 to 15 percent. The easing of the decades-long one-child policy, on the other hand, has greatly stimulated the demand.

According to Mai, their clients are mainly couples who want a second child but of a different gender or women in advanced maternal age. There are also some other groups, such as homosexuals.

In fact, the growing overseas market reflects the insufficiency of such fertility institutions back in China. Due to ethic concern, authorities have strict control of issuing licenses. There were a total of 432 centers acquiring IVF qualifications by the end of 2016, far from being enough.

Several of the other treatment seekers CGTN interviewed said they would rather pay a little more to enjoy more advanced technology and better services.

Seeing the huge potential, investors begin to pour in the Chinese market, which is sure to create more fierce competition in the years to come, especially when more and more local governments are encouraging people to expand their family size with preferential policies.

“I'm confident with our business growth in China, it can only be better,” said Mai.