BUSINESS More than 50 new exhibitors sign up for 3rd CIIE

More than 50 new exhibitors sign up for 3rd CIIE 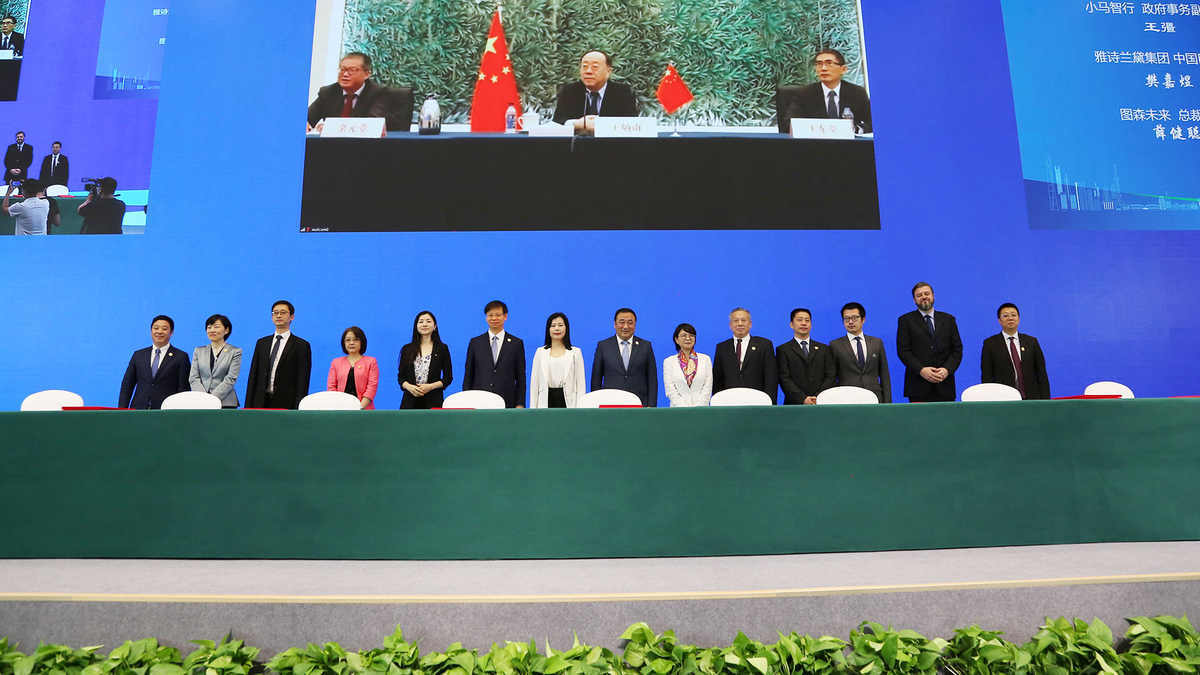 The third CIIE hosts a large-scale signing ceremony that takes place both online and offline on May 15 in Shanghai. (Photo: chinadaily.com.cn)

The third China International Import Expo (CIIE) has made strong inroads in attracting exhibitors, with more than 50 global companies signing up for the event during a ceremony that took place both offline and online on May 15.

The companies that confirmed their participation are mainly from the United States, Japan, Germany, France and Italy. They include renowned companies from the US such as General Electric, Pfizer and Estée Lauder.

Fast Retailing, the parent company of UNIQLO, also signed up for the CIIE for the first time, booking an exhibition area measuring 1,500 square meters.

According to the CIIE Bureau, more than 80 percent of the planned exhibition area has been booked by exhibitors.

"CIIE serves as the platform for international procurement, investment promotion, cultural exchange, and opening-up and cooperation," said Wang Bingnan, vice-minister of commerce and director of the CIIE Bureau, while addressing the ceremony. "Amid the COVID-19 pandemic, to successfully host the third CIIE shows China's crucial role and responsibility in restoring the global economy," he added.

The third CIIE will take place from Nov 5 to 10 at the National Exhibition and Convention Center (Shanghai). "The preparation work is going smoothly despite the pandemic. It is a significant moment that provides a great opportunity for the Chinese economy," said Wang.

Xu Kunlin, vice-mayor of Shanghai, said in his speech that Shanghai, as the host city of the CIIE, will make serving the event a top priority.

The third CIIE will feature a public health and epidemic prevention exhibition area in the Medical Equipment and Healthcare Products Exhibition Hall. Meanwhile, the Automobile Exhibition will showcase products related to smart transportation while the Trade in Services Exhibition will highlight the tech behind international trade. The Food and Agricultural Products and Consumer Goods sections will display the latest trends in lifestyle products.

Jide Zeitlin, Chairman and CEO of Tapestry, said that the Chinese market is still strong and important to overseas companies, and that it always provides inspiration and drives brands to innovate. Zeitlin added that the CIIE offers a great opportunity for foreign companies to further explore the Chinese market.

Tapestry, the parent company of a range of luxury fashion brands such as Coach, signed a long-term MOC (Memorandum of Cooperation) with the CIIE Bureau during the ceremony, promising that it will participate in the annual expo for the next three years.

Brian Ng, representative of the Hong Kong Trade Development Council, said that the CIIE is a very effective platform for companies to expand their businesses in the Chinese mainland market.

Hong Kong exhibitors will account for some 1,700-sq-m of exhibition space this year, an increase of 20 percent from last year.

Meanwhile, medical devices and health care company Abbott said that it will bring its latest products and services to the third CIIE. Tony Chan, vice president of Abbott Diagnostics Business in China, said that the CIIE builds a bridge among overseas exhibitors and Chinese business partners.

Jerrity Chen, head of G&O at Louis Dreyfus Company North Asia, said that the CIIE is a means for companies to demonstrate their loyalty to the Chinese market. This is the third time that Louis Dreyfus has signed up for the expo.

A number of purchase deals for this year's expo have been signed during the ceremony. Louis Dreyfus has inked a purchase deal worth $20 million with Shanghai Liangyou Group while Varian Medical Systems from the United States has sealed a deal with Shanghai Sixth People's Hospital East Campus.