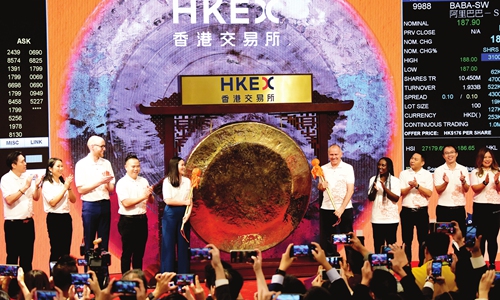 Chinese e-commerce giant Alibaba Group Holding Ltd. makes a strong debut on the main board of the Hong Kong stock exchange Tuesday with its share price rising 6.59 percent on the first trading day. Ten partners from around the world attend the listing ceremony. (Photo: Xinhua)

Chinese companies are abandoning pursuit of listings at the US stock market, with many shifting to bourses at the Chinese mainland and Hong Kong due to an excessively regulatory toughening targeting Chinese firms, according to market watchers.

Not all Chinese companies are going down that road. Kingsoft Cloud, the cloud storage unit of major computer software developer Kingsoft Group, is now seeking an IPO on the NASDAQ.

In its amended registration statement filed with the US Securities and Exchange Commission (SEC), Kingsoft Cloud - backed by Chinese smartphone vendor Xiaomi - revealed plans to sell 25 million American depositary shares, eyeing net proceeds of about US$392 million. Kingsoft Group has indicated an interest in buying up to US$25 million of the offering, and Xiaomi could purchase up to $50 million.

It's unclear why Kingsoft is opting to buck the trend, said an investment banking analyst with a Chinese joint-stock bank, requesting anonymity. Xiaomi said it had no comment on the IPO when reached by the Global Times on Wednesday.

Shifting to a Chinese bourse is becoming the norm for many US-listed Chinese companies. In a recent major move, Chinese regulators approved plans to reform the ChiNext market in Shenzhen and conduct trials of a registration-based IPO system on the startup board.

The China Securities Regulatory Commission announced that companies with special ownership structures that meet certain requirements would be allowed to float on the ChiNext board.  It means the variable interest entity (VIE) structure prevalent among Chinese internet companies, which are commonly listed in the US, will no longer serve as a barrier to being listed on the Shenzhen board.

A toughening regulatory stance on Chinese stocks in the wake of alleged financial fraud at Luckin Coffee is also believed to have dampened desire for a flotation in the US. SEC chair Jay Clayton issued a rare warning on Chinese company disclosures in late April.

Meanwhile, JD.com and NetEase, both listed in the US, have reportedly both filed for secondary listings at Hong Kong Stock Exchange.

JD.com declined to comment when reached by the Global Times on Wednesday. NetEase couldn't be immediately reached for comment.

"We do not comment on individual companies," a spokesperson for Hong Kong Exchanges and Clearing Ltd (HKEX) told the Global Times on Wednesday.

"Of course, HKEX would warmly welcome any listing, including secondary listings by US-listed Chinese firms," the spokesperson said.

Other than the Hong Kong market, both the ChiNext board and the STAR Market in Shanghai are expected to be the main venues for listings away from the US, according to the investment banking analyst.

Chinese mainland shares opened lower on Wednesday, the first trading day after the May Day holidays, but managed to shrug off global market turbulence to close higher on strength from tech stocks.

The tech-heavy ChiNext index closed up 1.97 percent, extending its year-to-date rally to 17.36 percent. H shares finished up 1.13 percent on Wednesday in Hong Kong, continuing a winning streak for the second straight day.