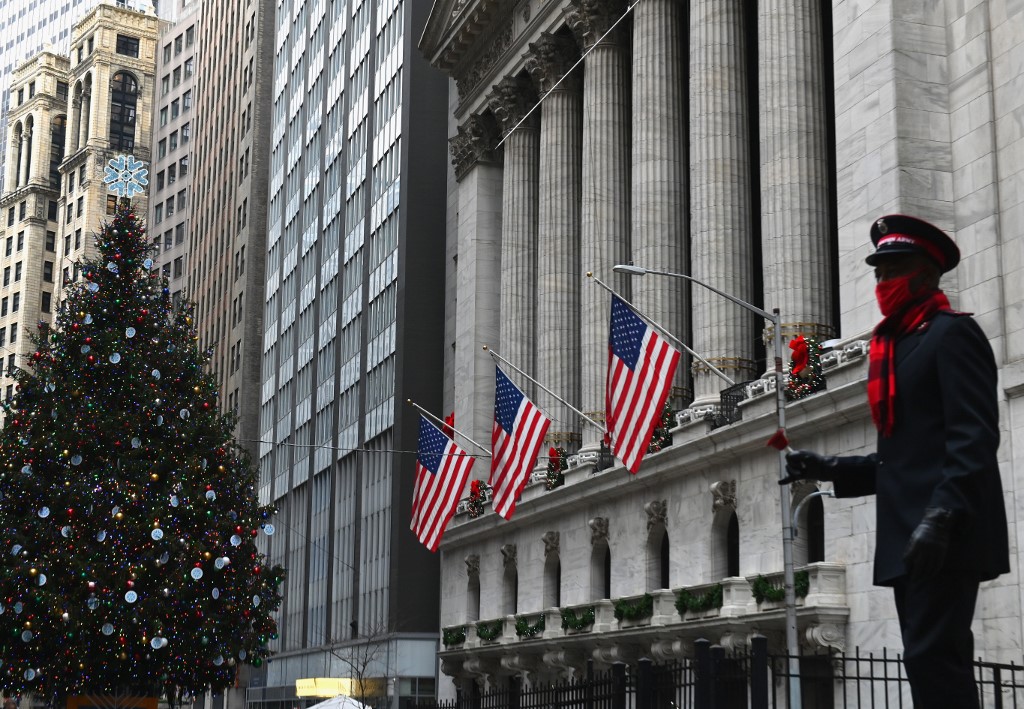 In this file photo taken on December 09, 2020, a Salvation Army volunteer dances in front of the New York Stock exchange (NYSE) at Wall Street in New York City. (Photo: AFP)

Asian markets mostly rose Tuesday following a record-breaking lead from Wall Street as investors cheered the passage of a huge US stimulus bill which has helped temper fears about surging coronavirus infections.

With President Donald Trump finally signing off on the $900 billion rescue package and a post-Brexit trade deal now agreed, the mood on trading floors was a little lighter heading into the new year.

News that more vaccines could be rolled out soon also provided a lift, even as governments around the world were forced to impose lockdowns and other strict, economically painful measures to contain surging Covid-19 cases.

"Where we are right now in the equity market is somewhat of a sweet spot," Michael Cuggino, at Permanent Portfolio Family of Funds, told Bloomberg TV. "We've got stimulus, likely more on the way.

"You've got great comps on earnings going into next year with respect to equities, and you have a pent-up demand situation as the economy both in the US and globally comes out of Covid."

Trump had held off signing the stimulus package for almost a week saying it did not provide enough cash to Americans, calling for handouts to be jacked up to $2,000 from the $600 offered in the initial bill.

Democrats agreed more was needed and on Monday the House of Representatives approved a motion to increase the payments, though it will likely meet resistance from Republicans in the Senate.

President-elect Joe Biden, asked by a reporter Monday if he favoured raising the payouts to $2,000, replied: "Yes."

All three main indexes on Wall Street ended at record highs, as did Germany's DAX, and most of Asia followed suit.

Tokyo led the way, soaring 2.7 percent to end at a 30-year high, while Wellington was up more than one percent. There were also healthy gains in Hong Kong, Sydney, Seoul, Mumbai and Singapore. However, Shanghai, Taipei, Jakarta and Bangkok all fell.

US futures were also in positive territory.

"The stipends will arrive quickly and are spent rapidly, providing the US economy with immediate retail sales spending bonanza boost. This splurge could be multiplied by three if the Senate agrees to rubber-stamp support for increased Covid cheques."