BUSINESS Most US firms confident in China outlook

Most US firms confident in China outlook

Despite an unprecedented downturn in relations between the world's top two economies during the COVID-19 pandemic, United States businesses are not leaving the Chinese market, where most are making profits and optimistic about future growth, the US-China Business Council said in its annual member survey on Tuesday. 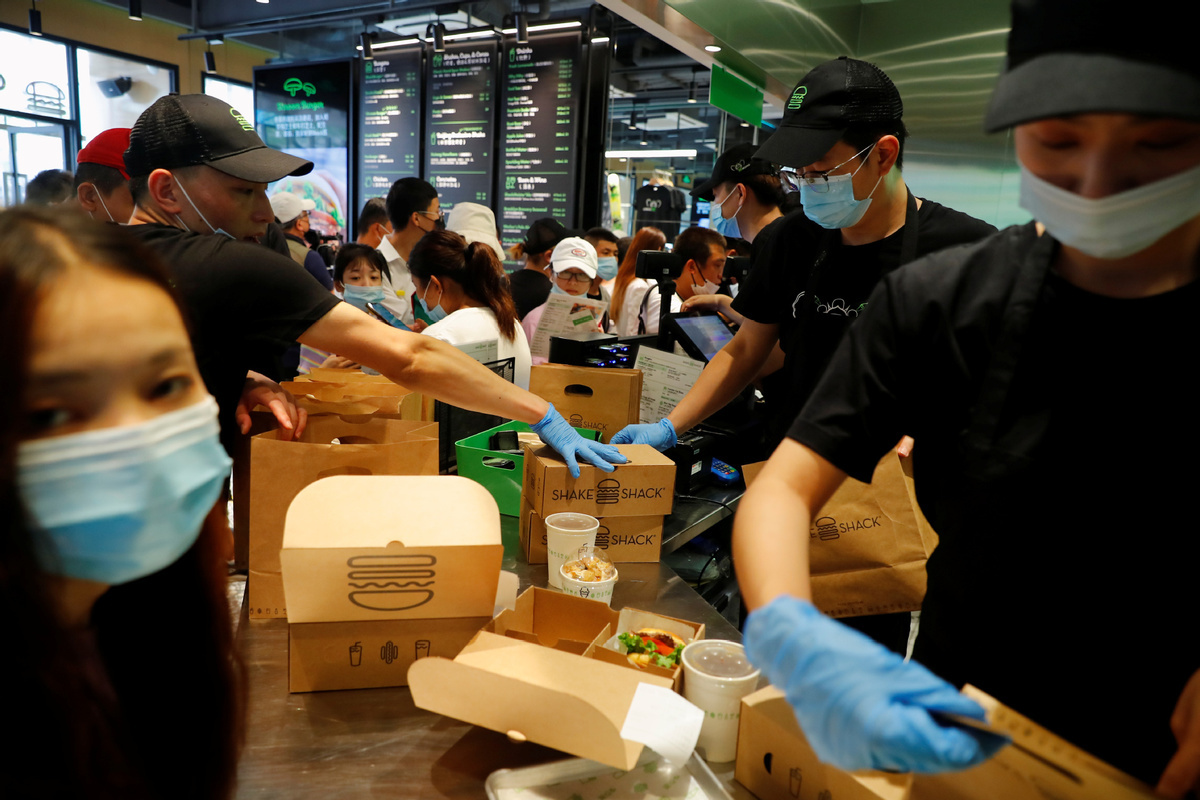 The first Beijing outlet of US fast food chain Shake Shack, in the city's Sanlitun area, is packed with customers on Wednesday, its official opening day. [Photo/Agencies]

The survey was conducted in late May and June among more than 100 of the council's member companies doing business in China; half of them are manufacturers, and 45 percent provide services.

It found that projections by the companies for the five-year business outlook in China seem bullish, with nearly 70 percent expressing optimism about market prospects, and 87 percent saying they have no plans to shift production out of China.

China was reported to be either the top or among the top five priorities for their companies' global strategy, according to 83 percent of respondents.

The findings suggest US companies remain committed to the China market over the long term, despite years of trade friction and ever-rising calls for economic decoupling by political hawks.

Profitability is also a key component of long-term confidence in the China market, the survey found, as 91 percent of companies indicate their China operations are profitable, albeit at a lower margin than in years past.

"According to our data, the primary restraint on profitability is COVID-19 and its impact on the economy," it said. "The majority of respondent companies also saw an increase in revenue last year."

But despite long-term optimism, bilateral trade friction and especially the outbreak of COVID-19 are weighing on the investment decisions and near-term economic prospects of US companies in China.

When asked "Why did your company reduce or stop planned investment in China in the last year?", 93 percent of the US companies said the top reasons were increased costs or uncertainties arising from US-China tensions and COVID-19.

Only 11 percent cited "better business prospects in another country" as a reason to curtail their activities in China.

The tensions between the two countries seem to be escalating, observers say, with the US administration churning out a barrage of hard-edged actions against China, mostly citing national security concerns.

In 2020, the most debilitating impact of bilateral trade tensions－according to half of respondents－was lost sales due to customer uncertainty about continued supply, the US-China Business Council survey said.

"Recent US policies restricting the sales of certain products and services to some Chinese companies have begun to impact more commercial interactions between US companies and their Chinese customers," it said.

As to protecting intellectual property, which has been at the center of the bilateral trade friction, the survey found that 61 percent of the US companies reported China's IP protection had "greatly improved "or "somewhat improved", the highest rating in a decade. Only 2 percent reported otherwise.

Companies reported that disputes are increasingly handled by judges with a nuanced understanding of IP issues and by more motivated police willing to raid infringing factories. It appears that there is a general awareness on the part of partners and license-holders about the importance of protection, the survey noted.

"US-China trade and investment supports about 2.6 million American jobs," USCBC President Craig Allen said. "We need to sustain and grow those jobs in future years, while finding ways to reduce conflict in other areas of the relationship."

The USCBC said US businesses regard the agreement as a stabilizing force in an otherwise rapidly deteriorating bilateral relationship and remain overwhelmingly supportive of it.

It noted that since the deal's signing, China has taken steps to liberalize its financial services sector to foreign companies, significantly reduce barriers to trade in the agriculture sector and strengthen its domestic legal and enforcement regime for protecting intellectual property rights.

Claire Reade, senior associate and trustee chair in Chinese business and economics at the Center for Strategic and International Studies in Washington, also said that even as policy fireworks explode on both sides, the phase one trade deal is still being implemented, with China further opening its financial markets and reducing nontariff barriers.

Liu Yinmeng in Los Angeles contributed to this story.