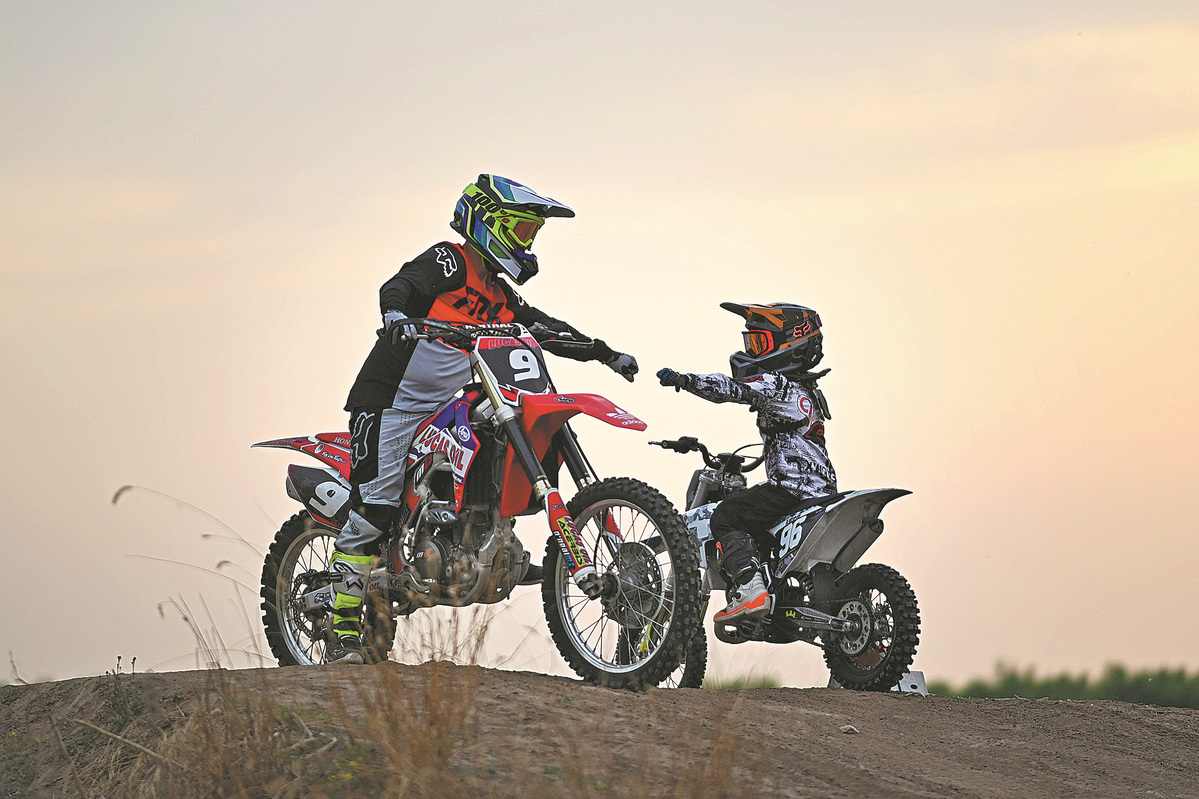 A father and his son both take part in motorcycle training in Beijing in May. WEI XIAOHAO/CHINA DAILY

Li Dezhi, 38, is a CEO by day and a motorcycle enthusiast at night. The exhilarating sound of the engine, he said, frees him from the pressure of work and everything else.

"My mind is stimulated the moment I squeeze the clutch. Although I may be riding on the East Fourth Ring Road in Chaoyang district, I'm dreaming of riding on dirt across mountains and deserts," he said.

Li isn't the only one who rides to help slake their thirst to be in the countryside, especially since long-distance travel has been curtailed for months for city dwellers due to the resurgences of the COVID-19 pandemic.

The number of people who ride motorcycles for commuting and entertainment has been expanding. That, plus the surging popularity of food delivery, has provided an impetus for the rise of the motorcycle industry.

In Beijing, there were 120,028 people who applied for a motorcycle driver's license in the first half of the year, accounting for about 45 percent of all driver's license applicants, according to State broadcaster China Central Television.

Nationally, 5.34 million motorcycles were newly registered for use in the first half of this year, an increase of 1.08 million or 25.38 percent compared with the number of the same period last year, according to the Ministry of Public Security.

"The first impression I had of motorcycle riding was that it's convenient for commuting," said 28-year-old Beijing resident Wu Zhao.

Wu said he was motivated to switch from cars to motorcycles by the surge in gas prices in the spring. "It also makes it easier and cheaper to park in Beijing — such a crowded city."

Another Beijing resident, Liu Yifan, 32, said riding a motorcycle is beneficial in many other ways.

"Commuting to work takes me about three hours by subway per day. It's quite difficult to get a vehicle registration plate for a car in Beijing — I have applied for more than five years yet still can't get one. Electric bikes need to be charged frequently to cover the distance I need to go. Motorcycles turned out to be an ideal substitute," Liu said.

After a month, Liu said she came to think of motorcycle riding as a sport. "Riding on a replica racing motorcycle gives me a mixed feeling of exhilaration and fear, but also relaxation, which helps me to deal with work and the pressures of life, especially when faced with a COVID-19 resurgence."

Many people like Liu who took up motorcycles as a convenient method of transportation during the pandemic also discovered that their two wheels provided a release for their urge to go to wild, untamed areas. In 2020, the first year of the spread of COVID-19, the number of newly registered motorcycles surged 43 percent annually to 8.26 million. That number grew 21.67 percent year-on-year to 10 million last year, said the Ministry of Public Security.

Liu said the looks of a motorcycle rider are also important. She said people click and comment when she posts pictures of the outfit she wears when riding.

"It can be expensive. I buy two or three leather coats a year, with each running about 3,000 yuan ($430), several pairs of trousers that each cost around 1,000 yuan, several hundred for gloves and over 1,000 yuan for a helmet. Spending on this hobby can add up to tens of thousands of yuan a year," she said.