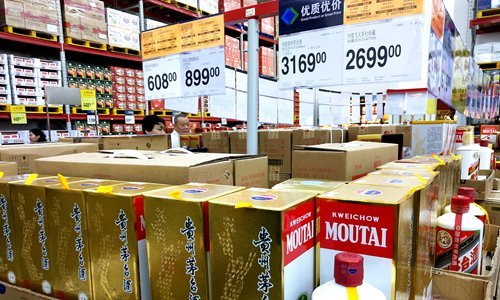 Bottles of Moutai liquor on sale at a supermarket in Shenzhen, South China's Guangdong Province, in January. (Photo: IC)

Shares of Kweichow Moutai Co., China's leading liquor maker, inched slightly up after opening low in morning trading on Friday, after the company was specifically mentioned by a regulatory notice from China's top market regulator over the pricing of its liquor during the upcoming holiday season.

Kweichow Moutai, the most valuable share at the Chinese A share market, inched up 0.49 percent to close at 1,839.28 yuan ($281.74) per share, after opening up 1 percent lower after the State Administration for Market Regulation issued an unusual notice saying that it will specifically monitor the price of the company's liquor products during the upcoming New Year and Spring Festival holiday season. Usually, such notices would not mention specific brands.

The notice came as China tightens its grip on monopolistic behaviors by companies, after the annual tone-setting economic meeting made strengthening anti-monopoly and preventing disorderly expansion of capital top priorities for next year. On Thursday, the country's top e-commerce platform Alibaba was put under an anti-monopoly investigation.

Hoarding by traders and supply-side manipulation have been underlying issues for the runaway price of Moutai, analysts pointed out.

The liquor sector inched down 0.02 percent in morning trading Friday.