MSCI omits 10 Chinese firms in index, but impact is limited in long run 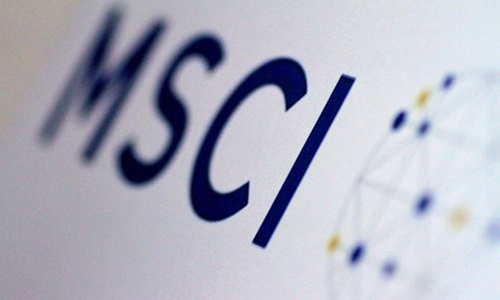 MSCI, a US-based compiler of investment indices, said in a statement on Tuesday that it would delete 10 securities of Chinese companies blacklisted by the US from its Global Investable Market Indexes (GIMI), after similar recent moves by London-based FTSE Russell, S&P Dow Jones indices and NASDAQ.

Analysts said that the removal of Chinese securities with sound business operations from the index reflects the hegemony of the Trump government in the capital markets and political suppression of Chinese companies, which is certain to disturb the order of global capital markets. They added that there will be a short-term impact on the stock prices of these companies, but only a limited impact in the long run.

"The US is likely to expand the scope of its crackdown on Chinese companies. But now that the US dollar has weakened and the yuan has strengthened, global investors are bound to allocate more funds to Chinese assets, and stocks are an important part of that. There will still be foreign capital inflows into China's capital market," Hu Qimu, a senior fellow at the Sinosteel Economic Research Institute, told the Global Times on Wednesday.

Hu added that the more slowly the global economy recovers, the more investors will buy yuan-denominated assets, as China's economic recovery is robust and it is the only major economy to expand from last year.

The index compilers' move came after an executive order from Trump banning US investors from trading in 35 Chinese stocks, saying they have a relationship with China's military, and MSCI said that the order "may have a significant impact on the investment processes of global investors", based on feedback from more than 100 market participants.

Analysts said that in the short term, there will be an impact on the share prices of the companies dropped from the indices.

"There are so many index-tracking funds around the world. The removal of these Chinese securities from indices compiled by MSCI, NASDAQ and FTSE could cause tracking funds to passively undersell these stocks, causing short-term falls in their share prices. But the long-term impact will be small because investors know that there is nothing wrong with their businesses, it is just political repression by the US," Hu noted.

Chinese chipmaker SMIC, for instance, reported record high third-quarter revenue despite US export curbs, with revenue hitting 7.638 billion yuan ($1.15 billion), up 13 percent from the second quarter and 31.7 percent on a yearly basis.

"Objectively speaking, there will be some influence on the availability of overseas financing for the companies. For China, the construction of overseas financing channels should be further strengthened," Ding Meng, an economist at the Bank of China (Hong Kong), told the Global Times on Wednesday.

Zhou Xibing, a financial writer who follows Huawei closely, told the Global Times that using US laws to sanction companies from other countries is long-arm jurisdiction. The process of Chinese companies going public in the US is likely to get more complicated.