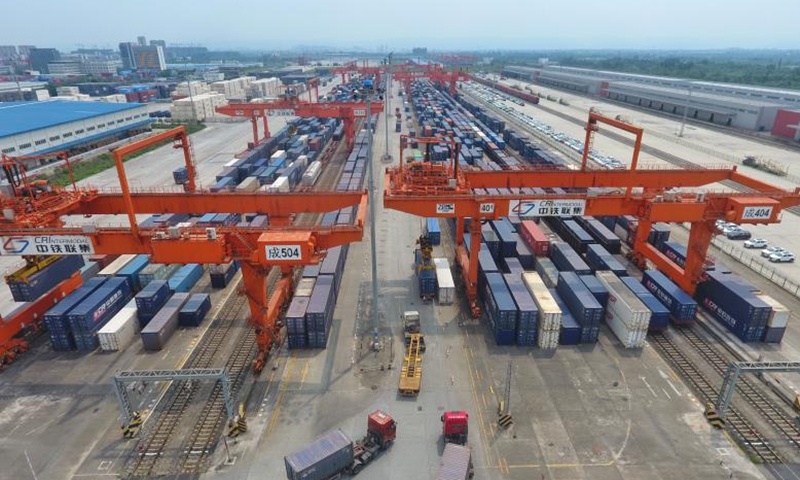 The Framework Agreement on Facilitation of Cross-border Paperless Trade in Asia and the Pacific, a UN treaty deposited with the Secretary General of the United Nations, consists of 25 articles, mainly covering a trade facilitation policy framework, cross-border paperless trade facilitation, and cross-border mutual recognition of trade data and documentation in electronic form.

Analysts said the agreement will enhance the efficiency and transparency of international trade by promoting the exchange and mutual recognition of trade data and documentation in electronic form in the region, and creating a favorable legal regulatory environment for cross-border paperless trade.

"The agreement will further enhance trade connectivity in the Asia-Pacific region, and contribute to accelerating economic recovery and development in the post-epidemic era", said the person in charge of the department of international trade and economic affairs of the China's Ministry of Commerce (MOFCOM) on Sunday, according to the ministry's website.

It is of great significance for China to forge new advantages in international cooperation and competition through high-level opening-up, the official added.

Trade cost reductions expected from full implementation of cross-border paperless trade are estimated at 10-30 percent of existing transaction costs, depending on the current state of paperless trade development in the participating countries, according to Economic and Social Commission for Asia and the Pacific of UN.

Hu Qimu, chief researcher at the Sinosteel Economic Research Institute, said that this is another important step in the economic integration of the Asia-Pacific region after the signing of the Regional Comprehensive Economic Partnership (RCEP) and will help unify the economic and trade laws and regulations of different countries and regions.

"In general, since international trade and investment are conducted across legal frameworks, electronic certificates are not generally recognized among economies as trade needs to be paper-based to serve as evidence for dispute resolution. The core of the agreement is compatibility and mutual recognition of legal framework on trade," Hu told the Global Times on Sunday.

But it will not be completed in the short term as it involves the adjustment of the legal system of each member. However, the agreement has already made clear this principle, and it will be adjusted in this direction in an orderly way, he added.

Tian Yun, vice director of the Beijing Economic Operation Association, said that achieving electronic clearance still has certain difficulty, because of the level of electronization and informatization differentiate among customs.

"China has benefited from the rapid development of information technology in recent years, and the development of e-commerce is growing. E-commerce and mobile payments are commonly used in China, but they are not the norm in many other countries. The vast majority of countries, including many in Europe and the Americas, have not reached the current level of information services in China," Tian told the Global Times on Sunday.

According to the MOFCOM, China was the world's largest online retail market for eight consecutive years ending in 2020. Since 2010, the volume of transactions in China's cross-border e-commerce sector has grown more than 20 percent annually.

Tian noted that the agreement also involves how China will and can provide technical support and assistance to other economies in informatization.