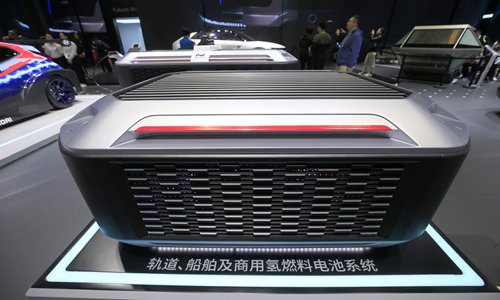 A view of the hydrogen fuel cell at Hyundai's exhibition area during the 2nd CIIE. (Photo: GT)

The hydrogen-related technologies showcased by various multinational corporations at the second China International Import Expo (CIIE) will affect the development of China's new energy industry in the long term, representing an essential part of the country's high-quality growth, experts said.

Automakers like Toyota, Honda, and Hyundai have all brought their hydrogen fuel cell cars to the second CIIE which ran until Sunday.

Such hydrogen-related technologies have attracted much attention and aroused discussions among industry players and investors over the future development of China's new energy industry.

"China's development of the hydrogen energy industry is actually of great significance for the entire renewable energy sector," Liu Tao, a senior engineer specializing in LNG cryogenic storage and transportation, told the Global Times on Sunday.

"In China's central and western regions, electricity generated from renewable resources such as wind and solar is often unable to be integrated into the State Grid due to the instability of the power, with most of the power being wasted. If such electricity can be used to produce hydrogen, then power generation from the renewable resources will be properly converted and stored," Liu noted.

However, Lin Boqiang, director of the China Center for Energy Economics Research at Xiamen University, pointed out that there is still a long way to go for hydrogen energy's utilization in China.

So far, the most important utilization scenario is hydrogen fuel cell vehicles, but the costs of hydrogen cars, cryogenic storage, and transportation of hydrogen, as well as hydrogen fueling stations are all too expensive for the market to shoulder, Lin explained.

Liu echoed Lin's concerns, explaining that, "It is true that China's current technologies in hydrogen liquefaction and transportation of liquefied hydrogen are not mature, which explains why the costs are so high."

"But the introduction of new technologies through platforms like the CIIE will reduce production and operation costs for the hydrogen energy industry, as well as reduce the operational safety risks in the future," Liu said.

At present, several tech companies in Canada, Japan, and other countries have already developed mature technologies for hydrogen energy utilization.

An employee from Pacific Wellfare Resource Investment told the Global Times that the company has solved the storage and transportation problems of liquefied hydrogen, and is now in discussions with some Chinese authorities on possible cooperation.

Over the past years, it has become increasingly obvious that electric vehicles' industrial chain involves high pollution and emissions, and the recycling of used batteries is another big problem, which is why there has been a rising call for the zero-emission hydrogen energy utilization in China, Liu said.

"The introduction of hydrogen energy technologies and the development of the hydrogen energy industry should be an essential part of China's pursuit toward high-quality growth," Liu concluded.