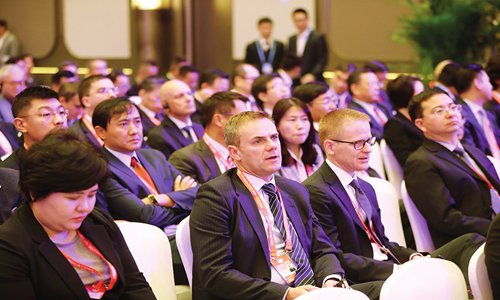 A corner of the first Qingdao Multinationals Summit in East China's Shandong Province over the weekend. (Photo:VCG)

"China welcomes multinationals' expanding investment in the country," Han said in addressing the opening ceremony of the first Qingdao Multinationals Summit in East China's Shandong Province over the weekend.

China has attracted $2.1 trillion worth of foreign investment during the past 40 years, making it one of the largest investment destinations, according to a report released at the summit.

The huge amount of foreign investment shows worldwide confidence in China's economic growth, Cheng Dawei, a research fellow at the Institute of China's Economic Reform and Development under Renmin University of China, told the Global Times on Sunday.

"Even during the worst period of the US-China trade war, some multinationals uphold an 'In China, For China' strategy. That deserves praise," Cheng said. Multinationals - potential policy boosters - are familiar with international situations, and therefore should make more of a contribution to improving international economic cooperation, she said.

"In China, For China" means multinationals based in China focus their sales efforts on the Chinese market.

Latest data from the Ministry of Commerce showed that foreign direct investment into the Chinese mainland grew 6.5 percent year-on-year to 683.21 billion yuan ($96.5 billion) in the first three quarters of 2019. A total of 30,871 new foreign-funded enterprises were established during the same period.

"Affected by the prolonged trade war, some multinationals might become indecisive and take a wait-and-see attitude in expanding investment. But as companies are in pursuit of maximum profits, they can't afford to abandon the huge Chinese market, with its low labor costs as well as abundant resources in the country," Cheng said, adding that multinationals also benefit from investment in China.

Lagardere Travel Retail started operations in China in 2007 and has been operating shops at airports and railway stations in the country.

"China has been well organized and market-oriented," he said told the Global Times on Sunday.

"Thanks to a sound investment environment and the increase in the number of airports in the Chinese mainland, there are many opportunities [for us]. In the future, we hope to help Chinese airports enhance revenue from non-flight businesses, including advertising and leasing," Fabre said.

"Now, China doesn't lack technology and capital. For foreign companies that want to succeed in China, they need to figure out what their competitive advantages are and bring their highest global operation standards in technologies and human resources, among other aspects," Fabre said.