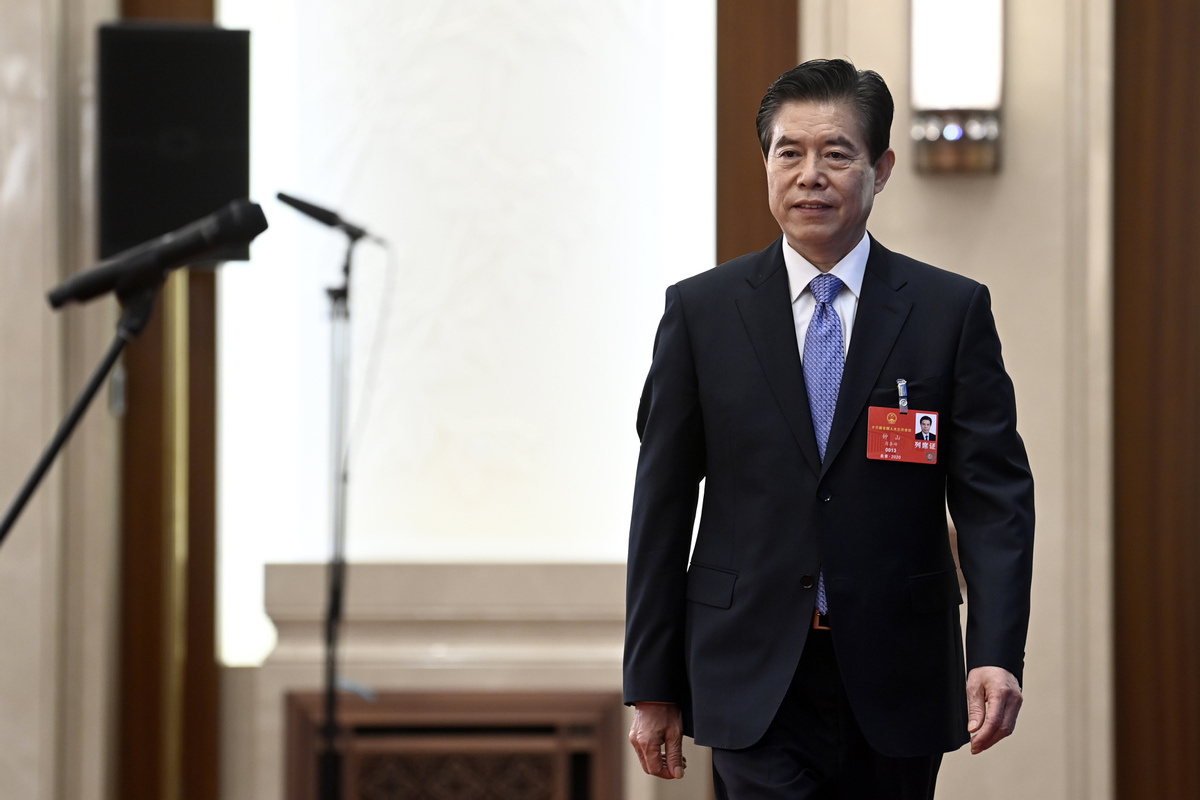 Commerce Minister Zhong Shan is seen in Beijing on the sidelines of the annual national legislative session on May 25, 2020. (Photo: Xinhua)

China will do whatever is necessary to stabilize foreign trade and secure supply and industrial chains in the second half of this year amid a world business environment that remains complicated and challenging for companies, the country's top commerce official said.

New foreign trade formats have emerged as growth points, and China will encourage companies to further expand cross-border e-commerce and facilitate trade based on market procurement, he said, adding that the country will be well prepared for the third China International Import Expo to be held in Shanghai later this year.

Despite lingering external risks, China's exports and imports, backed by recovering demand at home and in overseas markets, continued to improve in July, doing better than expected after the second quarter and signaling overall stability in the second half of the year, General Administration of Customs data released on Friday indicated.

Although the pandemic has affected global multinational investment, the minister noted that China's utilization of foreign capital remains stable and saw positive growth in the second quarter. Bigticket foreign investment projects have notably risen nationwide over the past few months, according to the ministry, especially in China's pilot free trade zones.

Given the improvement in China's business environment, sound and complete industrial supporting capabilities, a market of 1.4 billion people and new opening-up and reform measures to be introduced in the second half, Zhong said he believes smart foreign businesses will not turn away from China's huge market.

In addition to quickening the pace of bilateral and multilateral free trade agreements signed with economies such as South Korea, Cambodia and the European Union this year, China has taken major steps to help its more than 400,000 export-oriented companies to resolve issues amid the rising uncertainties and disruptions that the COVID-19 outbreak has brought to the global economy and trade, according to the Ministry of Commerce.

Zhong said the government will effectively use the negative list for foreign investment issued in late June, which cut the number of sectors off-limits to foreign investors to 33 from 40 in 2019.

He said the government will build an open platform to deepen reforms in pilot free trade zones by giving them greater autonomy, and will form more institutional innovations that can be nationally replicated and promoted.

Apart from implementing the overall plan for developing the Hainan Free Trade Port and drafting a negative list for the cross-border service trade, he added, the ministry will ensure the power of the Foreign Investment Law and other supporting regulations. China will introduce working measures for handling the complaints of foreign-invested enterprises, and will protect intellectual property rights and the legitimate rights of foreign firms to create a stable, fair and transparent business environment.

Because the global economic downturn's effect on demand for goods and on supply and industrial chains has become clearer since June and will continue to do so up to December, it is practical for China to accelerate establishing a "dual-cycle" development pattern that takes the domestic market as the mainstay while domestic and foreign markets can boost each other, said Chen Bin, executive vice-president of Beijing-based China Machinery Industry Federation.

To minimize risks, Chen said, China must continue its pivot toward growth driven by domestic demand. The nation is currently upgrading its domestic demand system in an open environment, so that "dual-cycle "development－domestic and international－will continue in tandem.

The country's top leadership has reaffirmed the "dual-cycle" development pattern on various occasions since May, indicating that the strategic priority of China's economic growth is accelerating the shift from export-led to domestic-demand-driven growth.

Responding to local governments' call for enhancing high-tech manufacturing and supported by favorable policies, many companies have set up units, or charted plans, to strengthen their innovative branches.