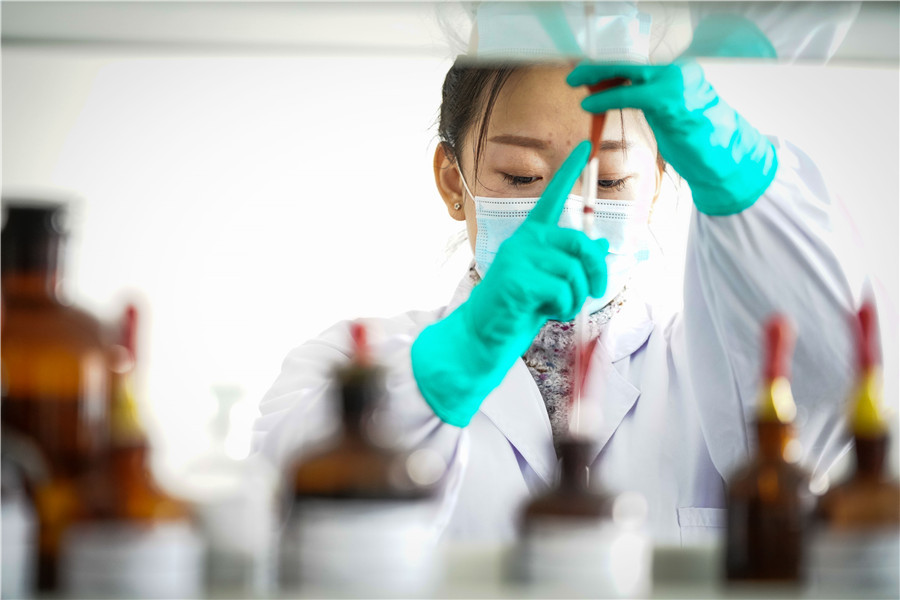 A lab assistant tests drugs at a pharmaceutical company in Harbin, capital of Heilongjiang province, on Wednesday. (Photo/Xinhua)

Pharmaceutical multinational corporations are confident of the resilience of China's healthcare ecosystem and its ability to win the fight against the COVID-19 epidemic, said Asgar Rangoonwala, chairman of the Executive Committee of the Research & Development-based Pharmaceutical Association Committee (RDPAC) under the China Association of Enterprises with Foreign Investment.

Pharmaceutical MNCs are also optimistic about the potential of the Chinese healthcare market, and will continue investing in China to produce world-class innovation for patients in the country and around the world as the nation is highly regarded in the global strategies of these firms, he said.

"After the initial outbreak, it is evident that China swiftly mobilized unprecedented resources from across the country to contain the spread of the epidemic and prevent it from becoming a global epidemic," the official said.

He added: "The outbreak of COVID-19 is a public health challenge for China and the world. As a responsible country and world power, China has demonstrated outstanding responsibility and sacrifice, bearing the heaviest burden to combat emerging diseases and taking measures to mitigate the impact on the global community. We strongly commend China's efforts in the fight to control and contain the spread of the virus."

Compared with the Severe Acute Respiratory Syndrome (SARS) outbreak in 2003, COVID-19 is less fatal but more widespread, and has far greater economic impacts as China's economic integration stands at a much higher level today, a report by the Shanghai Institutes for International Studies said.

Many economic sectors have suffered from the short-lived impact of the disease because of factors such as the prolonged Spring Festival holiday, the avoidance of large gatherings, the temporary closure of manufacturing facilities, and the suspension of logistics.

Thanks to the country's efforts, data from the National Health Commission have shown that the number of confirmed new cases outside Hubei province steadily declined across China along with a rapid rise in the number of recovered and discharged patients.

On Tuesday, 119 new cases were reported in the Chinese mainland, including 114 in Wuhan, the capital city of Hubei province. A total of 2,652 patients were discharged from hospitals after recovering from the virus, the commission said on Wednesday.

Rangoonwala, who is also president of Xian Janssen Pharmaceutical, said the epidemic's impact on pharmaceutical MNCs' production capacity is slight, and the situation has been kept under control.

Most production sites of RDPAC member companies are fully or at least partly operational thanks to strong support from local authorities.

Before the outbreak, business contingency plans were already in place to handle unexpected scenarios, with measures including emergency stocks at distribution centers outside high-risk areas, as well as collaboration with external suppliers.

"Our member companies have consistently and diligently been monitoring their own pharmaceutical supply chains and global suppliers and do not expect any long-term impacts unless the disruption caused by COVID-19 is sustained over the next few months," he said.

The official added delivering medicines in a timely manner is critical to protecting and extending the lives of patients, and the companies are committed to ensuring the supply of high-quality drugs, especially during a time of crisis.

The recent epidemic has also underlined the importance of developing a resilient and sustainable healthcare ecosystem that should be embedded with key components such as pharmaceutical innovation, high drug quality, and supply sustainability, he explained.

As the COVID-19 outbreak happened, the RDPAC immediately established a task force involving 42 member companies to help with epidemic control, including making significant donations to Wuhan city, Hubei province, such as purchasing urgently needed medical materials from overseas and looking into previous research for potential solutions.

RDPAC companies are leveraging digital healthcare tools to provide disease management services, medication guidance, online consultations, and drug deliveries to patients with life-threatening diseases such as cancer, kidney problems, and severe immunological diseases who are facing difficulties getting critical treatments and medications due to the epidemic.

The RDPAC will continue mobilizing resources to support China in developing a sustainable healthcare ecosystem by sharing international experiences and introducing world-class innovation to Chinese patients, he said.