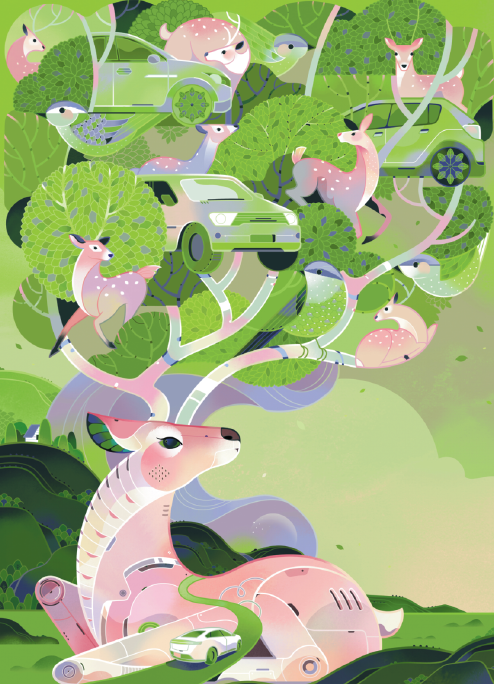 Editor's note: A survey among China Daily's overseas readers ahead of the 20th National Congress of the Communist Party of China shows that the nation's ecological progress, economy, diplomacy, science and technology, and the Belt and Road Initiative are among some of the most closely observed issues. China Daily is publishing a series of special articles to offer readers an in-depth look at these topics.

After years of development, the nation is the world's largest producer of wind and solar power, as well as the largest domestic and outbound investor in renewable energy, according to the National Energy Administration.

Wei Hanyang, a power market analyst at research company BloombergNEF, said part of the reason for this rapid development is China's unparalleled advantages in boosting clean power installation due to massive demand from the domestic market. State-owned grid operators have also made efforts to ensure renewables are consumed, rather than wasted.

He believes the nation's renewable energy sector will see steady growth and that solar power, in particular, will witness further widespread installations.

China's rapid development of renewable energy has also attracted multinationals. Shell plc, SABIC and Honeywell have announced plans in recent years to invest in the nation's renewable energy sector due to its rapid growth momentum and huge potential. Global energy and chemical giants are drawing up local plans that cover a broad range of subsectors such as petrochemicals, hydrogen, vehicle charging stations and carbon capture, utilization and storage, or CCUS.

Shell plc, which is based in London, has steadily invested in China's renewable energy market in recent years. Part of the company's blueprint is to expand its hydrogen footprint in the country by building a network of hydrogen refueling stations in Shanghai — Shell's first hydrogen refueling network in Asia — in cooperation with State-owned enterprise Shenergy Group Co.

The joint venture said it plans to build six to 10 hydrogen refueling stations in Shanghai and the Yangtze River Delta region in the next five years, rising to 30 stations by 2030.

Shell also expressed optimism about the prospects for CCUS in China, believing it is essential to helping the nation achieve a carbon emission peak by 2030 and carbon neutrality by 2060.

Jason Wong, executive chairman of Shell Companies in China, said the nation's significant geological potential for storing carbon — it has an estimated 2,400 gigatons of storage capacity, second only to that of the United States — means there is plenty of potential to tap.

US energy company ExxonMobil has announced that it will cooperate with China National Offshore Oil Corp and Shell plc to develop a carbon capture and storage, or CCS, hub in Huizhou, Guangdong province. The facility, China's first large-scale offshore CCS hub capable of capturing up to 10 million metric tons of carbon dioxide annually, will significantly reduce carbon dioxide emissions and meet the decarbonization needs of enterprises in the area.