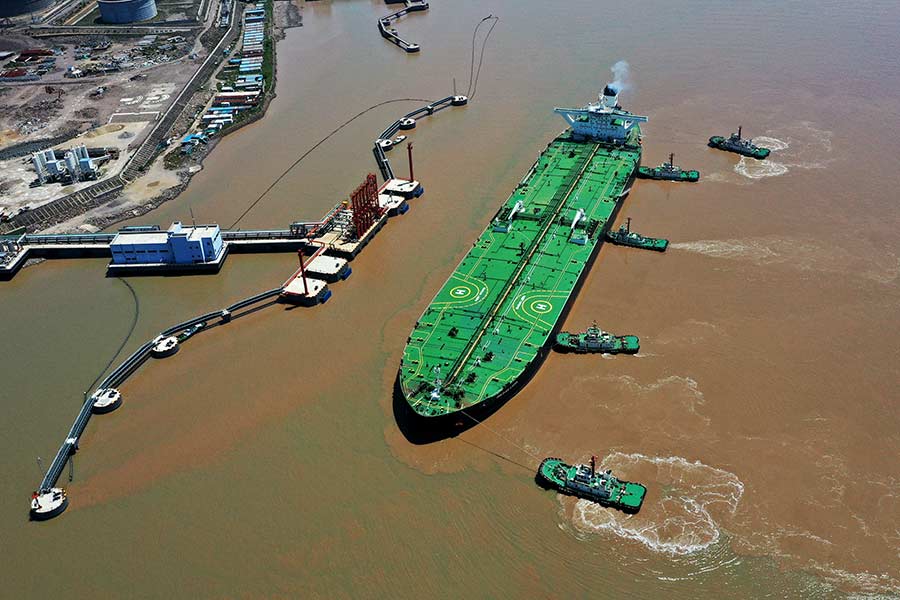 A foreign oil tanker docks at a port in Zhoushan, Zhejiang province, on May 21. (Photo: Yao Feng)

While China has stepped up efforts to boost domestic crude oil production and is also trying to replace oil with cleaner alternatives including natural gas, biomass and renewable energy, insiders predict that the country's dependency on foreign crude oil imports will not ease in the short term.

China, the world's largest importer of crude oil and gas, imported 440 million metric tons of crude oil in 2018, a year-on-year increase of 11 percent, with its foreign oil dependency ratio reaching 69.8 percent. This reliance is expected to grow in 2019, according to China National Petroleum Corp's Economics and Technology Research Institute.

Domestic oil companies have made significant progress in efforts to raise production in the past few years. As a result, China's decline in crude oil production slowed in 2018, with total crude production reaching 189 million tons, 3 million tons less than the previous year and 1.3 percent down compared with the same period in 2017, according to an annual report released at the end of April on China's energy development by the China Electric Power Planning and Engineering Institute.

Despite the decline of China's crude oil production slowed down last year, after two consecutive years of production cuts, Li said China's dependency on foreign crude oil imports will continue to rise this year, due to the country's surging demand and booming refining sector.

Domestic crude oil output has faced a bottleneck for years, and despite the slowdown in crude production decline last year, we can only expect stable production rather than a rise in the near term, which is still far from enough to meet the gap, said Li.

The consulting company estimated that the dependency ratio will reach 72 percent in 2019, higher than the 69.8 percent in 2018, and will continue climbing in the years to come.

The domestic refining market is expected to be further diversified this year, with numerous private refining projects actively under construction, which will further boost the country's total refining capacity.

Private enterprises including Zhejiang Petrochemical, Hengli Petrochemical and Shenghong Group have been constructing sizable oil refineries, which are expected to increase capacity by 1.52 million barrels a day from 2019 to 2021.

According to Oil 2019, the International Energy Agency's annual outlook for global oil markets, which was released at the end of April, China will exceed the United States to have the world's largest refining capacity in 2024.

Analysis from Bloomberg Intelligence estimated earlier that China will see rapid refinery expansion from 2019 to 2021, with additional capacity of 3.1 million barrels per day.

Li said the country's policy on refined oil exports will also affect the amount of crude imported to a large extent.

"China's booming refining sector will add more pressure to crude demand, and unless the government restrains policy on refined oil exports to suspend the investment impulsion for refining projects, this will only require more crude imports in the months to come," she said.