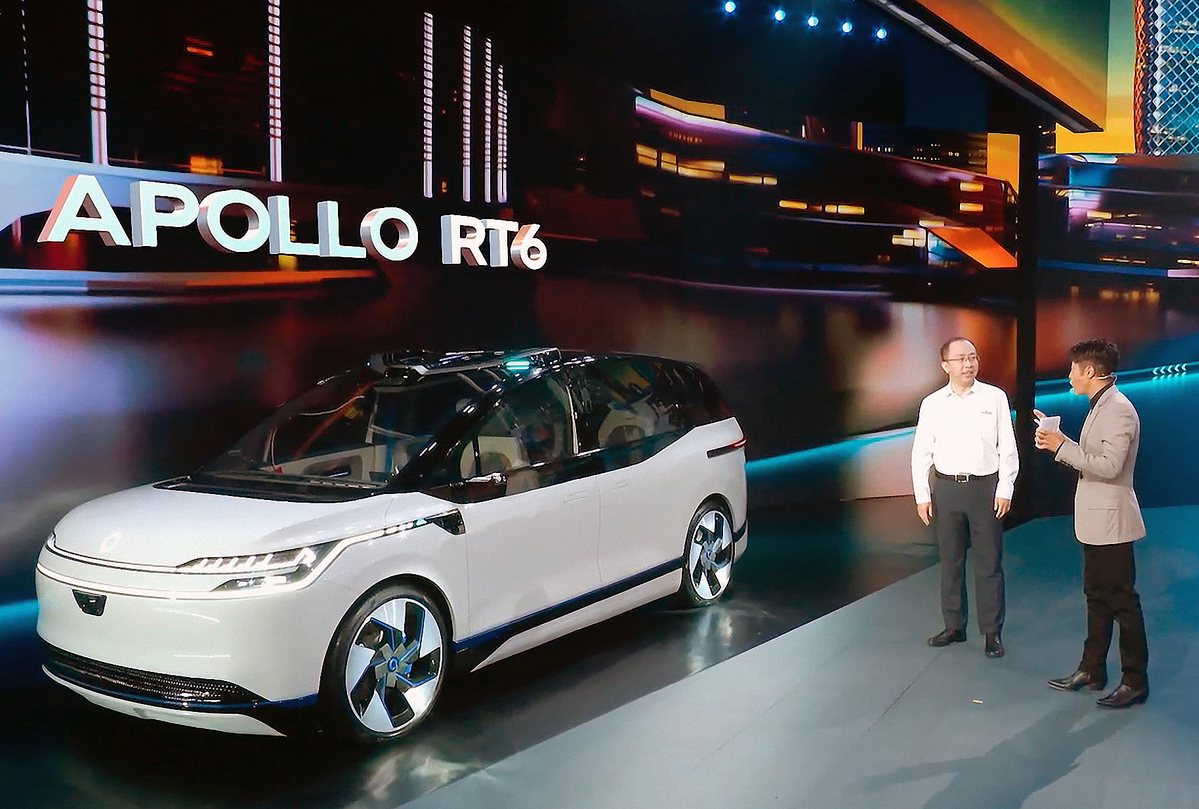 An Apollo RT6 is seen during the launch ceremony in Beijing on June 21, 2022. [Photo provided to CHINA DAILY]

Automotive transportation and logistics are among the sectors that are expected to see faster adoption of artificial intelligence technologies in China over the next decade, driving billion-dollar opportunities, company executives and experts said.

Market consultancy McKinsey forecasts that by 2030, AI can boost transportation and other key sectors in China, adding significant economic value, if strategic cooperation and capability building occur across multiple dimensions.

According to its estimates, automotive, transportation and logistics are collectively expected to contribute the majority, around 64 percent, or $600 billion, in economic value annually for China.

China's auto market stands as the largest in the world, with the number of vehicles in use surpassing that of the United States. The sheer size－which McKinsey expects to grow to more than 300 million passenger vehicles on the road in China by 2030－provides a fertile landscape of AI opportunities, said Wu Ting, a partner at McKinsey.

"Indeed, our research finds that AI could have the greatest potential impact on the automotive sector, delivering more than $380 billion in economic value. This value creation will likely be generated predominantly in three areas: autonomous vehicles, personalized services for auto owners, and fleet asset management," Wu said.

Autonomous vehicles make up the largest portion of value creation in this sector ($335 billion). Some of this new value is expected to come from a reduction in financial losses, such as medical, first-responder, and vehicle costs, McKinsey said.

The company forecasts that roadway accidents stand to decrease by an estimated 3 to 5 percent annually as autonomous vehicles actively navigate their surroundings and make real-time driving decisions without being subject to distractions, such as text messaging, that tempt humans. The value would also come from savings realized by fewer drivers as cities and enterprises replace passenger vans and buses with shared autonomous vehicles.

Already, significant progress has been made by both traditional automotive makers and AI players to advance autonomous-driving capabilities to level 4 (where the driver doesn't need to pay attention but can take over controls) and level 5(fully autonomous capabilities in which the inclusion of a steering wheel is optional).

For instance, WeRide, a Chinese autonomous driving startup that achieved level 4 autonomous-driving capabilities, completed a pilot of its Robotaxi in Guangzhou, Guangdong province, with nearly 150,000 trips in one year from November 2019 to November 2020 without any accidents with active liability, McKinsey said.

"We've created a compelling customer experience on all touch points powered by digital technologies and data," said Jin Weipeng, manager of internet application development at the management services department and head of the Chengdu R&D center of FAW-Volkswagen.

FAW-Volkswagen works hard to create a seamless integration between software and the ecosystem of external services consumed by drivers－such as streaming media, parking, charging and navigation services－and also maintain seamlessness even as the software in every element continues to evolve rapidly.

A report released by United States-based tech heavyweight IBM Corp and market research company Morning Consult also showed that companies in the automotive sector are far more likely to be deploying or accelerating their rollout of AI than peers from other industries.

Wu from McKinsey said, "Our research finds that offering personalized services to car owners could deliver $30 billion in economic value by reducing maintenance costs and unanticipated vehicle malfunctions. It can also generate incremental revenue for companies that identify ways to monetize software updates and new capabilities."

AI could also prove critical in helping fleet managers better navigate China's immense network of railway, highway, inland waterway and civil aviation routes, which are some of the longest in the world.

McKinsey's research finds that $15 billion in value creation could emerge as carmakers and AI players specializing in logistics develop solutions that can analyze the internet of things data and identify more fuel-efficient routes and lower-cost maintenance stops for fleet operators.