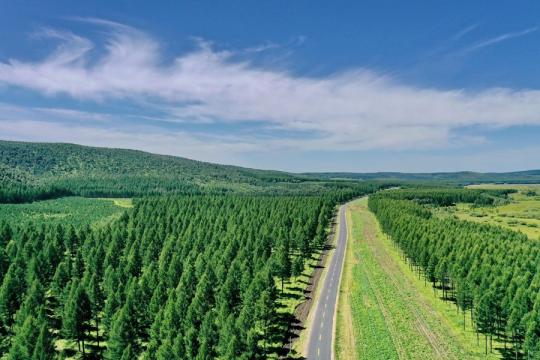 China is on track to relaunch a suspended program that could help boost the country's efforts to deal with the challenges posed by climate change, officials and experts said.

The China Certified Emission Reduction program, a voluntary program in which participants can trade carbon credits, was suspended five years ago.

As an important supplementary mechanism to the nation's carbon trading market, which was launched last year and is so far the world's largest, the CCER is expected to help further cut carbon reduction costs and spur the development of renewable energy resources.

Amid anticipation of its relaunch, however, the quality of carbon credits generated from the program remains a top concern. Experts are suggesting a series of measures to ensure the quality of the credits so that the program can effectively fulfill its role.

Under the CCER program, companies can voluntarily earn carbon credits by taking action to reduce carbon emissions, such as by promoting renewable energy generation and afforestation.

In a recent interview with China Environment News, Li Gao, director of climate change at the Ministry of Ecology and Environment, said that the ministry will endeavor to further improve the CCER trading mechanism.

Apart from drawing up an interim regulation on trading voluntary greenhouse gas emission reductions and relevant technical norms, he said the ministry will organize the construction of registration and trading systems.

Earlier media reports hinted that the CCER may be relaunched as early as this year.

Launched in 2012, the program was suspended in March 2017 by the National Development and Reform Commission, the country's top economic planner, due to the low trading volume and requirements for its standardized operation. However, credits issued when the program was operational can still be traded.

In the country's carbon trading market, which currently only involves 2,162 power generators, enterprises can use CCER credits to offset 5 percent of the carbon emission allowances they need to buy.

The credits have also been traded in pilot carbon trading markets, which were inaugurated in 2013 in six provincial-level regions, including in Beijing, and Guangdong and Hubei provinces. A separate market was also launched in Shenzhen, Guangdong.

Demand for the CCER's relaunch has been ignited by the expansion of carbon trading and the scarcity of carbon credits available on the market.

Zhang Xin, chief economist at the National Center for Climate Change Strategy and International Cooperation, said that around 60 million metric tons of CCER credits have been used so far to offset emission allowance deficits in pilot carbon markets and the national one.

In the first compliance period of the national market alone, about 34 million tons of the credits were used, he said at a forum organized by Environmental Defense Fund China.

China has so far issued CCER credits to 391 projects with a total emission reduction of 77 million tons. "What is notable is that some 80 percent of the projects are about new and renewable energy," he said, adding that clean energy projects contribute about 80percent of the total CCER credits.

"It shows that the country's CCER program in the past few years… has vigorously promoted the healthy and sustainable development of renewable power generation," he noted.

There have been signals for proactive progress of the CCER's relaunch.

Zhang said, for example, China has produced a set of institutional systems for the CCER, including those on examination, approval, registration and trading management.

Wang Naixiang, president of China Beijing Green Exchange, said that the exchange had started the construction of CCER registration and trading systems in 2021. "Currently, the development work is progressing in an orderly manner."

"The figure is double that of 2017, indicating remarkable market growth," it said.

Estimates by some institutes show that the global market for voluntary carbon credits could reach $5 billion to $30 billion in 2030.

However, experts stressed that only a high-quality voluntary emission reduction system can meet the needs of tackling the global climate change crisis.

He called on the Chinese government to accelerate the development of core legal systems and supporting institutions for the CCER, as it strives to ensure the quality of the credits.

The country should also beef up management of CCER programs initiated by local authorities, he said. The national CCER mechanism and projects under it should be assessed regularly so that they can adapt to the latest international trends.

Wu Shuhong, a professor at Beijing Forestry University, said only carbon sinks from forests that are adequately managed can be traded under the CCER mechanism. If without proper management, he said, forests may fall victim to fires, diseases and insect pests, releasing carbon they absorb again into the atmosphere.

Yu Jie, an official from the China Quality Certification Center, said incorporating a high quality requirement into the methodology and standards for examining and approving CCER projects is not enough to ensure the quality.

The examination and approval work cannot be done without personnel having the necessary expertise and capabilities and a sound management mechanism in responsible institutions, she said.