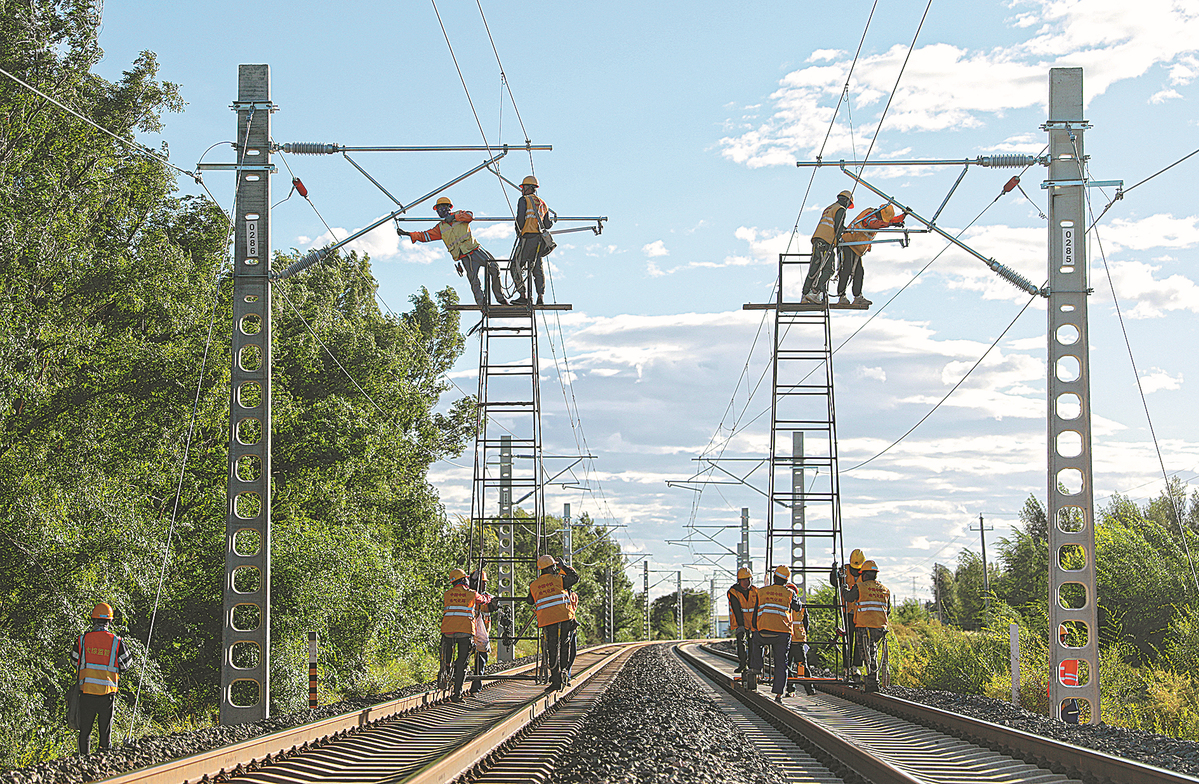 China will step up efforts in the construction of major projects and new infrastructure as part of its overall drive to foster long-term sustained, innovation-driven and high-quality development, the country's top economic regulator said on Monday.

Experts said the government has already introduced a series of stimulus policies for infrastructure spending to shore up growth, and its accelerated push to construct key projects will help boost domestic demand, expand effective investment and stabilize the overall economy.

They said China's economy will continue to pick up in the third and fourth quarters of the year with existing policy support and forceful infrastructure spending.

The country will support the construction of major projects, with a key focus on implementing 102 key projects mapped out during the period of the 14th Five-Year Plan (2021-25) and projects in the five-year plan for transportation development, said Zheng Jian, director of the Department of Infrastructure Development at the National Development and Reform Commission.

He said at a news conference in Beijing on Monday that the implementation of key projects will give a strong impetus to China's economic and social development.

Song Wen, deputy director of the Planning Department at the National Energy Administration, said the NDRC and the NEA are accelerating the push for the implementation and construction of key projects mapped out in the 14th Five-Year Plan to expand effective investment.

She said investment in key energy fields during the 14th Five-Year Plan period is expected to grow by more than 20 percent compared with the 13th Five-Year Plan (2016-20), providing a strong driving force to expand effective demand and promote stable economic growth.

Zhang Zhihua, deputy director of the NDRC's Department of Innovation and High-Tech Development, said he is optimistic about the investment in new infrastructure construction in the future, and the NDRC will ramp up efforts to support projects in the area.

"We expect infrastructure investment will remain strong and do the heavy lifting to support growth," said Lloyd Chan, a senior economist at the Oxford Economics think tank.

Chan said stimulus rolled out in this year's Government Work Report and the 33 measures announced in May will feed through in the second half. New measures also include channeling 300 billion yuan ($42 billion) to specific projects, along with allocating an additional quota of 500 billion yuan in local government special bonds that will be utilized by the end of October as new infrastructure projects become available for infrastructure financing.

Zhou Maohua, an analyst at China Everbright Bank, said the construction of key projects will play a crucial role in stabilizing growth, promoting economic transformation and fostering healthy development in the long run.

Data from the National Bureau of Statistics showed that fixed-asset investment increased by 5.8 percent year-on-year in the January-August period, compared with 5.7 percent between January and July.

Notably, infrastructure investment jumped 8.3 percent during the first eight months of the year, higher than that in the first seven months.

Zhou said he expects that infrastructure investment will continue to improve in the rest of the year, with stimulus policies gradually taking effect.

Considering the gradual normalization of economic activities and the government's strong policy support, Zhou said China's economy will continue to recover in the third and fourth quarters.

Yang Haiping, a researcher at the Central University of Finance and Economics' Institute of Securities and Futures, said infrastructure investment will likely accelerate in the second half of the year.

Warning of challenges and difficulties ahead, Yang said the key is to fully implement the existing policies and tackle any issues faced during the implementation process.