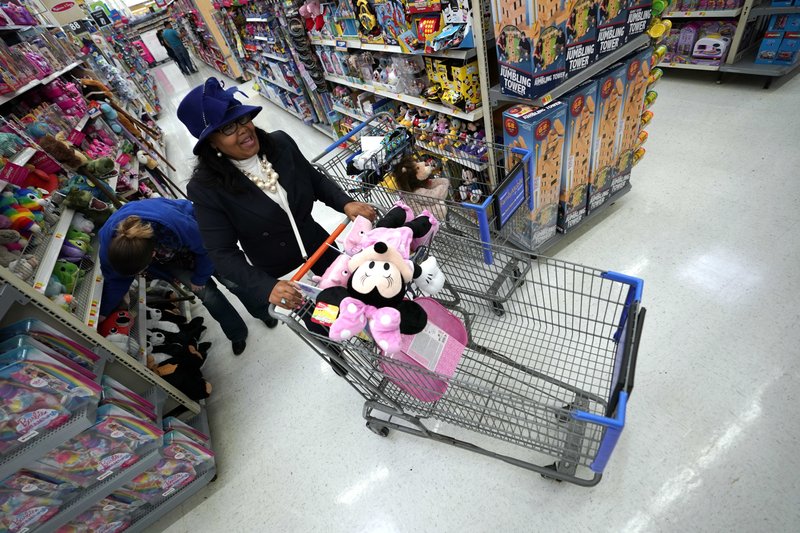 In this Nov. 9, 2019, file photo shoppers make their way through the toy isles at a Walmart Supercenter in Houston. (Photo: AP)

The National Retail Federation, the nation’s largest retail trade group, forecasts that holiday sales will rise between 3.8% and 4.2% even as uncertainty looms over an escalating trade war with China.

The holiday sales forecast, announced Thursday, marks an increase from the disappointing 2.1% growth seen in the November and December 2018 period that came well short of the group’s prediction. Last year’s holiday sales were hurt by turmoil over President Donald Trump’s trade policy with China and a delay in data collection by nearly a month because of a government shutdown. This year’s holiday forecast is above the average holiday sales growth of 3.7% over the previous five years.

The group expects online and other non-store sales, which are included in the total, to increase between 11% and 14%, for the holiday period.

The predictions come as the economy and the job market are still strong. But President Trump’s trade war with China could derail economic growth. In fact, US factory activity shrunk for the second straight month in September and reached a 10-year low, renewing fears of a recession and triggering a broad stock market drop.

“The US economy is continuing to grow and consumer spending is still the primary engine behind that growth,” said NRF President and CEO Matthew Shay. “Nonetheless, there has clearly been a slowdown brought on by considerable uncertainty around issues including trade, interest rates, global risk factors and political rhetoric.”

During a call with the media, Shay noted that shoppers are in good financial shape but consumer confidence could be eroded by any of these economic or political factors.

Until now, a large swath of consumer goods was largely spared from higher prices in Trump’s previous round of import taxes. That has changed. Starting Sept. 1, the US government began collecting 15% on $112 billion of a wide array of Chinese imported merchandise, including TVs and smart watches. Higher tariffs are set to hit another batch of Chinese products — $160 billion worth on Dec. 15.

Planned tariff increases on another $250 billion in Chinese imports would be delayed until Oct. 15 from Oct. 1. Tariff increases are set to go from 25% to 30%.

The NRF has been a powerful lobbying voice fighting back against adding more tariffs. The pushback from businesses prompted the Trump administration to delay adding tariffs on many holiday goods. Still, the China trade wars are on the minds of shoppers, which could impact their spending, the group said.

Nearly 80% of consumers surveyed for the NRF in September were concerned that prices could go up because of tariffs. Shay told reporters he hasn’t seen any evidence of widespread price increases so far as retailers have worked to absorb them, pass them on to suppliers or change their sourcing.

Analysts are also seeing the gap widen between retail winners and losers . Discount stores likes Walmart and Target and off-price chains like T.J. Maxx are responding faster to shoppers’ shift online with expanded deliveries and better discounts. But many mall-based clothing chains and department stores continue to suffer weak sales as they struggle to lure shoppers.

Given this environment, a string of retailers like Forever 21 , Barneys New York and Diesel USA have filed for bankruptcy protection so far this year as they battle online competitors like Amazon. Others like Payless ShoeSource and Charlotte Russe have shut down completely.

The numbers bear out the crisis facing traditional retailers. So far this year, US retailers have announced they will close 8,567 store closures and open 3,506 stores, according to the global research firm Coresight Research. That compares with 5,844 closures and 3,258 openings in all of 2018. Coresight estimates the store closures could number 12,000 by the end of 2019.

But the numbers don’t tell the whole story. The reality is the wave of store closures recently seen is being driven by a handful of companies, according to IHL, a global research firm. Just 16 retailers are responsible for 73% of retail store closings so far this year, IHL says. For every retailer closing stores, five retailers are opening stores, according to its measure.

The NRF forecast, which considers economic indicators such as consumer credit, disposable personal income and monthly retail sales, excludes sales from autos, gas, and restaurants. The forecasts are slightly below those of several other firms. Holiday retail sales are expected to rise 4.5 % to 5% according to Deloitte. Another forecast by AlixPartners predicts growth of 4.4% to 5.3%.

Still, coming up with a holiday sales figure is challenging.

“There are probably very few precedents for this uncertain macroeconomic environment,” said NRF chief economist Jack Kleinhenz. “There are many moving parts and lots of distractions that make predictions difficult.”