Natural gas cooperation accelerated under the Belt and Road Initiative

More natural gas import contracts have been signed or are likely to be signed over coming months between China and countries throughout the Belt and Road Initiative (BRI), as gas - one of the cleanest fossil fuels - acts as a bridge from using fossil energy to clean energy to reach carbon neutrality.

The latest example was two of the world's largest liquefied natural gas (LNG) modular facilities, which have set sail from Zhoushan, East China's Zhejiang Province on Thursday and will be delivered to Murmansk, Russia in 25 days, media reported.

LNG is natural gas that has been cooled to a liquid state at about -162 C for transport and storage.

In the future, 14 LNG modules, manufactured by six Chinese enterprises, will be assembled into the world's largest LNG production plant in Russia for the exploration and development of Arctic LNG, with a forecast annual production capacity of 6.6 million tons, media reported.

"For China, the development of the BRI natural gas projects can ease the domestic natural gas supply. At the same time, it is conducive to the diversification of overseas gas sources," Bai Wenxi, chief economist of IPG China, told the Global Times on Wednesday.

For countries along the Belt and Road, relevant projects can promote the development of natural gas resources, and promote the local social and economic development, Bai added.

China's natural gas consumption in the first half of this year reached 185.092 billion cubic meters, up 16.36 percent year-on-year, and is expected to reach 365 billion to 370 billion cubic meters in 2021, according to the Natural Gas Development Report released on Saturday by the National Energy Administration.

A ship carrying 65,000 tons of LNG from Papua New Guinea arrived at an LNG terminal in North China's Tianjin on Wednesday, marking 3.022 million tons of LNG delivered to the port this year, a historical high.

The terminal is operated by the China Oil and Gas Pipeline Network Corp (PipeChina), which is planning to build 17.6 kilometers of gas pipelines to boost connectivity across the integrated Beijing-Tianjin-Hebei region, media reported. 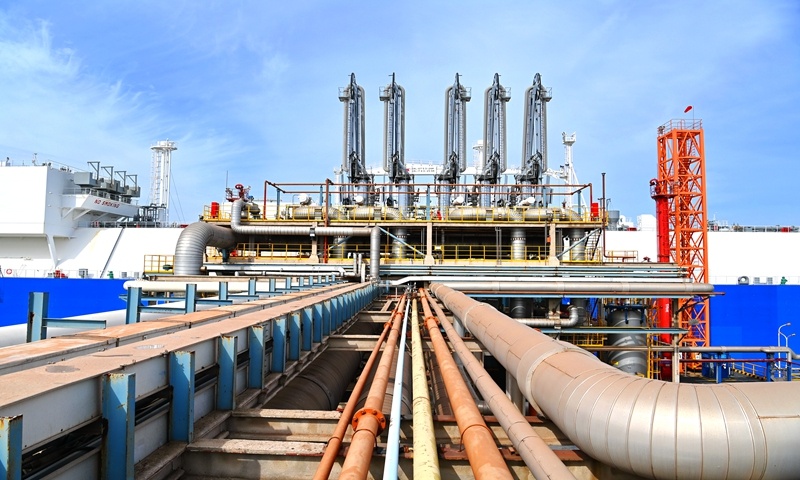 Meanwhile, in the year ended June 30, China became the largest buyer of Australia LNG for the first time. Shipments to China, which worth about $15.6 billion, totaled 30.7 million tons, up 7.3 percent year-on-year, according to report from consultancy EnergyQuest.

However, questions remains given Australia earlier canceled a BRI deal between Victoria and China, which the Chinese Embassy in Australia labeled "unreasonable and provocative", noting that the Chinese firmly opposed the move.

With the gradual upgrading of global energy transformation, the strategic position of natural gas resources is gradually rising, according to analysts.

As international natural gas prices continue to rise in 2021, it is important to diversify energy import sources and increase domestic supply, analysts said, noting that exploring other energy such as solar power and hydro power remain crucial components for China's energy security and reduction of carbon emissions.

Gas prices have risen sixfold in Asia over the past year. US gas price also reached its highest level in a decade.

"Strengthening natural gas cooperation with BRI countries can help accelerate the transition from using fossil energy to clean energy in China," Qiu Wenxu, director of Industry Development Department at the Alliance of Belt and Road Business Schools, told the Global Times on Thursday.

According to the International Energy Agency, total demand for natural gas in 2024 will increase by 350-430 billion cubic meters from 2020 levels.

By 2030, China's gas demand will reach 550-600 billion cubic meters. After that, it is estimated that natural gas consumption will reach a plateau around 2040, the National Gas Development Report noted.

Qiu also noted that China is now vigorously developing solar power, wind power and bio-energy to generate electricity as alternatives to fossil energy, so as to reduce the country's reliance on fossil fuels.