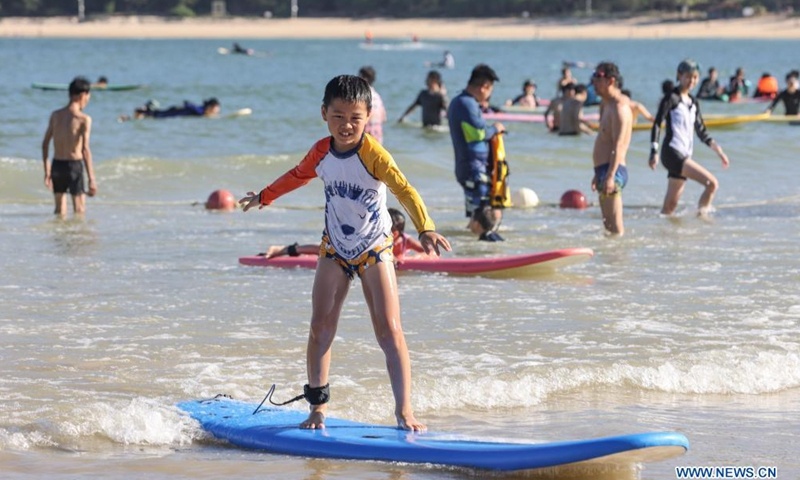 Experts said that implementation of the negative list showed China's move to implement the opening-up policies with a wider range and at a deeper level, while industry players anticipated a boost in business, as they will have more flexibility in operations under the negative list mechanism

The negative list outlines 70 special management measures in 11 categories for overseas services providers. For areas not included in the list, domestic and foreign companies shall have a level playing field and enjoy equal access in the Hainan free trade port.

The negative list also updates the management requirements for some specific industries, allowing overseas companies in those lines more leeway.

For example, overseas individuals are allowed to apply for opening securities or futures accounts in Hainan; overseas shipping examination companies are allowed to send staff to the Chinese mainland to carry out ship inspections even if they don't set up subsidiaries in the mainland, and restrictions are scrapped for overseas yachts to apply for pilotage that allows them to enter or leave Hainan.

These changes will make overseas companies more confident of expanding in Hainan, as they look for restrictions to be lifted further along with China's opening-up pace.

An employee from a Hong Kong-based yacht sales and charter company that has established a subsidiary in Sanya, Hainan, said that lifting restrictions on foreign yachts entering and leaving local ports will "definitely benefit" enterprises.

"As a result of policy easing, foreign yacht companies are willing to invest more resources and capital to attract foreign yachts and clients to Hainan," the person told the Global Times on Thursday, asking to remain anonymous.

According to her, foreign yachts in Hainan must now follow multiple restrictions, such as a limited number of people on board, while the sailing distance is also regulated.

"If restrictions like these are gradually lifted, more and more tourists and foreign yachts will be interested to come to Hainan," said the employee.

The government's efforts to open up Hainan's services sector after China's construction of the Hainan Free Trade Port, which saw favorable policies rolled out, attracted more companies to settle there. In the first half of this year, Hainan's 11 key industrial parks saw the establishment of 16,025 companies, up 266 percent on a yearly basis, according to a CCTV report.

Liang Haiming, dean of Hainan University's Belt and Road Research Institute, said that rolling out the negative list for the services sector, among other favorable policies, showed China is continuing to apply its opening-up policies to wider ranges and deeper levels.

He suggested that Hainan should first analyze potential overseas investors' attitudes and interest in investing in Hainan via high technologies like big data, before it rolls out more targeted policies to attract investment.

Dong Dengxin, director of the Finance and Securities Institute at Wuhan University of Science and Technology, also said that application of the negative list mechanism to Hainan creates ample innovative space for the local government by minimizing central government regulation.

"Judging by the negative list mechanism, China is molding Hainan into an experimental area for services sector reforms, with higher-level opening-up compared with other free trade zones in China," he said.