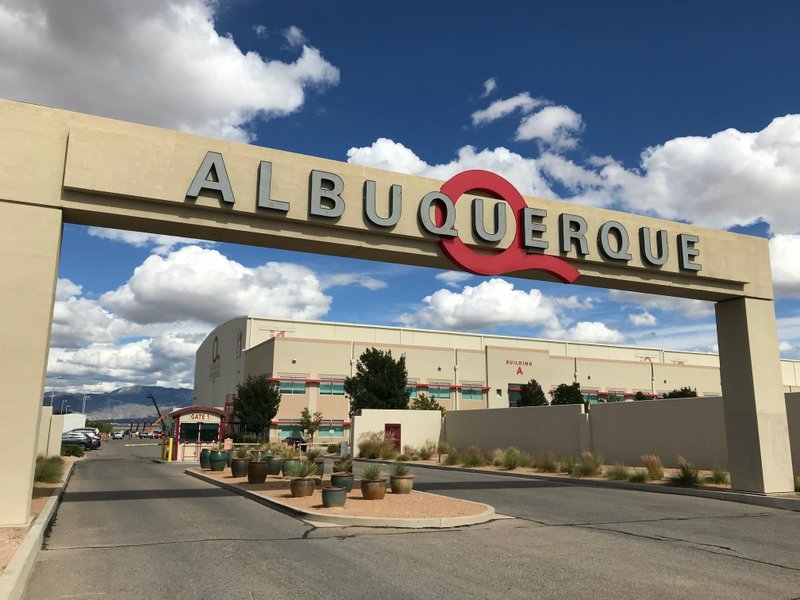 The entrance to ABQ Studios in Albuquerque, N.M., where Netflix announced at the studio complex that it chose Albuquerque as a new production hub. (File photo: AP)

An executive with Netflix says the streaming giant has boosted its original content exponentially over the last several years and that will mean more action for its production hub in New Mexico, where state officials have been busy trying to woo more big partners in the industry.

Nick Maniatis, who ran the state’s film office before going to work for Netflix, spoke to a group of hundreds of business leaders and elected officials who were gathered Thursday in Albuquerque. He described it as a “golden era,” saying the amount of content that’s out there is amazing.

“A year ago you could say all the major studios — take Disney, Warner Bros., Paramount, Fox, all of them combined — would do about 300 or 400 projects a year. This year, we will do 1,000 projects, just Netflix,” he said.

The pace of production is showing no signs of slowing down as Disney and others are planning new products. Maniatis said that will surely lead to a dearth of sound stages.

That’s where New Mexico is hoping to fill the void.

It’s already home to Netflix’s first US production hub. The company partnered with the state and the city of Albuquerque in purchasing a studio complex on the city’s southern edge, pledging to invest $1 billion in production in the state over the next decade. It has put more than $2 million into renovating the studios so far and its offices there are expected to be complete by the end of the month.

“We have a lot more to bring to New Mexico,” Maniastis said, teasing about some new developments. “I can’t really tell you about it other than to say we’re really pushing forward into the future with how production will be done. We’ve got some really innovate ways to do it and we’re going to do a lot of that here in New Mexico.”

The company also says it’s on track with meeting spending and employment benchmarks promised as part of the partnership with the state. Netflix and state officials are planning to announce the progress in the coming weeks.

NBC Universal is in midst of turning a warehouse near downtown Albuquerque into a state-of-the art television and film studio. It has committed to spending $500 million on productions in the state over the next decade.

Alicia J. Keyes, secretary of the New Mexico Economic Development Department, is just back from Los Angeles where she met with another company interested in coming to New Mexico. She said the state has shifted the conversation from one-off shows to partnerships with studios that can make long-term commitments to being in the state and keeping the established crew base working.

“Hollywood is finally like, ‘Wow, what’s going on here and how are they doing this?’ So we are on the map I think in a way that we never have been before,” she said Friday in an interview.

State officials tout changes in the film incentive program for the uptick in productions and interest over the past six months. Netflix is among those to benefit from the program, though Keyes said it will take some time for the state to calculate the total amount of incentives and the economic impact of the work done since the legislation took effect in July.

In all, there have been about 80 to 85 productions in 2019, according to the state film office.

The state is projecting direct spending by the industry of about $530 million for the current fiscal year.