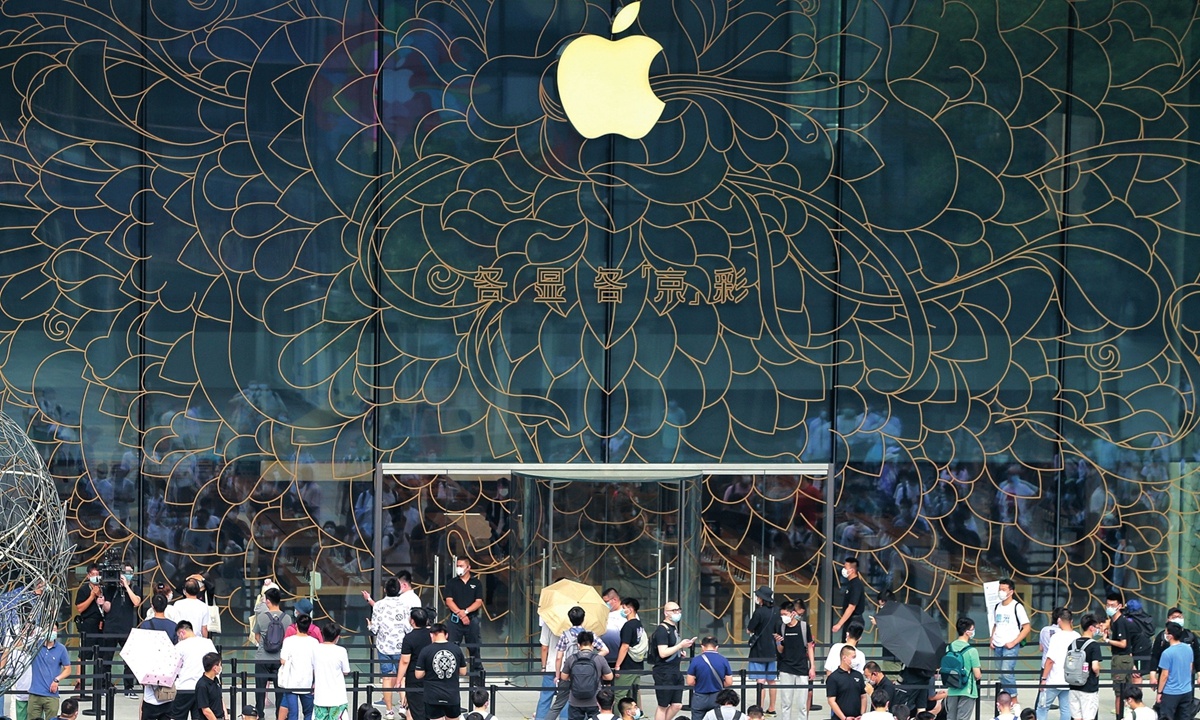 Apple's new 5G-enabled iPhone 12, which is equipped with a China-developed navigation system for the first time, raised heated discussion among Chinese users after the launch event on Wednesday against the backdrop of rising tension amid a China-US trade and technology war.

Some netizens voiced support for the US company's move to finally include the BeiDou system, which they see as an effort for the latecomer in the 5G era to win the Chinese market amid intensified competition with Chinese domestic rivals.

"China has a huge market. It is reasonable for foreign mobile brands to be successful by supporting BeiDou in the Chinese market," commented a netizen known as biewenwo.

"It seems Apple really couldn't wait to market its phone to Chinese users," commented another netizen.

"Supporting BeiDou is a general trend, just as Apple has finally come around to include 5G," said a Weibo user known as huangjiamiaomiao.

BeiDou is China's large space-based system. The other three global navigation networks are the US' GPS, Russia's GLONASS and the EU's Galileo.

It is natural for Apple to embrace BeiDou's excellent location and navigation capabilities, Ma Jihua, a veteran analyst in the high-tech sector, told the Global Times on Wednesday.

In terms of a marketing strategy, the inclusion of BeiDou will also help Apple gain more understanding and support from Chinese users, which is conducive to sales in the Chinese mainland market, Ma added.

"Given the rising tension between China and the US as well as the trade and technology wars, Apple's move to install BeiDou in its new iPhone could also be seen as a defensive measure to avoid being hit in the war," Ma said.

That said, it is unlikely for Apple to dominate and shape the 5G market as its unproven 5G performance is still a huge question in terms of its position among Chinese consumers.

"I have been waiting to change my 5-year-old iPhone 6 to the latest iPhone, and I'm looking forward to assessment of its 5G functions. However, I will postpone the decision for a while to see the market reaction to Apple's 5G performance," Wang Jia, a Shanghai resident, told the Global Times on Wednesday.

Compared with Android smartphones, which have enabled 5G networks for a year, Apple's release of 5G-enabled devices is lagging behind. Also, the launch came a month later than its normal time of September.

"Apple has always been a follower in the 5G era. It is difficult for Apple to catch up with companies like Huawei, which boast mature 5G technology," Xiang Ligang, director-general of the Beijing-based Information Consumption Alliance, told the Global Times on Wednesday.

He noted that it takes a long time for a 5G mobile phone to be tested, and find and solve problems during its operation on a commercial network.

The fact that the research and development of the iPhone is mainly done in the US and has not been tested by consumers on the existing commercial network in China is a disadvantage for the company, he said.