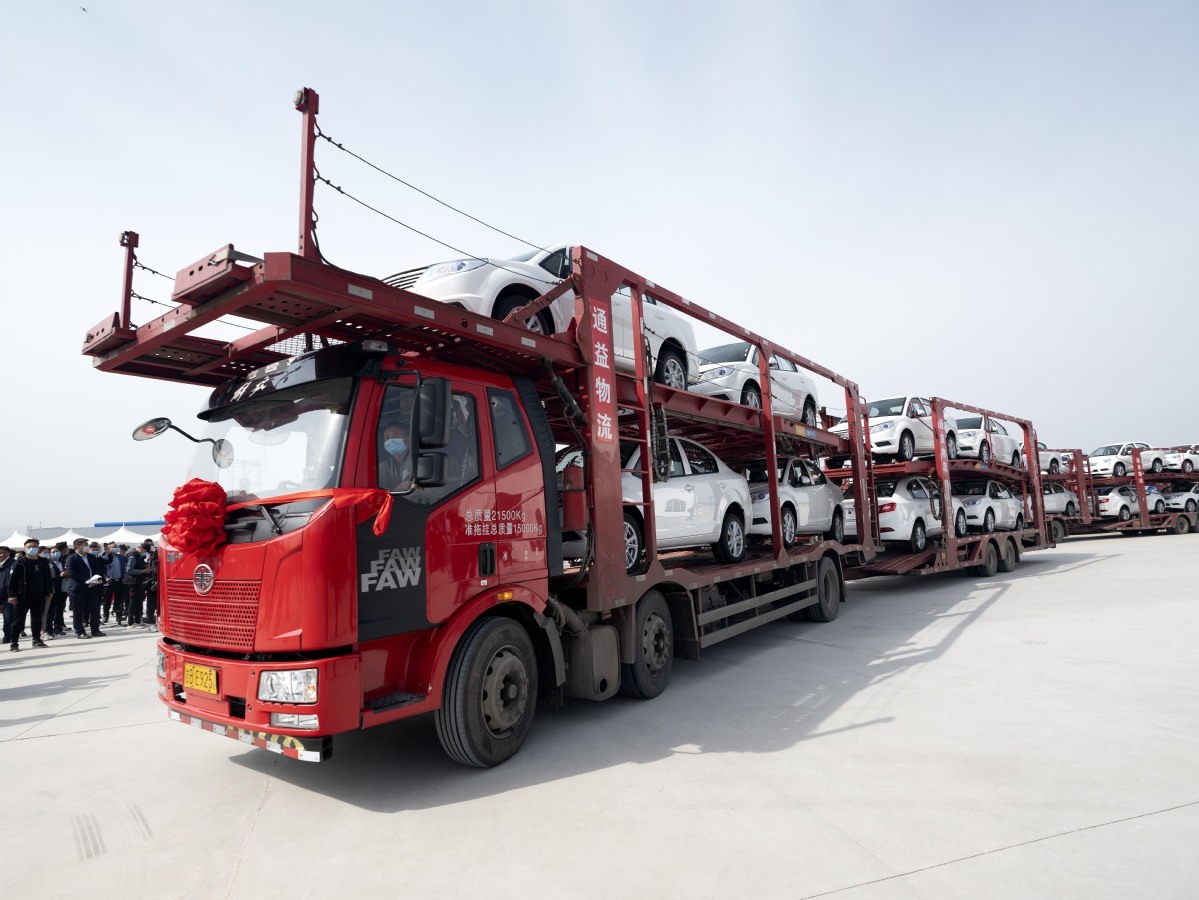 NEVs are loaded on trucks for export at a facility in Sanmenxia, Henan province. (Photo: Xinhua)

China's Ministry of Commerce has proposed to increase new energy vehicle exports to Russia to tap the fast-growing demand there supported by favorable policies.

Chinese makers may also seek cooperation on NEV infrastructure, including charging facilities, gas pipeline and power grid optimization, smart services and supplies in rural areas with Russian peers and government, said a report by the ministry.

"Currently, China's development of NEVs is on a fast track with products enjoying increasing recognition in the global market, especially those for agriculture logistics, mechanical equipment transportation, and short-distance travel (such as electric bicycles). There is market potential for Chinese NEV manufacturers to export products to Russia," said Zhou Mi, a senior researcher at the Chinese Academy of International Trade and Economic Cooperation in Beijing.

Data from the China Association of Automobile Manufacturers showed that in the first five months, China's production and sales of NEVs reached about 967,000 and 950,000 units, respectively, both increasing 220 percent year-on-year.

Lin Boqiang, head of the China Institute for Studies in Energy Policy at Xiamen University, also held positive views about China's NEV exports to Russia. "There is a growing need for NEVs in Russia, and China's NEV and electric bicycles are enjoying increasing popularity among consumers in the country thanks to advanced technologies and good product performance."

A report by news website jiemian.com said sales of electric vehicles－a major type of NEVs－surged sixfold year-on-year to 650 units in Russia in the first five months.

The market for natural gas vehicles, another type of NEV, is also growing rapidly in Russia. The ministry's report said annual growth of natural gas consumption for vehicles in Russia is more than 25 percent. The number of gas filling stations has increased from more than 200 in 2015 to about 500 at present, and gas consumption has increased from 400 million cubic meters to 950 million cubic meters in the same period.

A report by chinanews.com also said China's export of electric bicycles and motorcycles through Manzhouli highway port in the Inner Mongolia autonomous region surged 4,950 percent year-on-year to 6,314 units, worth about 9.57 million yuan ($1.48 million) in the first half of 2020.

"However, there are also challenges in exporting NEVs to Russia, as the country has abundant energy resources and fuel cars are still a major commuting tool. Chinese NEV manufacturers may step up efforts developing technologies to cut costs and get an advantage on pricing, as well as improving sales, maintenance and after-sale services," Zhou said.

"More importantly, Russia's cold temperatures can sap electric car batteries and reduce their range, which is an important reason that stops consumers from buying. Chinese NEV manufacturers may also need efforts on technology development to tackle the problem, in order to better promote NEVs in Russia," Zhou added.

At present, the total number of NEVs in Russia is still relatively small, taking up less than 10 percent of the total vehicle market in the country. As of 2020, there were about 6,300 EVs in the country and the market penetration rate was only 0.01 percent. Construction of EV infrastructure was still at an early stage, the ministry's report said.

In order to boost NEV consumption in Russia, the Russian government is rolling out more policy support. The report said the Russian government increased subsidies for NEV car purchases and modifications. Take the brand of Lada as an example. Consumers who purchase its NGVs can get subsidies worth about 10 percent of the retail price. For environmentally-friendly cars including NEVs, the rate can go up to 25 percent.

Meanwhile, the Russia government plans to raise the number of gas filling stations to 1,273 to bring convenience to NGV owners, and aims to produce 7,960 units of NGVs annually by 2024.

Last May, the Eurasian Economic Union, whose member countries include Russia and four other countries, announced it would implement zero tariffs on the import of purely electric vehicles. The implementation period of zero tariffs will last until the end of 2021.