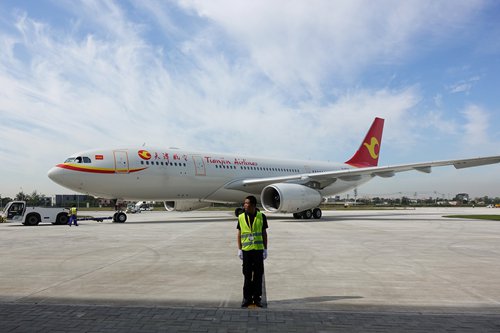 A staff member stands near the first Airbus A330 plane to be delivered from Airbus' Chinese completion plant to Tianjin Airlines on September 20, 2017. (Photo: VCG)

From subcontracting work packages to the China Aviation Industry Corp in the 1980s to becoming a highly localized aircraft manufacturer in China, Airbus has gone through tremendous changes over the past three decades.

In early 1985, Airbus began subcontracting work packages - mainly related to assembly work - to Chinese suppliers, but the raw materials were purchased from suppliers outside China, mainly in Europe and North America, said Albert Varenne, head of procurement of the company.

Now, almost all Airbus aircraft in the Chinese market, including the A320, A330 and A350XWB families, are equipped with components made in China.

Airbus' industrial cooperation with Chinese partners varies from raw material procurement and parts assembly, to design and manufacturing, and to final assembly.

"At first, most of our employees were recruited from Europe, who then passed on knowledge to Chinese workers. But we gradually spent more efforts fostering our local employees… Sending some Chinese employees to Europe to work there and get trained. Then they came back to China to take higher posts," Bertin said.

The latest example is Xu Gang, former Party chief of the Tianjin Youth League, who was appointed CEO of Airbus China in January 2018.

Xu is the first Chinese national to be CEO of Airbus China since it was established in 1994.

Xu Gang (Xu) also speaks with Global Times reporter Ma Jingjing (GT) about his experience in boosting a huge project starting in 2005 as well as Airbus' operations in the Chinese market.

GT: You began cooperating with Airbus in 2005, when you were involved in the first Airbus A320 Final Assembly Line (FAL) in China. What are the main difficulties that you faced in driving the implementation of the project?

Xu: You can imagine there were lots of challenges when launching such a big project in China. It was the first Airbus FAL outside Europe. How to find and train a qualified Chinese workforce was one of the key issues. Another challenge was how to ship oversized components over long distances to China on time and with quality.

Luckily, we got strong support from our Chinese partners: the Tianjin municipal government and the China Aviation Industry Corp. When foreign companies first enter a market with a different culture and language, it's not easy to do well without good Chinese partners.

GT: China has announced policies for a new round of opening-up. What opportunities do you see here?

Xu: Our team, including our headquarters, is now studying these policies. As aviation is an international industry, the new policies will facilitate not only cross-border technology and investment exchange, but also a breakthrough in developing China's aviation industry.

These policies have stimulated us to expand cooperation with Chinese companies at a higher level. Thus, we are now actively communicating with our suppliers, clients and even many emerging high-tech firms about deeper cooperation.

GT: What do you think about the development of China's aviation industry over the past 40 years?

Xu: After years of independent R&D as well as international cooperation, China's aviation sector has made great achievements in technology, quality and R&D. China is now the largest market of Airbus, and we have seen the biggest growth rate here. We deliver about one-fourth of our aircraft to the Chinese market every year. Looking forward, China has huge growth potential for its civil aviation market in the next decade.