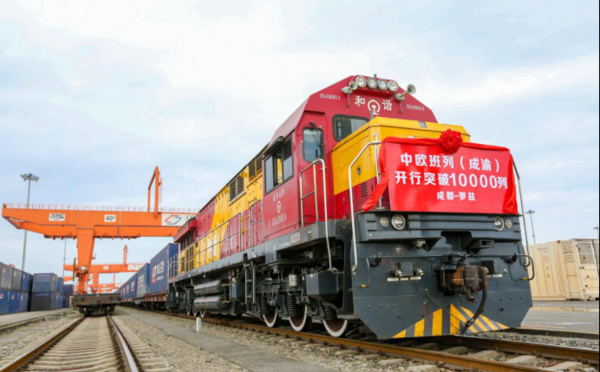 The postal service train will travel a total of 10,146 km and pass by Kazakhstan, Russia and Belarus before arriving at the terminal. It marks that a new cargo transport line has linked China and the Baltic Sea of Europe.

The train carrying 100 TEUs loaded with 353.77 tonnes of international mail from Shanghai and four provinces will leave China via the Horgos Port in northwest China's Xinjiang Uygur Autonomous Region.

After arrival, the international mail will be distributed to 36 European countries, including Spain, Denmark, Switzerland and France.

The opening of this China-Europe freight train service line has provided a new channel for the transportation of international mail amid the pandemic. In the future, it is expected to be operated at the frequency of one train per week.

The China-Europe freight train service has expanded rapidly since it was launched in the city of Yiwu, well-known for its trade of small commodities, in 2014. The service now has 12 routes linking Yiwu with 37 countries and regions across Eurasia.

Statistics show that as of Monday, a total of 133 China-Europe freight trains departed from Yiwu this year. The trains carried 11,220 TEUs, up 44.1 percent year on year.