BUSINESS New COVID-19 cases in Guangdong have no major impact on exporters: ministry

New COVID-19 cases in Guangdong have no major impact on exporters: ministry 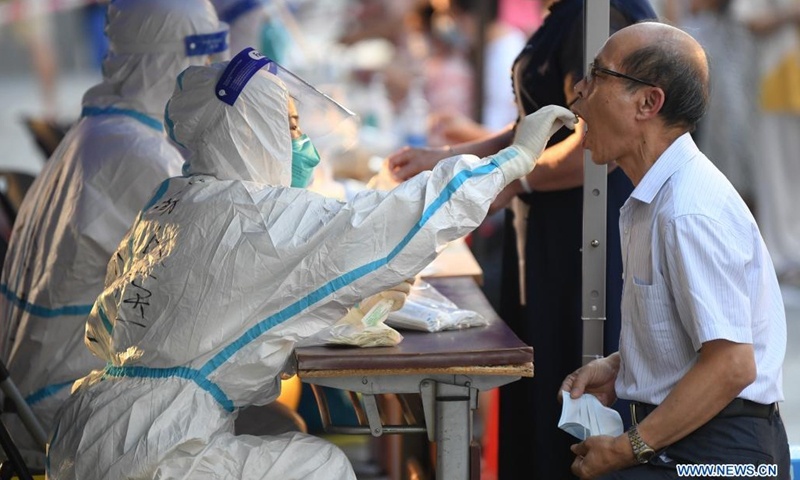 A medical worker collects a swab sample from a resident for COVID-19 nucleic acid testing in Liwan District of Guangzhou, south China's Guangdong Province, June 8, 2021. A new round of mass testing in high-risk areas of Baihedong Street and Zhongnan Street in Guangzhou started on Tuesday.(Photo: Xinhua)

The resurgence of COVID-19 cases in South China's Guangdong Province has not created any significant impact on the industrial and supply chain of local exporters, China's Ministry of Commerce (MOFCOM) said on Thursday, brushing off concerns over potential impact on China's top manufacturing and export base.

A survey of more than 2,000 export-oriented enterprises in Guangdong showed that over half of the surveyed firms reported a year-on-year increase in new orders, Gao Feng, a spokesperson for the MOFCOM, said at a regular press briefing.

Gao said that the MOFCOM will fully support the province in accommodating anti-epidemic efforts and the development of foreign trade.

Several exporters in Guangdong told the Global Times that factories have kept on operating as new COVID-19 infections are "limited" to only a few districts, though some expressed concerns over delays in shipment.

Duan Lianmin, a manager of a Shenzhen-based glass-making factory, told the Global Times on Thursday that overseas orders are flowing in as usual, and they have not felt any impact on either their exports or production. Her company mainly exports glass products to Southeast Asian countries such as Malaysia.

However, Duan said that she's concerned about "potential delays for shipment" due to stricter anti-epidemic measures imposed by local authorities.

"We were informed that some local port authorities in Yantian have been requiring truck drivers to provide nucleic acid test reports upon entrance," Duan said, adding that the Nansha port in Guangzhou, capital of Guangdong, reported serious delays and other obstacles in delivery.

Yantian and Nansha port are among the world's busiest container ports.

Lin Musong, general manager of Shenzhen Enle Industrial Co, which produces electronic components for US and European markets, also told the Global Times on Thursday that the company's operation has not been affected and the number of orders remained the same in May.

"Exporters and factories have gradually formed a relatively mature system which can strike a balance between resuming normal production and curbing emerging cases. That is a stark contrast to last year, when there were too many uncertainties and factories did not know how to handle such challenges," Bai Ming, deputy director of the international market research institute at the Chinese Academy of International Trade and Economic Cooperation, told the Global Times on Thursday.

Bai noted that apart from better management by companies, a lot of deals are actually made online and the goods are delivered via non-contact methods.