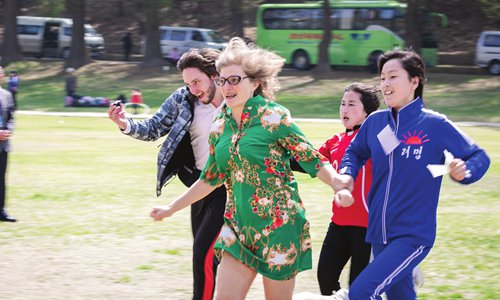 Foreign visitors and local residents play games at a garden party in Pyongyang in May. (Photo: Global Times)

In the spring of 2018, Duan Zhengli, a Chinese businessman who had made investments in Southeast Asian countries, sensed a new business opportunity in North Korea, as the country adopted a new strategy of concentrating all its efforts on constructing a socialist economy.

The initiative was proposed by North Korean leader Kim Jong-un at the Third Plenary Meeting of the Seventh Central Committee of the Workers' Party of Korea (WPK) held in Pyongyang on April 20, 2018. It marked the country's entry into a new development stage in terms of socialist construction, according to a report from the Korean Central News Agency (KCNA).

According to the report, the Hungarian Workers' Party said that the strategic line would help the Korean people further construct a socialist economy under the leadership of the WPK.

The front-page of Rodong Sinmun, the WPK's flagship newspaper, published a signed article by WPK Vice Chairman Pak Kwang Ho on April 22. In the article he said that the meeting on April 20 was a political turning point of great significance, in which all causes of the Party and country are mobilizing various resources including labor, material and technology focusing on socialist economy construction, now that the security of the country and the people has been guaranteed.

A year after the implementation of the new strategic line, a wave of changes is taking place in every corner of North Korea.

In light of these reports, Duan decided to try his hand on the other side of the Yalu River after having learned of the changes taking place in North Korea.

Duan contacted the business department of the North Korean Embassy to China via his friend, assuming it would be inflexible and unhelpful. To his surprise, the embassy was very enthusiastic about his idea of investing in the country.

Duan's application for a market investigation in the country was approved promptly, and he set off on a business trip to North Korea in the first half of 2018 with a couple of friends.

"Not only did we visit urban Pyongyang, but also many rural areas," Duan told the Global Times.

"Shopping malls are the most important indicator, and we observed the customer stream and consumer structures," said Duan.

He noted that "restaurants are the second indicator which shows a household's consuming ability, and we also visited public entertainment venues such as parks and playgrounds to check what people's daily lives are like there."

Duan said that he never thought that he would see such scenes of prosperity in the country.

"Of all the food markets in the countries that I have visited, North Korea has the cleanest and tidiest ones, with neatly dressed clerks. There are many imported fruits," Duan told the Global Times.

"It's not difficult to see that the Korean people are living rather good lives, as a lot of citizens go to the market to buy fruits," Duan said.

The Global Times reporter also witnessed a positive change that the new strategic line has brought to North Korea's economic and social development. Nowadays, construction sites can be seen everywhere along the streets of Pyongyang, and new buildings continue to spring up. New merchandise is appearing on store shelves, and people can be seen wearing brighter and more colorful clothes on the street.

There have been many reports of Kim making inspection tours to factories, construction sites, nursing homes and power plants since the new strategic line was implemented in 2018.

At the same time, a production promotion campaign was also launched in 2018, bringing positive results with economic construction booming in various industries.

In his 2019 New Year speech, Kim spoke highly of the new strategic line, saying that it has consolidated the foundation of the country's self-supporting economy.

Kim also praised the significant development of the country's heavy and light industries, including thermal power energy, manufacturing, coal mining, as well as the efforts and achievements in the country's agriculture and military industry sectors.

Kim also noted the importance of economic independence in his 2019 new year's address, and reiterated its importance at the first session of North Korea's 14th Supreme People's Assembly, which was held on Arpil 11, stating that North Korea's major task is to concentrate on economic construction, cement the material basis of the socialist system, and spare no efforts to enhance economic independence.

According to a series of reports by the KCNA in May, North Korea has made significant achievements in key industries, including road and bridge construction, power plant construction, coal mining and metallurgy.

The WPK and the North Korean government have taken a slew of measures to improve people's livelihood in both urban and rural areas.

After a year of renovation, a department store in Pyongyang reopened in April, becoming the biggest in eastern Pyongyang. Food, garments, furniture, apparatus and cosmetics are all available in the six-storey mall.

The Global Times reporter saw many consumers at the department store.

At the end of May, the 22nd Pyongyang Spring International Trade Fair was held with the participation of more than 450 companies from countries including China, Russia, Pakistan and Poland.

A Chinese businessman told the Global Times at the trade fair that this year's exhibition was the largest compared with previous years, adding that all the stalls had been reserved, and many had to be set up outside the hall.

All kinds of electronic products, food and items closely related to people's daily life were exhibited at the trade fair.

Following his investigation, Duan decided to invest in household appliances in North Korea.

"Although the country has a comparatively small demand for high-end office machines, the Korean people's demand for household appliances is increasing," Duan told the Global Times.

"The North Korean economy and consuming potential is growing day by day, and the people have an increasingly strong desire to improve their daily lives."