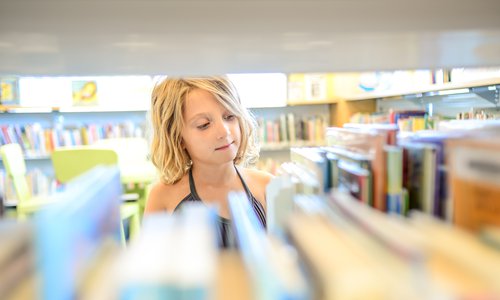 Jamie Fiocco, owner of Flyleaf Books, a bookstore in the US state of North Carolina, said that she has been running the bookstore for 10 years and every year has been the best ever. But she could only hope for the best this year.

It's "disappointing" that books, which were traditionally exempted from tariffs, are included in the US government's new tariff list of Chinese imports, said Fiocco, who is also the president of the American Booksellers Association, which represents some 2,000 independent brick-and-mortar booksellers across the country.

What concerns booksellers, publishers and readers most is the tariffs on children's book, even though they are delayed until mid-December. Independent bookstores, often with tight profit margins, might have to suffer financially, and children, in the more pessimistic scenario, could have fewer books to read.

Fiocco's 15-person bookstore is located in Chapel Hill, North Carolina, with a vibrant, diverse children's book section. A blue bean bag sofa with a few toys makes it attractive for kids, who can sit comfortably with their parents to read books.

After randomly checking out a dozen children's books, a simple conclusion was made: the majority of them came from China. "Manufactured in China" and "Printed in China" are repeatedly seen on the back of the books, in some cases with detailed locations such as "Printed in Foshan, South China's Guangdong Province."

While not knowing the overall market share, Fiocco pointed out that some of the children's books made from special materials are exclusively produced in China, such as those called "indestructibles," which are "chew proof, rip proof, nontoxic and 100 percent washable," as stated by publishers.

There has been a trend for printers in China to do four-color printing, a method used to print full-color images, "very well cheaply and quickly," according to Fiocco.

At a public hearing about the tariff hike on$300 billion worth of Chinese products in June, M. Luisa Simpson, vice president for global policy at the Association of American Publishers, said that the capacity of US printers has become extremely limited since the 1980s when the industry began moving out of the country.

Daniel Reynolds, CEO of Workman Publishing, said in his testimony that the majority of the books with colored illustrations are predominately printed in China.

"There is no other viable alternative," Reynolds said. "Any shift to alternative sources, if they're even available, will almost certainly bring a decline in quality."

'No margin to absorb'

The US government has recently announced it would impose additional tariffs on $300 billion worth of Chinese imports, covering clothing, shoes, toys, TVs, cell phones, laptop computers, among other consumer goods.

The extra tariffs, which took effect on September 1 on the first batch of these Chinese imports at 15 percent, have drawn strong backlash from numerous US industry associations, and also prompted Chinese retaliation.

Fiocco said tariffs on black-and-white books, as well as some colored books such as cooking books and travel books, are effective from September 1, and tariffs on children's books are delayed until December 15. Partial postponement of the tariffs, however, would not eliminate the impact for independent stores, which usually have fewer resources compared with big bookstore chains.

"The tariffs for at least children's books will not come into effect until December 15 with the idea that retailers can stock up. Well, I can assure you that most of the space that we pay rent on is for the front of [the] store. So, there's not a lot of storage space," Fiocco said, adding that independent booksellers like her are often working on low cash flow.

Noting that over a third of their business is done during the holiday season, which runs from late November to the end of December, Fiocco said, "we'll buy as many as we can before December 15 and hope that it's enough."

Fiocco said that historically, margins for independent bookstores are "very tight," and the most profitable bookstores are usually 8 percent profitable. "If the publishers decide to pass the price along to us, we'll have to do the same (to consumers). So, the prices will go up, which no one wants, but that's a reality," she said.

"It's just not possible to absorb an additional 15 percent," she said.

Others in the industry share Fiocco's worry. Bradley Graham, co-owner of Politics and Prose, a 35-year-old famous bookstore in Washington D.C., said that in the wake of the tariffs, chances are that publishers will be prompted to raise the prices of books, which "would be very hurtful to our sales."

Graham said there's been a net increase in the number of independent bookstores in recent years, in what he calls "a bit of an upturn," following a sharp decline since the 1990s.

He attributed the robust growth of independent bookstores in the country to "a commitment by many customers to buy local" and "a leveling off in the popularity of ebooks."

"That said, it's still a very challenging business. Our profit margins are still very narrow. The revenues have been going up in many cases, but so have the expenses, particularly payroll and rent," he said. "So, there isn't a lot of room for error."

Graham said he is "quite concerned" about the prospect of tariffs on books, which would go against the past US policy that tended not to levy tariffs on books because of their importance to the culture.

"Imposition of tariffs ... would prompt the rise in book prices and that would discourage some people from buying books," he said. "I think that would be damaging to our culture."

After carefully selecting three books for her neighbors' grandchildren, 70-year-old Billie, who only gave her first name, said that she is "angry" about the US government's new tariffs on books, particularly children's books.

Billie, a longtime customer of Fiocco's bookstore, said if the prices increase, children would probably have fewer books of their own, and that could deprive them of the opportunities to better develop their reading skills.

"Our daughter used to almost memorize them because you read them so many times," she said.

"So, it's really good for teaching them how to read," she added.

Echoing Billie, Fiocco said it's disturbing if children aren't allowed access to books as a result of tariffs and that this would disproportionately impact low-income families.

Fiocco said she works with several organizations that distribute free books to low-income families, whose priorities are not reading materials for their children.

"I know for a fact that those budgets will be directly impacted. I don't see how they're going to buy as many books this year if the prices go up," she said.

"It's troubling because you definitely want kids to grow up with books," Fiocco said.