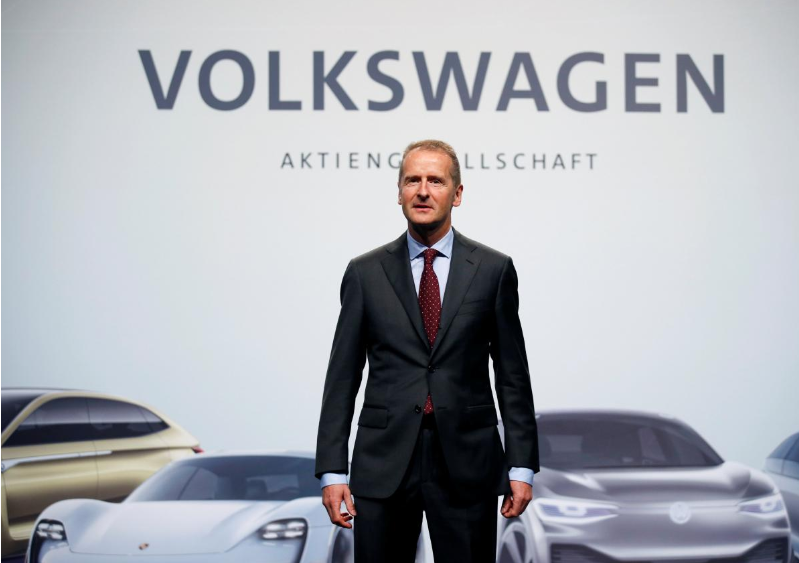 Volkswagen’s (VOWG_p.DE) new chief executive on Thursday vowed to make the carmaker “more honest” as it fights to recover from 2015’s diesel emissions scandal, but its wary investors called for outside vetting of steps to restore its reputation.

Europe’s largest automaker will expand its internal whistleblower system and beef up compliance to prevent the misconduct that triggered the scandal, CEO Herbert Diess said.

“Volkswagen has to become more honest, more open, more truthful,” Diess said at VW’s annual shareholder meeting. Preventing future malfeasance “is the top priority for my colleagues on the (management) board and for me personally.”

Former chief executive Matthias Mueller, who was ousted last month by the carmaker’s major shareholders, has said getting mid-level managers to adapt to the carmaker’s post-dieselgate drive to improve accountability was more difficult than thought.

“We have too long underestimated the value of a more open corporate culture that does not repress dissent but instead rewards it,” Diess said.

Beyond a new code of conduct for employees and tighter rules for vehicle engineers, there has been “little tangible progress (at VW) that credibly shows to investors that changes to the corporate culture are advancing,” Michael Viehs of investment advisory firm Hermes EOS said.

“We therefore urgently recommend the supervisory board to carry out an independent assessment of corporate culture.”

“While the management board is getting the operating business back on course for the future, the company’s corporate governance remains in the stone age. We still believe that a genuinely new start also requires a really independent supervisory board chairman.”

Separately, Diess said VW had so far picked partners to provide battery cells and related technology worth around 40 billion euros ($48 billion) for its electric-car program, four-fifths of the planned volume of 50 billion euros.

The battery technology will be destined for Europe and China where VW sells 80 percent of its vehicles, while a supplier for North America has yet to be chosen, a source close to VW said.

VW’s huge battery buy contrasts with U.S. electric-car pioneer Tesla’s (TSLA.O) struggle to convince investors it has enough cash to go the distance. Tesla on Wednesday posted its biggest-ever quarterly loss as it grappled with production issues on its Model 3 sedan.

Diess on Thursday renewed his call on the industry to step up talks about jointly making battery cells in Europe as peers are pushing their electric-vehicle lineups.

VW is still looking at whether to spin off assets such as motorcycle maker Ducati and transmissions maker Renk, Diess said, as the autos group strives to streamline its operations and become more efficient.

Under former CEO Matthias Mueller, attempts to slim down the group by selling Ducati and Renk floundered amid opposition from labor leaders and the controlling Porsche and Piech families.

“For non-core businesses such as Ducati, Renk and (large engines unit) MAN Diesel & Turbo, we will draw up sustainable future plans,” Diess said.

The deliberations could lead to expanding those businesses and developing growth strategies, but spin-offs “are also conceivable”, he added.

Since the former BMW (BMWG.DE) executive took office on April 12, Volkswagen (VW) has announced steps to prepare its truck operations for a possible stock market listing and to reorganise its multiple car brands in an effort to boost synergies.