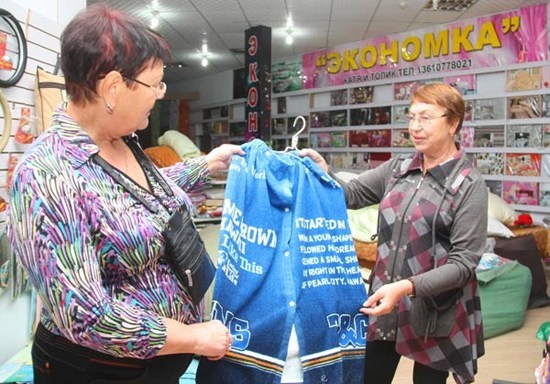 A woman (right) talks with a Russian shopper at the "Female Housekeeper" retail center in Hunchun, Jilin province. (Photo: For China Daily)

CHANGCHUN - Hunchun, a border city in Northeast China's Jilin province, has risen into a prevalent destination for Russians to count down to the New Year in recent times.

It was in this city that Irina from Vladivostok, once again, celebrated New Year's Eve with her friends this year.

Irina could not recall how many times she had come to Hunchun. "Almost everyone in my hometown knows Hunchun," she said. "The transportation here is convenient, the service is good, the price is reasonable, and the people are friendly and welcoming."

Statistics from the local customs authority showed nearly 10,000 Russian tourists chose to celebrate the New Year of 2020 in this small city of 228,000 people, bringing in tourism revenue of nearly 20 million yuan ($2.9 million).

Zhang Guangqiang, general manager of a local travel agency, said his company received 2,200 Russian tourists who came for the New Year. "Russians love Chinese food and traditional Chinese massages. They are also fond of skiing and hot springs. The number of Russian tourists is increasing year by year," said Zhang.

Rooms of the TX International Hotel in downtown Hunchun were almost fully booked around the New Year. "Most of the rooms were booked by Russian tour groups as early as two months ago," said Yu Yangyang, deputy general manager of the hotel.

In addition to relaxing and enjoying delicacies, Russian tourists are also keen to purchase souvenirs. Many of the salespersons in Hunchun's shopping malls can speak basic Russian.

"Chinese goods are good and cheap, and many residents from Russia's Far East region often come to Hunchun for shopping," said Svetlana, a Russian tourist. Buying New Year's gifts was a big part of her trip, she said, as she showed off shoes for her husband, perfume for herself and toys for her children.

The rapid rise of cross-border e-commerce in Hunchun has given Russian consumers more choice and convenience in buying New Year gifts. According to Li Guibo, deputy director of the administration of the Hunchun export processing zone, Russian consumers placed 150,000 orders in Hunchun through e-commerce channels in 2019, worth 600 million yuan, an increase of nearly 20 times compared with 2018.

In recent years, with the opening of high-speed railways and the improvement of road infrastructure, Hunchun, China's only city on the border between China, Russia and the Democratic People's Republic of Korea, has gradually become a transfer hub for inbound tourists.

More Russians are opting for "in-depth tours" in Jilin via Hunchun rather than just spending a short holiday across the border. As Jilin's only port city to Russia, Hunchun has established friendly and cooperative relations with several Russian cities and the Sakhalin Oblast, which have greatly promoted bilateral exchanges and the development of the local tourism industry.