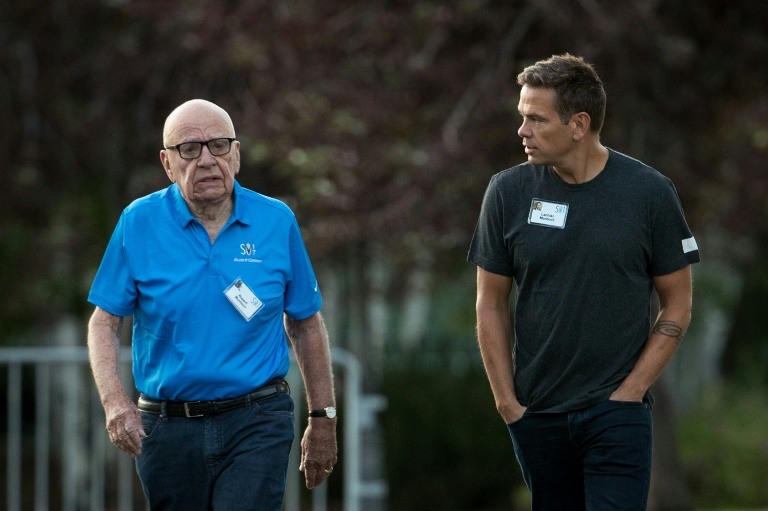 Rupert Murdoch and son Lachlan Murdoch, seen at a conference in 2017, share the title of executive chairman at News Corp, the newspaper-focus unit in the family's media empire.(Photo: Getty/AFP)

Rupert Murdoch's newspaper-focused News Corp on Thursday reported a loss in the past quarter, as results were hit by a writedown in the value of its Australian television operations and declines in print advertising revenues.

The New York-based media group said the loss in the quarter ended March 31 was $1.1 billion, mainly from a markdown in value of Foxtel and Fox Sports Australia.

The newspaper operations -- which include The Wall Street Journal, The Times and The Sunday Times of London as well as Australian titles -- saw mixed results.

Revenue for the newspaper unit grew two percent, helped by circulation and subscription gains at The Wall Street Journal. But ad revenues were down three percent, reflecting weakness in the print advertising market, notably in the US and Australia.

"At our mastheads, digital audience expanded at a time when premium news has become more important to readers and advertisers," chief executive Robert Thomson said.

"The digital ecosystem is clearly evolving and regulators in many countries are grappling with the profound impact of unprecedentedly powerful digital platforms."

The CEO has long been a vocal critic of platforms such as Google and Facebook over their growing roles in the news business.

Thomson called for an "algorithm review board" to oversee digital platforms to "ensure that there is no algorithmic abuse or censorship, commercially or politically."

The company -- which Murdoch split off from his media-entertainment group in 2013 -- includes the HarperCollins book publishing group, online services including the realtor.com website, television and publishing operations in Australia, The Wall Street Journal's parent Dow Jones and News UK titles in Britain.

Murdoch, 87, retains the title of executive chairman with his son Lachlan. The two hold the same roles at 21st Century Fox, the part of the family empire which includes major television and film properties.

News Corp shares fell slightly on the results, which were mostly in line with expectations.