BUSINESS Next bear market for US stocks will be ‘the worst market in my life’: Jim Rogers

Next bear market for US stocks will be ‘the worst market in my life’: Jim Rogers 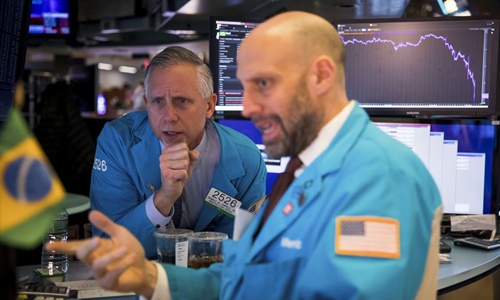 During the outbreak of the global pandemic that has rattled global investors, China's stock market has "done less badly" than other markets, including the US one, as Beijing has "done a better job" of stabilizing the capital market and not printing a "staggering amount of money" like Washington, which could only make things worse, Jim Rogers, renowned investor and chairman of Rogers Holdings, told the Global Times.

"China has kept interest rates sound so far, while the US has done the opposite. Likewise, China has spent a lot to help things, but has been much sounder so far than the US which is going to spend insanely huge amounts," Rogers said.

The US market posted mixed performance on Wednesday. The Dow Jones Industrial Average surged 2.39 percent. The S&P 500 also rose, by 1.15 percent. But the tech-heavy NASDAQ Composite fell by 0.45 percent. Over the past 10 days, the key circuit breaker was triggered on the US stock market four times.

Rogers noted that there will be rallies especially as the US government gets more desperate to prop things up. But all the ever-more artificial boosts will just make things worse in the end.

On Wednesday, the White House and Senate leaders reached a deal on a massive economic relief package worth more than $1.8 trillion for the US economy. It is the biggest bailout in US history.

"[US policymakers] are ensuring the next bear market for US stocks will be the worst market in my life," Rogers said. He indicated that because of how China and the US tackled the virus, the economic role played by the two countries in the world will undergo a shift.

Rogers also predicted that it will take longer than expected for the world to end the turbulence in capital markets, due to incredibly high debt and huge excesses of capital.

A total of 67 new COVID-19 cases were reported in the Chinese mainland on Wednesday, all imported cases. The number of COVID-19 cases in the US was 65,285 as of 7:00 pm (US time) on Wednesday, with 926 deaths, according to the Center for Systems Science and Engineering at Johns Hopkins University.

Rogers said that the US government had done too little to curb the pandemic. "What little there is, is too little too late."

"The US has not been prepared and has not acted quickly and well. The world has known about the virus for over three months yet the US could not even test one million last week," Rogers said.

This is a stark contrast to China, which has brought the virus under control within three months and is now helping other countries, while the US cannot solve its own situation, he added.