Since August, Chinese consumers' enthusiasm to venture out at night has risen along with the daytime temperatures. 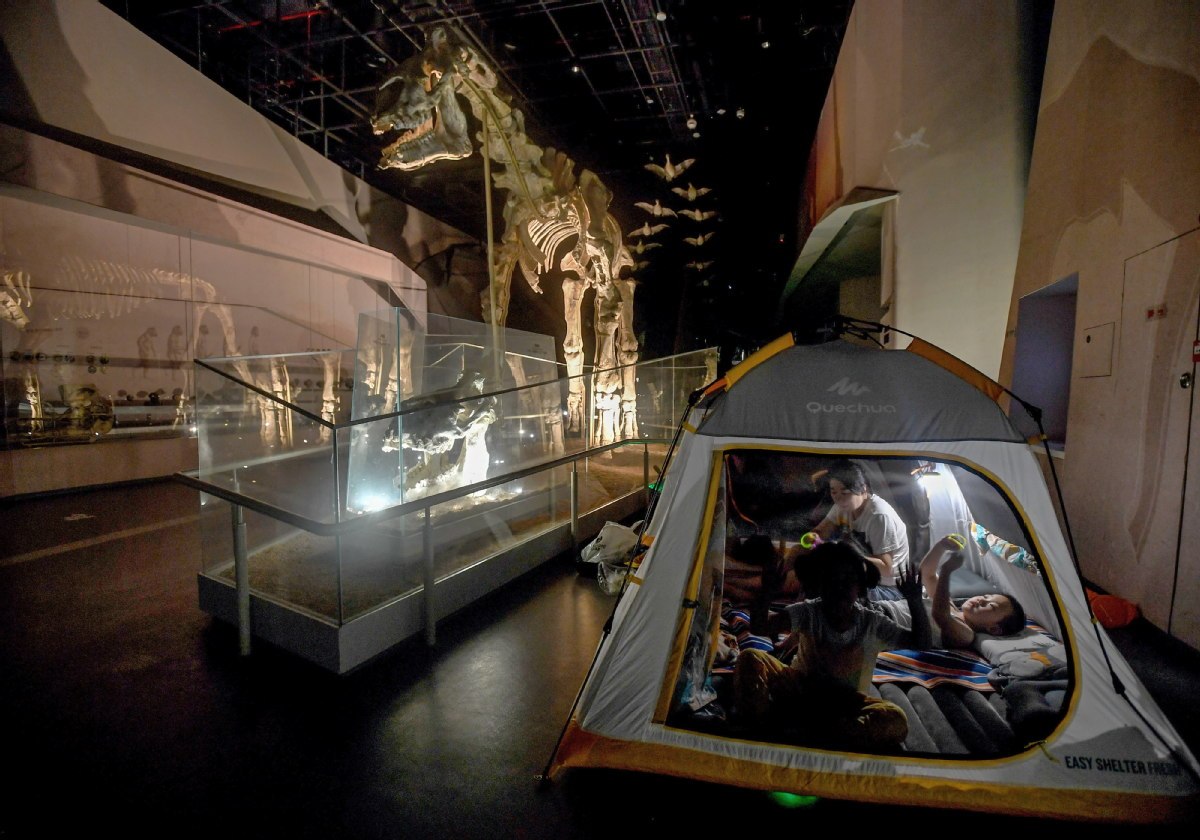 Children and parents inside a tent at the Wuhan Natural History Museum in Wuhan, Hubei province, on Aug 15. [Photo by Shi Wei/For China Daily]

This summer, the number of available nighttime travel products on Fliggy, the online travel arm of Alibaba Group, jumped 20 percent on a yearly basis. The main consumers of night tour products are those born in the 1990s, and they accounted for more than 50 percent of the total, Fliggy said.

"The liveliness of the night economy is an important measure of urban vitality. The offering of nighttime events and travel products meets demand from young consumers who take tours locally and in neighboring areas. They will help boost the recovery of urban culture and tourism since the outbreak of COVID-19," said Cui Yupeng, deputy general manager of the vacation department at Fliggy.

With more people preferring to take weekend trips locally and to nearby regions, this has fueled the popularity of nighttime events at bed-and-breakfast homestays and resorts.

Some luxury hotels, such as Marriott Group, Shangri-La Hotels and Resorts and Bellagio Shanghai, have launched nighttime activities such as parties, drink-one's-fill at bars and workout events to satisfy the entertainment demand of urbanites after the sun goes down.

In addition to major cities such as Beijing, Shanghai, Guangzhou and Shenzhen in Guangdong province, some other cities such as Huzhou, Hangzhou, Chongqing, Jiangsu province's Nanjing and Sichuan province's Chengdu are also quite popular destinations with their nighttime travels.

For the tourism industry, the introduction of more nighttime travel and leisure products can help transform and enrich travel lineup offerings, increase value-added services and boost other related sectors.

"Short-distance excursions are more dependent on the opening hours of certain scenic spots. It would be helpful if the government could issue more favorable policies, such as allowing the extension of opening hours, as well as strengthening the building of security and public transportation facilities and infrastructure," said Gou Zhipeng, president of Qunar.

"Developing nighttime urban tourism will also help drive the business growth of restaurants, transportation and shopping areas that are near the sightseeing spots,"Gou said.