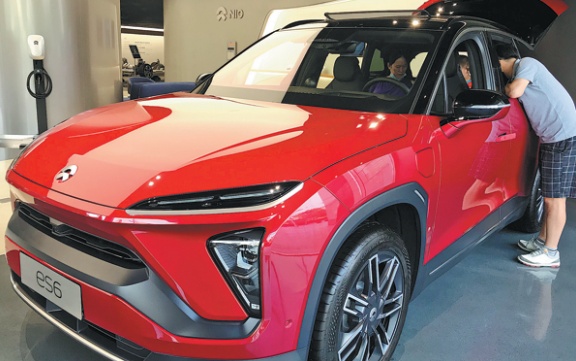 People check a Nio ES6 SUV at a showroom in Beijing. [Photo by Li Fusheng/China Daily]

Li was not summarizing his romantic life, although Nio showrooms have become popular marriage proposal sites for its fans. He was unveiling the company's battery swap initiative, called BaaS, or battery as a service.

BaaS enables people to buy an electric car without buying its battery pack. Car owners pay monthly rental fees for their use, and they can even choose battery packs of different capacities if they want.

"To offer customers more choice is always something good. And charging and battery swap do not contradict each other. Our goal is that customers can charge the cars, swap and upgrade their batteries."

Nio started offering a battery swap service since 2018 through a financial program. Different from BaaS, car owners must pay for the battery packs as well.

"Buying a vehicle without buying the battery is what the electric car sector should be like," said Li.

Li said the idea of battery swap first emerged in 2012 when he did a survey at Biauto, a Chinese car comparison website he founded, about electric cars.

The survey of 64,000 respondents showed that almost half of them were worried about inconvenient charging, and over 30 percent said the battery cost would be exorbitant.

"So since we founded Nio in 2015, everything we do, including our chassis design, centers around battery swap. And finally, eight years later, it has become a reality," Li said.

What excites Li is that BaaS solves such concerns as battery cost, the vehicle's residual value and inconvenient charging.

The battery pack is the most expensive component of an electric car, accounting for around half of a car's total cost. Baas slashes electric cars' price tags by up to almost 20 percent and is thus expected to make them more competitive compared with gasoline cars.

In terms of charging, not every one in big cities can have a private charging pole.

And for those who do, it usually takes hours to get a vehicle fully charged. Battery swap, in comparison, takes minutes.

Li said a station the size of three parking spaces can offer batteries for 96 vehicles a day. He said the company is working on second generation stations, which will be able to serve 400 vehicles per day.

So far Nio has 143 battery swapping stations in 64 cities around China, with it taking three minutes to swap a spent battery pack for a fully charged one.

Li said Nio is on average building a station a week and plans to build 300 new stations in 2021.

Frank Schlenstedt, a technology chief at an automation company in Suzhou, Jiangsu province, has been using his Nio ES8 SUV mainly via battery swap.

He has completed lengthy trips from Suzhou to Beijing, Harbin in Northeast China's Heilongjiang province and Shenzhen in South China's Shenzhen province.

Schlenstedt said battery swap is one of the reasons that he decided on the startup's vehicle, because it represents innovation.

"Battery swap is not a new concept, but Nio is the first to make it a reality," he said.

The concept-to-reality process took five years. "You could not sell electric cars without batteries until very recently, and you had many government departments to convince," said Li.

Li said in addition to "patient communications" with them, over 1,200 patents Nio has developed and more than 800,000 swaps done over the years helped to persuade them.

"I was moved when a senior government official said 'There must be something real about battery swap if so many people like it'," said Li.

China has led the world in new energy sales in the past five years, and has built 38,000 charging stations, 449 battery swap stations and 1.3 million charging poles, according to data from the Ministry of Industry and Information.

Xin Guobin, vice-minister of industry and information, told a news conference in July that battery swapping will be further promoted.

The technology will help extend the life of batteries, enhance safety and lower costs for buyers, Xin said, adding that enterprises will be encouraged to develop new battery charging and swapping technologies.