Some Japanese are using an old expression to describe how Nissan was left out of talks that led to the proposed merger between its French alliance partner Renault and Fiat Chrysler Automobiles: "kaya no soto." 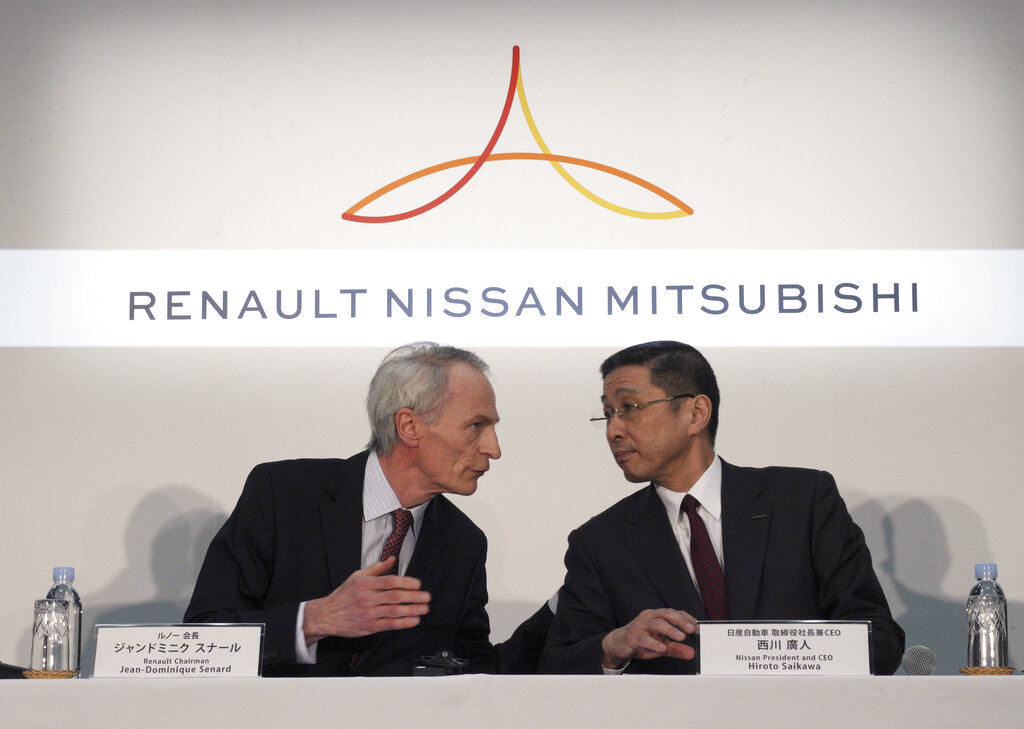 In this March 12, 2019, photo, Renault Chairman Jean-Dominique Senard, left, and Nissan CEO Hiroto Saikawa speak at the start of a joint press conference following a board meeting at the Nissan headquarters in Yokohama, near Tokyo. (Photo: AP)

That translates to "outside the mosquito net," or the unlucky person outside the net, getting bitten while others are safe inside. In other words, the odd man out.

Renault's board is set to meet Tuesday to vote on the proposal. Even if the board greenlights merger negotiations, the process of consultations with unions, the French government, antitrust regulators and others is likely take about a year.

In any case, Nissan seemingly has no say.

The Yokohama-based automaker is 43% owned by Renault and holds 15% of its French partner. It has no option but to go along, at least for now.

Nissan's position has weakened following the November arrest for alleged financial misconduct of its former chairman, Carlos Ghosn. The star executive was credited with leading Renault's rescue of Nissan from near bankruptcy 20 years ago.

In recent years, until 2018, Nissan had been more profitable than Renault, with a solid reputation for quality and innovation and strong model lineup that includes the March subcompact, Leaf electric car and Infiniti luxury models.

Partnering with what could be a behemoth Renault-Fiat Chrysler would bring merits of scale, the cost savings that come from sharing platforms, components and research costs at a time when all the world's automakers are rushing to develop energy-efficient and autonomous-driving technology.

But analysts warn such size would pose nightmares for coordination and decision-making. Nissan might also simply be dwarfed by its alliance partners.

"There is risk that Nissan will not be able to maintain its independence, its own brand power," said Tatsuo Yoshida, senior analyst at Sawakami Asset Management in Tokyo. "It's like the saying: Too many cooks spoil the broth."

Reflecting widespread opinion, Yoshida said Nissan can't afford to break with Renault: after two decades together, the automakers — and smaller alliance partner Mitsubishi Motors Corp. — share too many operations and products. Breaking free would take at least several years, spanning the product cycle of a vehicle, the time it takes from the design stage to the next model change.

"They're already at the point of no return, like a couple that simply cannot get a divorce this late in the game," he added.

In the intensely competitive auto world, going it alone would be perilous for Nissan, or any automaker, though there are a few exceptions, such as Japanese rival Honda Motor Co.

Despite longtime speculation about a full merger with Renault, Nissan has resisted. Should Renault merge with FCA, which combined the American and Italian automakers, the partnership will become still more unbalanced.

In theory, Nissan models and Chrysler models don't overlap in the US market, so there might be ways they could complement each other. But it's unclear whether the companies will want such a partnership.

In the meantime, Nissan is grappling with problems of its own.

Ghosn's arrest has tarnished Nissan's reputation and left it with something of a leadership vacuum, given his vast influence over the company before prosecutors arrested him on charges of under-reporting compensation and breach of trust.

Ghosn insists he is innocent but his trial has yet to start and is likely to take months. Nissan's current leadership, headed by CEO Hiroto Saikawa, has vowed to beef up the company's corporate governance.

Nissan's profit for the fiscal year that ended in March tumbled to 319.1 billion yen ($2.9 billion), down from 746.9 billion yen the year before, its worst showing since the global financial crisis a decade ago. In this fiscal year it's expected to drop to 170 billion yen ($1.5 billion), due to restructuring, rising material costs and other expenses. Analysts say Nissan's North American operations, potentially a lucrative region for global automakers, especially need a fix.

Saikawa has adopted a cautious stance on the proposed merger, saying it could expand the scope for collaboration and create new opportunities.

"That said, the proposal currently being discussed is a full merger which, if realized, would significantly alter the structure of our partner Renault," he said in a statement Monday. "This would require a fundamental review of the existing relationship between Nissan and Renault."

In the unpredictable world of auto alliances, anything's possible.

It's conceivable that Saikawa is secretly courting another automaker and could make a surprise announcement, according to Satoru Takada, analyst at Tokyo-based consultancy TIW.

But the common wisdom, for now, is that Nissan's options are limited.

It can politely put forward its views as the talks progress and hope to jockey for a better position in the group, Takada added.

There's a risk, though, that Nissan's partners might take advantage of its weaker position to extract one-sided gains from its manufacturing and technological prowess, he said.

"Renault sure did a number on Nissan," said Takada. "Nissan has to work hard to retain its say and its freedom."